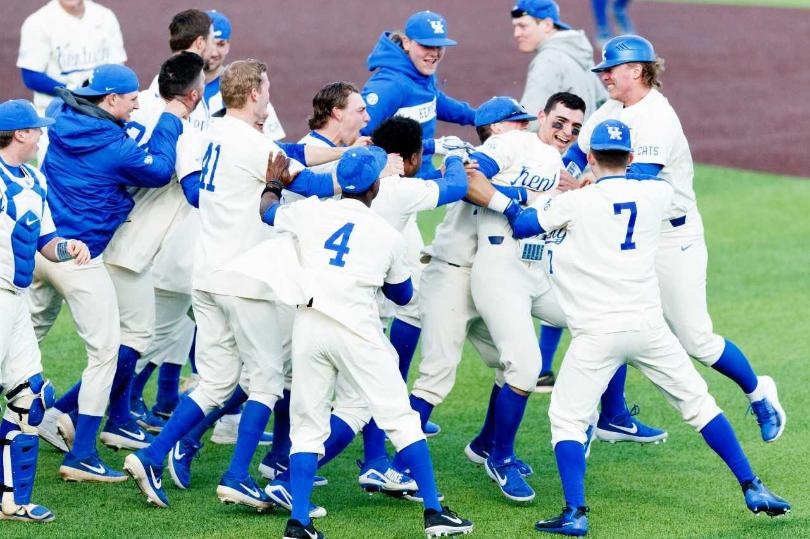 In the first game for the Wildcats, Grant Macciocchi got the start and Carson Lester for Middle Tennessee.  Once again, Grant Macciocchi shoved, throwing 6.1 innings with seven strikeouts, zero walks, zero earned runs, and only allowing one hit.  This game was scoreless all the way to the bottom of seventh inning.

To leadoff the seventh inning, C.Kessler walked.  Alex Rodriguez then hits into a fielder’s choice getting Kessler out on second.  Cam Hill singled through the right-side putting runners on first and second.  Zeke Lewis walked, which loaded the bases with one out.  Breydon Daniel was hit by a pitch, putting the Wildcats up 1-0.  Ryan Shinn flied out to right field, scoring Cam Hill putting the score to 2-0.  TJ Collett walked, loading the bases again, but with two outs.  Jaren Shelby doubled to left center, scoring three runs putting the CATS up 4-0.  Dalton Reed doubled to right field, scoring Shelby increasing the lead to 6-0.  The CATS ended up scoring one more run in the eighth inning.  Middle Tennessee could not get on the board and the CATS hurled the shutout and took the matchup 7-0.

Grant Macciocchi, pitched an incredible game again for the Wildcats.  Cole Daniels ended up getting the win putting him to 2-0 on the season.  Middle Tennessee started Carson, Lester was given the loss for today’s game putting him to 0-1 for the season.  Kentucky was led at the plate today by Jaren Shelby 2-4, Cam Hill 2-4, Breydon Daniel 1-3, and Dalton Reed going 1-4.  This win put the Cats record at 10-4 going into the second game of the twin bill.

Dalton Marsh got the ball to start for the Wildcats in game 2.  Wigginton got the start for Middle Tennessee.  The CATS got on the board first with Jaren Shelby doubling to left field and scoring Breydon Daniel in the bottom of the first.  In the top of the second inning, Thomas homered to left center tying the game 1-1.  Benefield also hit a homerun in the top of second inning, putting the Blue Raiders up 2-1. In the bottom of the third inning, TJ Collettt singled to left field, scoring A. Schultz.  In the top of the sixth inning, Carnevale singled to left field, scoring Marby and Benefield putting Middle Tennessee up 4-2.  The CATS countered in the bottom of the sixth with a sacrifice bunt from M. Gei to score Jaren Shelby to put the score to 4-3.

Going into the bottom of the ninth, Kentucky was down 4-3.  The CATS were desperate, looking for anything to get them going to try and put runners in scoring position.  A. Shultz singled through the right side.  Breydon Daniel sacrificed bunt back to the pitcher advancing Shultz to second base giving the Cats a runner in scoring position with one out.  Ryan Shinn then hit a dramatic walk off home to left field to give the Cats a win!!!  This is the second time in the last week that Kentucky has come back in the bottom of the ninth.

Jimmy Ramsey got the win for the Cats putting him at 2-0 on the season. Tyler Holcombe got the loss for the Blue Raider putting him at 1-4 on the season.  Kentucky was led offensively by Ryan Shinn 2-4 (Walk off home run), Jaren Shelby 2-4, Breydon Daniel 2-3, A. Schiltz 2-4, TJ Collett 1-4, and C. Kessler 1-1. This win puts Kentucky at 11-4 on the season and 8-1 at home. Kentucky looks to keep it rolling as they play Southern Illinois University Edwardsville this Tuesday at 4 PM at home.

Everybody try and get out over spring break and support these Wildcats!!!