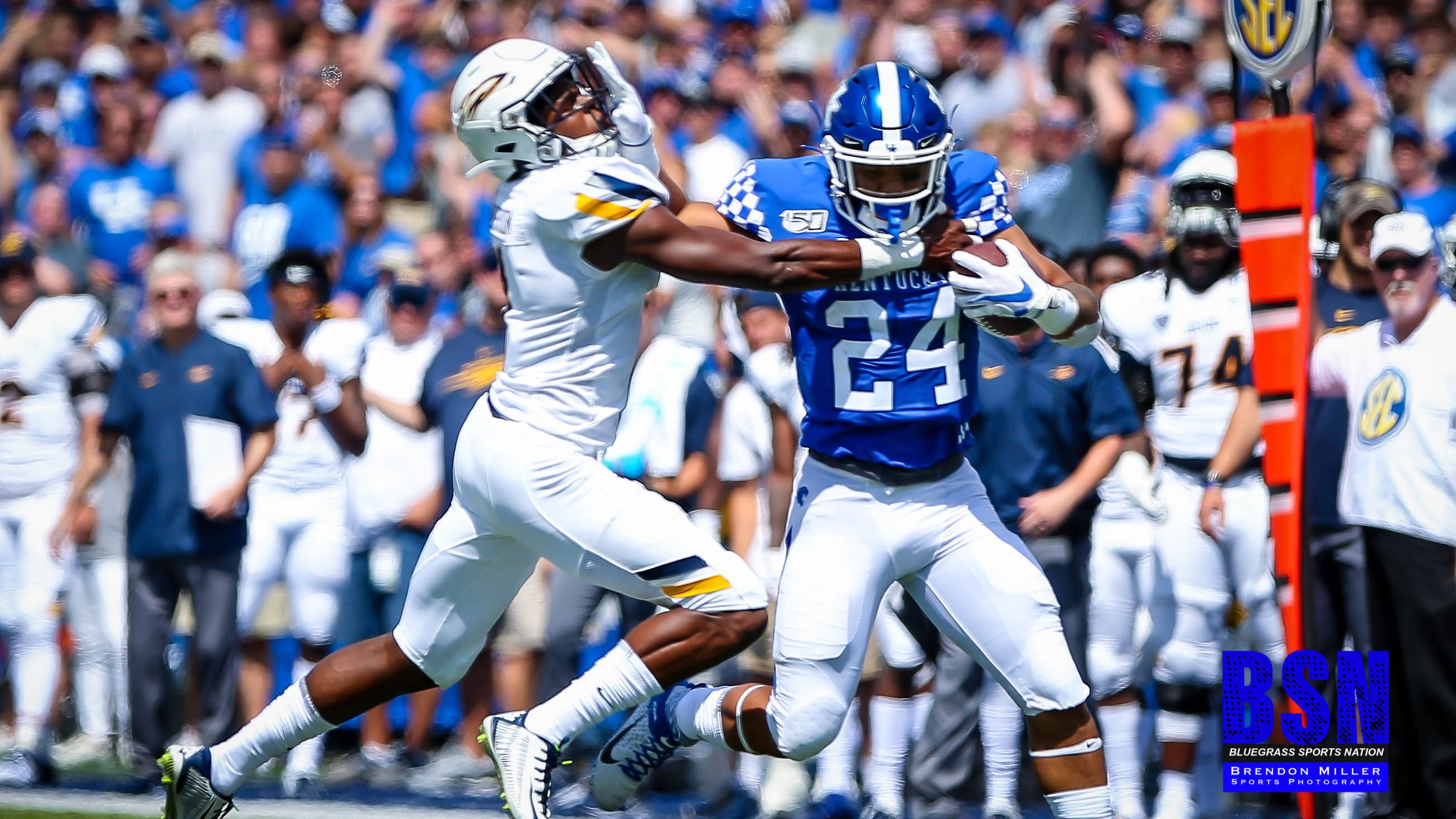 The Kentucky football team started their season today in a home game against Toledo. Toledo got off to a quick start, with Bryant Koback scoring a rushing touchdown from 5-yards out on the first possession of the game. After a three-and-out by Kentucky, the Toledo offense was unable to score, but did get into Kentucky territory. Toledo was forced to punt, and pinned Kentucky on the Cats own 3-yard line. Kentucky methodically marched their way down the field on a 14-play drive, capped off a fumble recovery in the endzone by Justin Rigg for his first career touchdown.

Toledo responded with a 7-play 75-yard drive, which resulted in a 21-yard touchdown run by quarterback Mitchell Guadagni. Toledo led Kentucky 14-7 with 11:31 to play in the second quarter. Each team then traded punts, and Kentucky got the ball on their own 44-yard line. A 29-yard catch by Lynn Bowden followed by a 21-yard run by A.J. Rose setup the Cats at the Toledo 11-yard line. A.J. Rose did the honors with an 11-yard touchdown run, tying the game at 14-14 with 6:01 to go in the first half.

The teams traded punts, and Toledo got the ball on their own 3-yard line with 1:21 to go before halftime. Toledo ran out the clock, and the teams went into halftime tied 14-14.

Kentucky was forced to punt on the first possession of the second half. On the first play of the drive for the Rockets, Bryant Koback fumbled, and Kentucky’s Yusuf Corker recovered. The fumble was forced by Josh Paschal. The Toledo defense held strong, and forced Kentucky to kick a field goal. Chance Poore set his career long by connecting on a field goal attempt from 46-yards. Kentucky led Toledo 17-14 with 11:33 to go in the third quarter.

After the Kentucky defense forced a three-and-out, the Kentucky offense marched down the field covering 67-yards in 5-plays; capping off the drive with a 32-yard touchdown pass from Terry Wilson to redshirt freshman, Bryce Oliver. Kentucky was ahead 24-14 with 7:17 remaining in the third quarter.

After the Kentucky defense forced another three-and-out, Kentucky turned the ball over via a fumble by Lynn Bowden. The fumble, resulted in a 46-field goal kick by Toledo’s Evan Davis. Toledo’s field goal made the score 24-17 in favor of Kentucky with 3:07 left in the third quarter.

A DeAndre Square interception in Toledo territory, setup a 2-yard touchdown pass from Terry Wilson to Josh Ali. Kentucky led Toledo 38-17 with 5:32 to go in regulation. Toledo would score a late touchdown, but it was the Cats that took home a 38-24 victory.