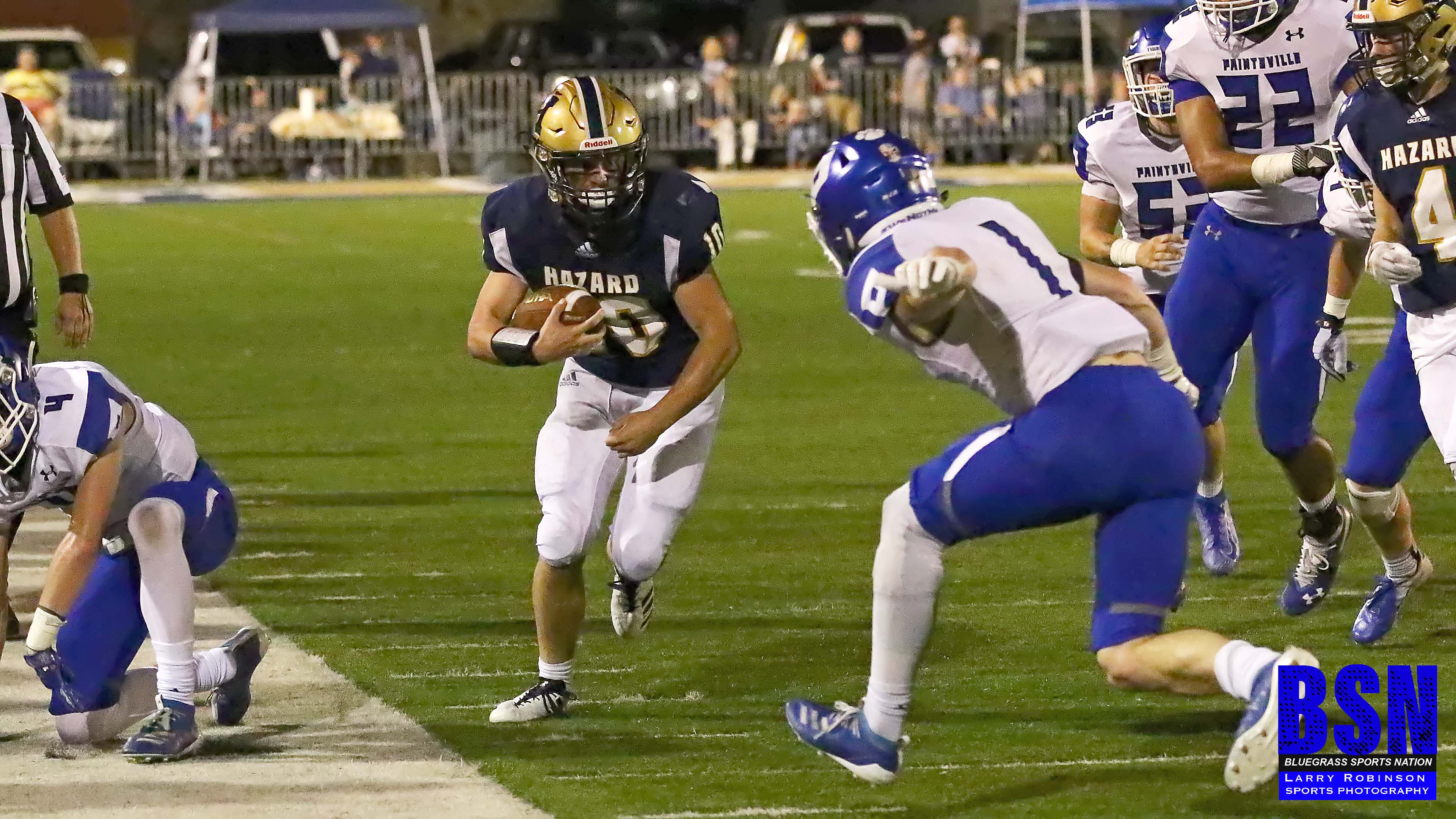 Questions had surrounded this Hazard team since graduation last year. Although they returned some key players, they lost some as well and the question in this early season has been “can those in the vacated positions step up?” Suspect all season long has been an inexperienced secondary and outside linebacker position, positions hit hardest by that graduation. Suspect not necessarily because of bad play, but inexperience and not being tested in big games. With a mix of mainly sophomores and freshman, those positions shined in Hazard’s 23-14 win on Friday night. Not only did those positions shine, they slammed shut the door on the questioning with a ferocity that was felt on every play they were able to put a shoulder pad on Tiger receivers and running backs. In what was Hazard’s most physical game in recent memory, they were able to limit the big plays that Paintsville is capable of on every play and hold off the Tigers for their 4th win of the year.

Hazard would start the night by winning the toss and deferring to the second half. They were able to force a quick three and out on Paintsville’s first series. Paintsville was able to return the favor and coax a punt out of Hazard after a three and out of their own. On the Tiger’s next possession, they bobbled the punt after another big stand by the Hazard defense, and the Bulldogs were set up in Paintsville territory after a short return by Mason Collins. The Bulldogs took advantage of the field position with a Jonah Helm 32 yard field goal to put the Bulldogs up 3-0 early in the 1st frame. The Tigers would then put together an impressive drive, marching down the field until they were able to hit Hazard with one of their big plays and score on a sweep from 25 yards out. This would put the Tigers up 7-3. It was the last time they would own the lead against the Bulldogs. Each team traded a couple of possessions until that Hazard secondary came up big for the first time of the night. After a QB hurry from Brayden Thomas, Andrew Ford was able to haul in the first INT of the night for the Bulldogs. It wouldn’t be the last. The turnover wouldn’t be wasted as Garrett Miller was able to connect with Reece Fletcher on a 35 yard pitch and catch that would put the Bulldogs up 10-7. On Paintsville’s ensuing possession, the Tigers were starting to put something together until the Bulldogs started dialing up the pressure. After being hit as he released the ball, the Tiger QB fluttered a ball up that Mason Collins hauled in and took to the house for a pick six that would put the Bulldogs up 17-7. The Bulldog’s secondary would come up big one more time before half, as on a big 4th down and the Tigers driving, Andrew Ford was able to separate the ball from the receivers hands with a big hit to force an incomplete and let Hazard run out the clock for halftime.

Hazard would receive starting the second half and went straight to work. Reece Fletcher would take the hand off and ramble for 38 yards before being brought down. The Bulldogs weren’t able to put points on the board after a rare Jonah Helm missed FG from 39 yards out. The Bulldogs would trade possessions with the Tigers for most of the 3rd quarter until Paintsville would break free on a 61 yard run that would pull them to 17-14. The fourth quarter started with the Bulldogs driving. The Tiger defense would hold as they were able to force a turnover on downs with the Bulldogs nearing the red zone. It would be the Dog’s turn for a big defensive stand next that was capped off by a huge Matt Couch QB sack to give the Bulldogs the ball back. Four plays later, Reece Fletcher would not be denied the end zone. Running behind his big line of Nate Smith, Thomas Massey, Kenton Beverly, Dalton Strong, Matt Couch, and Ryan Dean, Fletcher ran around, over, through the Tiger defense on his way to a 30 yard run that would set the final score at 23-14. The Bulldogs weren’t done making big plays, though. On the kickoff the Bulldogs special teams were able to pin the Tigers on their own 5 yard line on a big tackle by Zane Deaton. Reece Fletcher would haul in yet another INT for the Bulldogs just 3 plays later. After Paintsville would force a three and out, the Tigers would have one last shot at a score and possible onside kick. The Bulldogs could smell blood in the water and the defense stepped up one more time and following big hits by Tyson Turner and a sack by Brayden Thomas, the Dogs were able to run the clock out after turning the Tigers over on downs.

With the win the Bulldogs move to 4-1 on the season and have officially earned a spot in the talk for 1A East contention. They need to treat this as a stepping stone and not rest on this win because in 2 weeks the #1 team in 1A will roll into Daniel Field. As the season has progressed, this group of young and inexperienced players are slowly transitioning into seasoned varsity players that are capable of winning some big games. It is going to be an exciting second half of the season for the Bulldog fan base if their team continues to improve. Next game for the Bulldogs will be another marquee match-up as they will face the #1 team in 2A, the Somerset Briar Jumpers. This should be a good tune up for the Bulldogs before their big date with the Panthers. Check back in Thursday to BluegrassSportsNation.com for the game preview between the Briar Jumpers and Bulldogs.