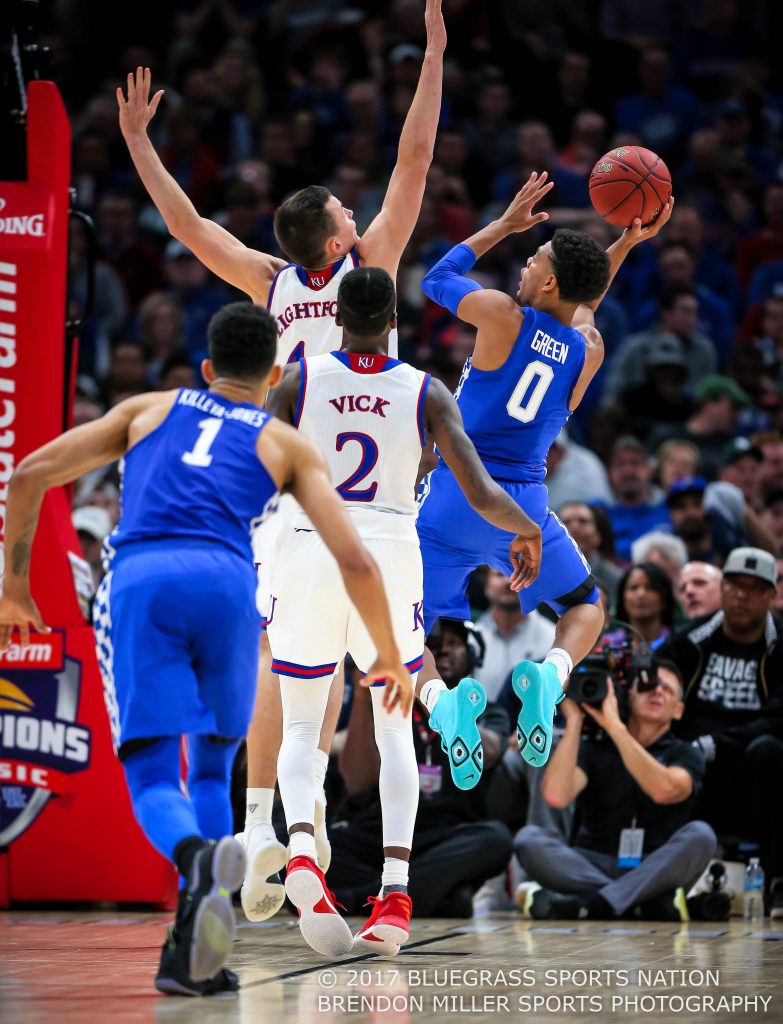 The Night Cap of the Champions Classic, concluded with another battle of the blue bloods.  Kentucky vs Kansas two of the winningest programs in College Basketball history, battled it out in Chicago, Illinois at the United Center the Home of the NBA Chicago Bulls.  The game featured two team’s currently undefeated and both Nationally ranked in the top ten. The game could possible be a preview of the NCAA Final 4, and the hype associated with this game draws a lot of National Attention.

ESPN put the game on at primetime, and was commentated by the Legendary Dick Vitale.  Other than the game just concluded in front of this game of Duke Vs Michigan State, no other early season College Basketball game is as anticipated as the Champions Classic.

In the opening year of the Champions Classic in 2011-2012 season UK vs KU was part of the inaugural event which has become an annual event. UK goes on to defeat the Jayhawks 75-65, and later faced KU for the NCAA championship in New Orleans, Louisiana.  UK goes on to defeat KU 67-59 and win the school’s eighth National Championship. The game has turned into a historic rivalry, but UK leads the all- time series with twenty-two wins and eight losses against Kansas, entering tonight’s matchup.

Kansas gets the ball on the opening tip and scores on their first possession.  #2 Vick Lagerald scores two points on a lay up with 19:48 remaining in the opening quarter.  Kansas 2- Kentucky 0.  Kentucky quickly answers as PJ Washington evens the score at two with 19:21 remaining in the first half.  Tonight’s game against the Jayhawks is Kentucky’s first quality opponent.  Kentucky started five Freshmen, and the CATS found themselves down early in the first half.  With 13:37 remaining in the opening quarter, Kansas had a comfortable lead of eleven points, leading UK 20-9.  Coach Cal calls a quick time out to settle down his young and inexperienced team, and UK began mounting a comeback.  Kevin Knox started to get comfortable and more aggressive with the ball scoring on several possessions.  With 8:49 remaining in the half, UK was only down three points.  Kansas 23- Kentucky 20.  Both fan basses were now heavily involved in the game with fans on edge of their seats and cheering loudly.  UK kept chipping away at the lead and tied the game up @ 28 with 6:17 remaining in the game.  Both teams are now playing their best Basketball and the defensive intensity picked up. After a couple of quick baskets, the teams remained tied @ thirty- two with 2:47 remaining.  With 2:00 remaining in the first half Kansas had a slim one-point lead 34-33. UK had the ball on the last possession of the half and #3 Hamidou Diallo had the ball in his hands, Diallo drives to the basket and shoots a contested layup.  Diallo shot is no good and UK trailed Kansas 34- 33 at the half.  Freshmen #5 Kevin Knox is the leading scorer for both teams with twelve points.

With the second half resuming, and both teams having time to adjust. The second half continued to be a fast paced high intensity game.  Kevin Knox opened the scoring in the second half with a lob dunk from PJ Washington.  Kentucky had the lead, only the second time in the game.  The first lead come in the first half as the CATS were briefly up one point 34-33 for fourteen seconds of game action.  For the Wildcats to start the second half strong is a key to the Wildcats success.  The lead wouldn’t last for long as Kansas regained the lead on the next possession.

The next couple of possessions the teams traded baskets, with neither team backing down and competing with every once of energy in them.  With 15:02 remaining in the half Kansas had a two- point lead of KU 42- UK 40.  Kansas size and experience of Udoka Azubuike, and Malik Newman began to take its toll on the young UK team.  The Forwards routinely got rebounds and second shot attempts, allowing multiple shots from Kansas on several possessions. With 9:16 left in the game KU had a six- point lead, KU 51-  UK 45.  Coach Cal sends in reserves Sacha Killeya- Jones and Tai Wynard, each player hasn’t played much so far in the early season but made some contributions rebounding to and scoring to get the CATS back in this game.  Jones played his best game as a Wildcat grabbing nine rebounds and scoring eight points in the game.

The last couple of the minutes had the feel of march madness.  Each team would score only to be countered on the opposite end by the opposing team.  Kevin Knox continued his impressive play rebounding the ball and scoring.  With 4:32 remaining in the game the game was tied at 57.  Kansas increased the lead to four points as # 14 Malik Newman puts the game out of reach connecting on a pair of free throws, and goes on to defeat the Kentucky Wildcats 65-61.

Kentucky faced their first real test of the season and played a great game.  Kentucky is a very young team and will only get better as the season progresses and the team has time to gel.  Many members of the media expected UK to loose by a significant margin, to only loose by four points to an experienced and nationally ranked Kansas Jayhawk team is impressive.  Nothing for the young CATS to be down about. Kentucky drops on the season to two wins and one loss, and will likely drop in next week’s upcoming polls.  Kansas improves on the season to 2 and 0.  UK’s next game will be on Friday night, November 17, 2017 against East Tennessee State University in Rupp Arena.  Kansas will also play Friday Night In the Miami Hoophall Invitational against South Dakota State.