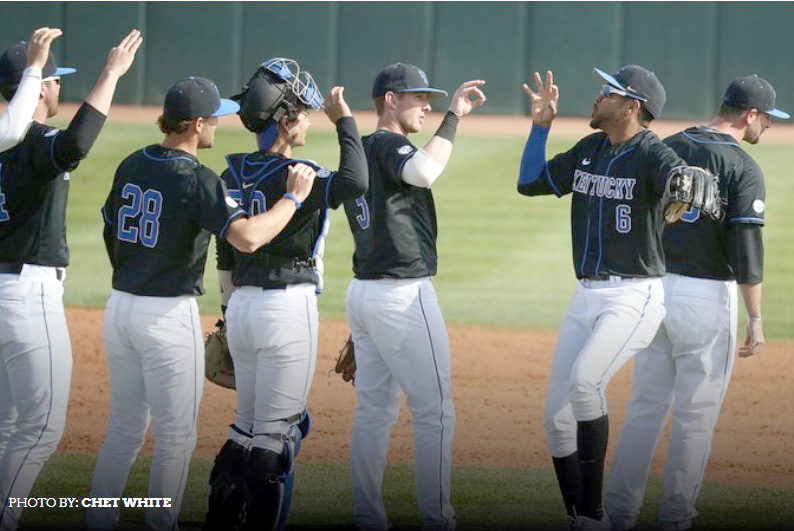 COLLEGE STATION, Texas – Kentucky completed its first sweep of a ranked Southeastern Conference foe in five years with an 11-7 victory over Texas A&M in front of 4,472 fans at a sun-splashed Blue Bell Park on Sunday. It is the Wildcats’ first sweep of a true road series since knocking off Tennessee in 2008.

The Cats (15-6, 3-0 SEC) now have won 13 of their past 14 games and 15 of 17 overall. They trailed after just four of 27 innings on the weekend, setting the tone with Friday night’s complete game shutout by Sean Hjelle, continuing into Saturday’s come-from-behind victory and through Sunday’s sweep-clincher.

Texas A&M came into the series owners of an 80-15 record at Blue Bell Park since the beginning of the 2015 season but the Cats continued to put the pressure on the Aggies throughout, piling up 17 hits on the game and 35 for the weekend. Tristan Pompey hit a tape-measure home run onto the patio of a building beyond the left field wall and Connor Heady homered as part of a career-high four-RBI day to lead the Cats’ attack.

The victory also gave the Cats their first road series victory over a ranked SEC foe since April 2015 at No. 5 Florida. They’ll play at Western Kentucky on Tuesday night before hosting Ole Miss in a three-game set at Cliff Hagan Stadium, where the Cats are an undefeated 10-0 this season.

It was another team effort for the relentless Cats’ offense, with six players recording multi-hit games, including three – Kole Cottam, Riley Mahan and Troy Squires – who had three-hit afternoons. The Cats had five doubles and two home runs on the day, including Tristan Pompey’s moon shot onto the patio of a building across the street beyond the left field wall.

Sophomore righty Justin Lewis earned his third victory of the season with another quality start, lasting 6.1 innings and giving up three runs on five hits. He walked three and struck out four while throwing a career-high 105 pitches. Colton Cleary, Brad Schaenzer and Logan Salow got the final eight outs of the game.

Top 5th – Squires singled with two outs and scored on Marshall’s double. Heady doubled off the RF wall to score Marshall. Carson reached on a bunt single and Heady came around to score when the A&M first baseman couldn’t hang onto the throw. UK 9, TAMU 1.

Kentucky travels to Bowling Green Ballpark to face Western Kentucky on Tuesday night, the return game for UK’s 17-2 victory in Lexington on March 1. Fans can listen on the UK Sports Network via UKathletics.com and iHeart Radio, as well as on 630 AM WLAP.