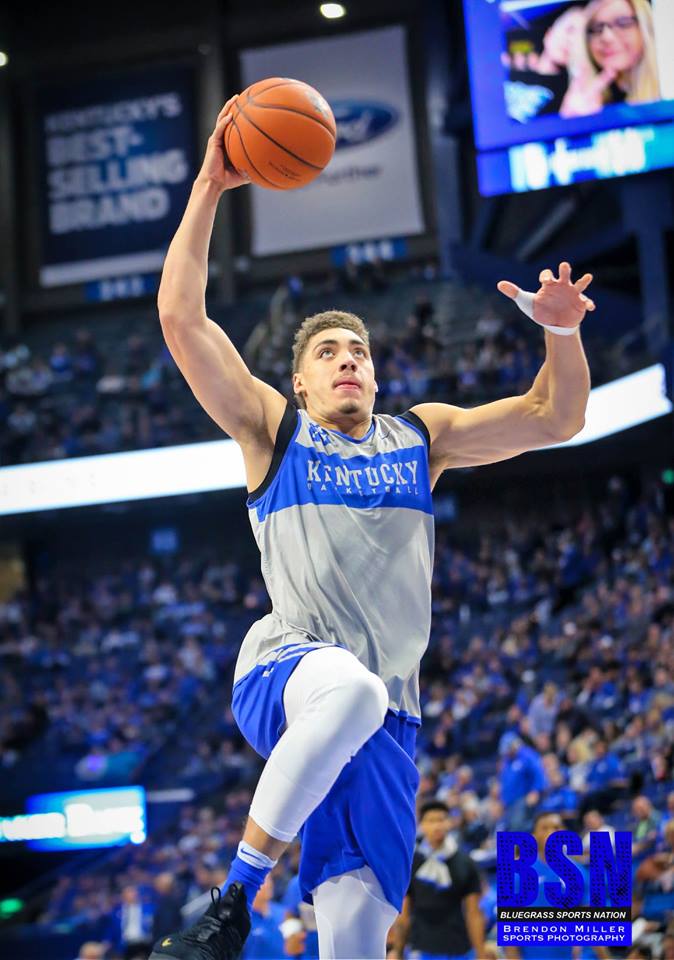 Reid Travis with the drive – Photo by Brendon Miller – BSN

The annual Blue/White game is more than just an inter-squad scrimmage. It is the Big Blue Nations first glimpse of their Wildcats in Rupp Arena. Big Blue Madness offers an introduction of players, but it is the Blue/White game that gives the fans game-time action with defense being played. This year the fanbase was blessed with the early games played in the Bahamas, but for the average fan this is the first time to see the team in person.

The game began with Green, Johnson, Richards, Quickley, and Washington starting for the Blue Team. The White Team started Hagans, Baker, Herro, Travis and Montgomery. The first half was tightly contested with the White Team leading the Blue Team 52-51 into the break. Transfer, Reid Travis, lead all scorers going into the half with 16 points. Travis also shared in leading the first half in rebounds with Nick Richards with each player earning seven.

Much like the first the teams went back-and-forth in the second half and the score stayed close. It wasn’t until the Blue Team went on a 16-point run that they would pull ahead for good. The Blue Teams 104 to 96 victory was led by P.J. Washington’s 23 points, but more impressive was Tyler Herro’s 34 points on 12 of 16 shooting and 4 of 6 from behind the arc. Nick Richard’s led both teams with 16 rebounds.

Overall the team looked great. They moved the ball well in transition and had great ball movement in the half-court game. It is evident that the extra practice for the games in the Bahamas helped this team. Besides the 14/15 season remember a Kentucky team that looked this polished this early. It may be what gives Kentucky the edge over Duke in the first regular season game. The Cats will take the floor Friday in their first exhibition game against Transylvania at 7:00 P.M. on the SEC Network.