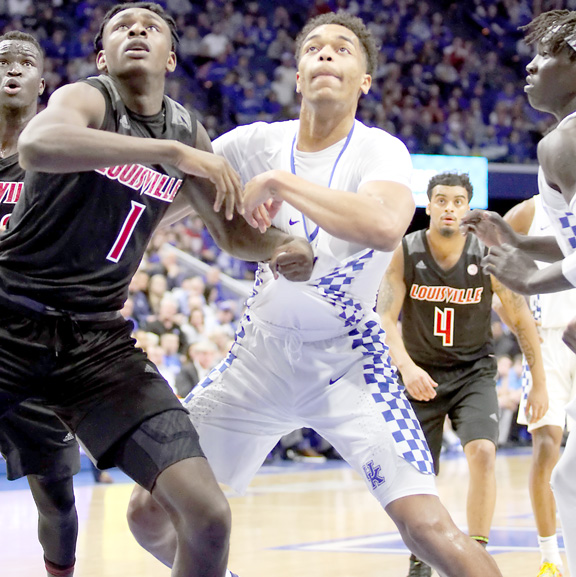 Rivalry games bring a great deal of emotion from both the fans and the players alike.  For fans, it is mostly and intense dislike for the opposing fan base.  They live through the rivalry 365 days a year.  For players, they do not want to lose bragging rights by losing to the rival.  However, most of the players on this year’s Louisville and Kentucky teams did not grow up in the state so they don’t completely understand the intensity of the rivalry.

The emotions of today’s game were polar opposite for both teams.  Louisville came out and played with great emotion in the first five minutes, jumping out to an 11 – 5 lead.  Kentucky responded with a three-pointer by Shai Gilgeous-Alexander.  From there it was all Kentucky as they completely destroyed Louisville 90 – 61.

Foul trouble plagued the Cardinals the entire game, especially in the first half as six U of L players had two fouls each.  U of L did tie the game at 21, but U of K responded with a 20 – 6 run to lose out the half with a 41 – 27 lead.

The second half didn’t go any better for the Cards as Kentucky pushed their lead to as much as 32 at one point.

There were no bright spots for the Cards.  It was so bad that at one point they had five guards on the floor.  They were outrebounded 44 – 37 in what continues to be a weak are for the Cards.  They could not buy an outside shot as they made only 3 of their 25 three point attempts.  Passing was stagnant with only 10 assists.

The only bright spot for the Cards was the continued solid play of Ray Spalding.  He finished with 12 points and 11 rebounds.

Shai Gilgeous-Alexander came off of the Bench for Kentucky to score a game-high 24 points.  P.J. Washington scored 16 for the Wildcats.  Hamidou Diallo and Quade Green scored 14 and 13 points respectively.

The loss moved Louisville to 10 – 3 on the season.  They are now finished with the non-conference portion of their season.  ACC play begins with a home game against Pittsburgh on Tuesday at 9:00.