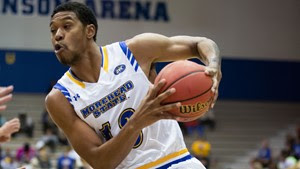 STARKVILLE, Miss. – Morehead State men’s basketball jumped out to a 41-31 halftime lead before falling at Mississippi State on Thursday night, 85-76.

With the loss, the Eagles fall to 3-9 on the year, while the Bulldogs improve to 8-3.
“We knew that a good team like Mississippi State would come out and the crowd was going to get into it in the second half,” said interim head coach Preston Spradlin. “That first four minute segment of the second half was extremely important and they came out and hit shots. To our guys credit, we fought back after they got the lead, but we still need to tighten up things down the stretch.”

Senior guard Xavier Moon and sophomore forward Lamontray Harris led the charge in the first half with ten points each as Morehead State jumped out to a 41-31 lead.

The Eagles shot 57 percent and outrebounded the Bulldogs, 20-12, in the first stanza.

But, Mississippi State hit three three-pointers and started the second half on a 13-4 run to trim the Eagles’ lead to 45-44.

The Bulldogs led by as much as five midway through the second half, but Morehead State battled back to tie it at 60-60 on a layup by freshman guard Jordan Walker with 8:05 to go.

However, Mississippi State answered with another run, this time of the 9-2 variety, and Morehead State failed to get it closer than three points the rest of the way.

Moon led the Eagles with 22 points on 9-of-14 shooting and was 2-of-6 from three-point range. He also finished with a team-high five assists and three steals, and hit some big shots down the stretch to keep Morehead State in contention.

Harris finished with 20 points off the bench and started the game 7-of-8 from the floor and 2-of-2 from deep, before finishing 7-of-11. He also led the team in rebounds with seven.

Sophomore guard Quinndary Weatherspoon led the Bulldogs with 27 points on 10-of-17 shooting.

But, the Eagles turned it over 16 times, while Mississippi State committed just five turnovers. It marked just the second time this year that Morehead State has lost the turnover battle.

Following a short break for Christmas, the Eagles return home to host Asbury (Ky.) on Wednesday night on 7 p.m. ET.