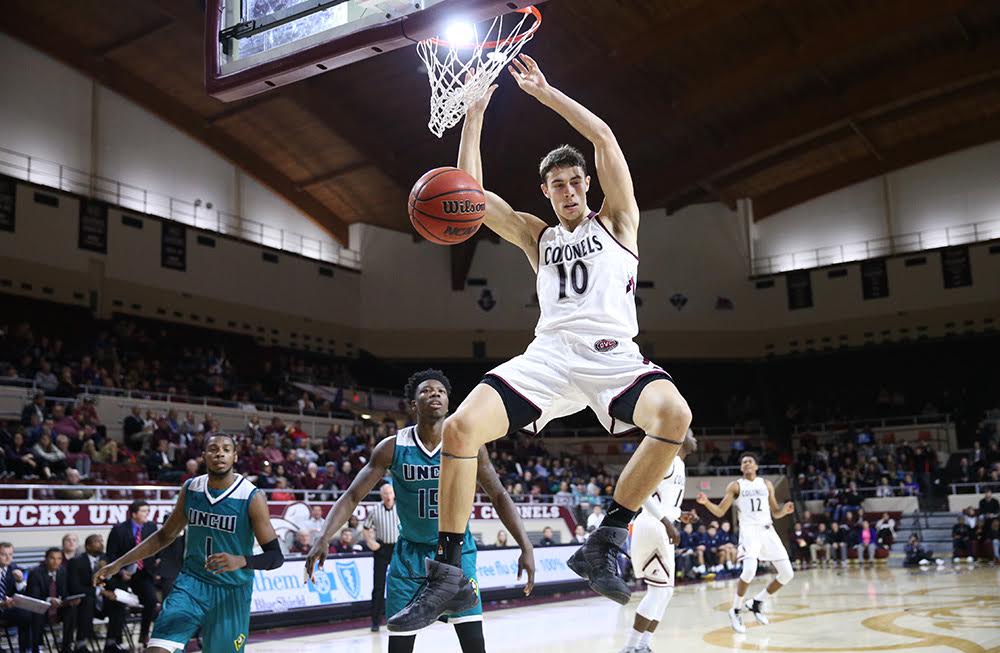 A free throw by freshman guard Asante Gist pulled EKU (1-1) to within two, 63-61, with just over a minute to play. Gist then forced a turnover on the other end and, on Eastern’s ensuring possession, found junior forward Zach Charles in the paint, who was fouled. Charles knocked down two clutch free throws with 25 seconds on the clock to force the extra period.

The Colonels scored first in overtime, but UNCW (2-0) responded with an 11-4 run to put the game away.

Eastern was led in scoring by sophomore forward Nick Mayo, who poured in 20 points, pulled down seven boards, and converted all six of his free throws. Gist chipped in 15 points, two assists, and one steal, while senior guard Isaac McGlone scored 13 points on perfect 3-of-3 shooting from deep.

Charles scored six points and pulled down a game-high 14 boards. Charles’ 14 rebounds are the most by a Colonel in a single game since Jaron Jones notched 14 versus SIUE on February 23, 2012.

The Colonels found themselves in their largest hole, down 28-11, when Ja’Quel Richmond knocked down a jumper with 7:23 to play in the first half; however, EKU closed out the period on a 11-4 run and, following a pair of free throws by freshman Parker Chitty, went into the locker room down by only 10, 34-24.

The Seahawks, however, answered, and went back up by as many as seven, but McGlone scored five of the next seven Colonel points to bring it back to a three-point deficit, 61-58, with 3:21 to play. With just under two minutes on the clock, senior Jaylen Babb-Harrison sank two free throws to make it a one point deficit, 61-60.

EKU limited UNCW to 15 percent (3-of-20) shooting from deep to help mount the comeback.

UNCW is the defending Colonial Athletic Association (CAA) champion and came into the game ranked No. 7 in CollegeInsider.com’s Mid-Major poll.

The Seahawks were led in scoring by C.J. Bryce, who dropped a game-high 21 points.

The Colonels will now travel to Alabama to take on the Auburn Tigers on Thursday night as part of the Cancun Challenge. Tipoff is scheduled for 9 p.m.