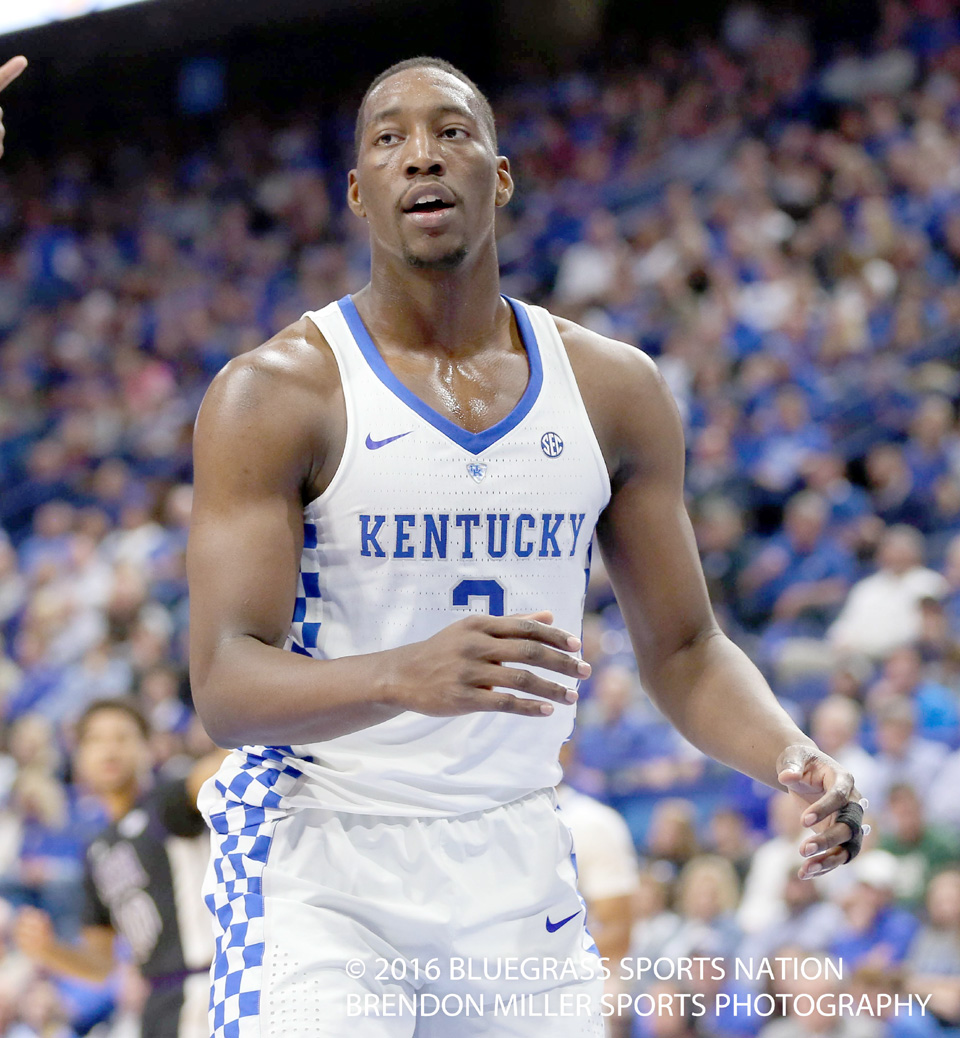 BIRMINGHAM, Ala. – On the eve of the college basketball season’s opening night, four Kentucky Wildcats were tabbed to the Southeastern Conference coaches’ preseason All-SEC first and second teams on Thursday. Freshmen Bam Adebayo and De’Aaron Fox were named to the first team, while sophomore Isaiah Briscoe and freshman Malik Monk earned second-team honors.

The coaches’ preseason All-SEC first and second teams consist of a minimum of eight players on each squad, voted on by the SEC head men’s basketball coaches. No ties were broken and no predicted order of finish was made.

Ten different schools are represented at least twice, with Kentucky leading the way with four selections. In all, 31 different players received votes for the coaches’ teams.

All four players were sensational for the Wildcats in their two tune-ups vs. Clarion and Asbury. All four averaged double-figure scoring as the Cats won by an average of 75 points per game.

Adebayo was the North Carolina Gatorade Player of the Year after averaging 18.9 points and 13.0 rebounds for High Point Christian Academy as a senior. He was an All-USA Boys Basketball Second Team selection and a McDonald’s All American Game Morgan Wootten Player of the Year finalist. He led High Point to an appearance in the state title game, while also earning selection to the McDonald’s All American Game and the Jordan Brand Classic.

He dished out three or more assists in 15 of his final 23 games played and had a pair of double-doubles. The Newark, New Jersey, native ranked ninth in the league a season ago with 32.2 minutes played per game. Following his freshman season, he ranked among top-10 performers in the Calipari era in total assists, assist-to-turnover ratio and assists per game for a single season. In UK’s two preseason games, Briscoe logged 11.0 points per game and team-highs in both total assists (18) and steals (7).

Fox is a Naismith High School Player of the Year finalist, and was named a first-team selection his senior season for both the All-USA Boys Basketball and the Naismith All-America squads. He played in both the McDonald’s All American Game and the Jordan Brand Classic. In the latter, he earned co-MVP honors with Monk after scoring a game-high 23 points on 8-of-16 shooting to go along with five rebounds.

Fox was a three-time all-state performer out of Cypress Lakes High School in Texas. He was tabbed the Texas Gatorade High School Player of the Year in 2016 after leading Cypress Lakes with a pair of back-to-back 40-point performances in the Texas high school state playoffs. The 6-foot-3 guard was ranked as the No. 6 overall player in the class of 2016 by ESPN, Rivals, Scout and 247Sports. He led the team in scoring in UK’s exhibition season with an average of 18.5 points per game. He also chipped in with 5.5 assists and 3.0 steals per game.

An explosive 6-foot-3 guard, Monk is capable of scoring in a variety of ways. He captured the 3-point shooting contest at the McDonald’s All American Game and finished runner-up in the slam dunk contest showcasing his athleticism.

Monk was the 2016 Arkansas Gatorade High School Player of the Year in addition to earning the state’s Mr. Basketball award. He averaged 28.6 points, 7.5 rebounds and 4.4 assists per game as a senior at Bentonville. Known for his scoring ability, Monk set a single-game school scoring record with 53 points in a game during his final campaign. A consensus five-star athlete out of high school, Monk was rated as the No. 9 overall player by ESPN and Rivals, No. 10 by 247Sports and No. 13 by Scout. Monk showcased his versatility in a variety of ways in UK’s exhibition slate, including averaging 15.0 points, 4.5 assists and 3.0 steals per game.