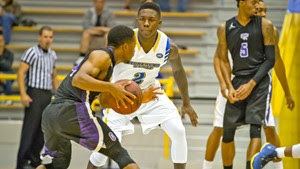 “I was very pleased with the new guys,” said head coach Sean Woods. “I thought they came in and played solid, hit open shots, and took care of the basketball. These young guys are really refreshing to watch.”

Morehead State outgunned its opponent on 9-for-18 (.500) shooting from three-point range, including 3-for-4 from Walker. The Eagles rounded out the afternoon with 58 points in the paint to Cincinnati Christian’s 10, and converted 24 points off 17 forced turnovers.

Sophomore guard Malik Maitland poured in 11 of his 13 points in the first half, and dished out four assists in 20 minutes of action. Ty’Quan Bitting (12 points, seven rebounds) and Djimon Henson (10 points, four rebounds, four assists) capped off the double-digit scoring for the Eagles.

Morehead State broke off a 21-0 run that highlighted a 52-29 lead at halftime, and ended the contest with 10 consecutive points over the last 3:29. All 14 players on the roster made their way onto the scoring column.

“For the most part, we were solid as a rock,” Woods said. “The older guys have to be major factors, and these new guys have got to be prepared to step in to play.”