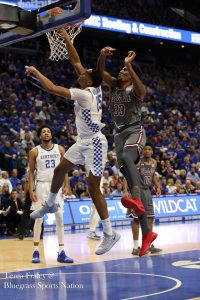 The #2 Kentucky Wildcats looked to get back on track tonight in Lexington, Kentucky as they took on the Southern Illinois Saluki’s at Rupp Arena with a 7 PM tip-off Eastern Time. The Wildcats were coming off a 34-point loss from an outstanding performance to the #4 Duke Blue-Devils.

Duke hit four threes to start the game and the Wildcats panicked and reverted to their Highschool ways. Coach Calipari believes that the team was not physically nor mentally ready going into the Duke game, and that was on him. The Wildcats have had a few days back in Lexington to get mentally prepared and didn’t show it to start the game. Kentucky needs to look to improve their three-point shooting as they shot 24% from deep against Duke and to take care of the ball better, as they turned the ball over fifteen times in that game and gave up twenty-six fast break points. The Wildcats really need to buckle down on defense and improve their guard play going forward. Also, they need to believe in one another and play as a team if the Wildcats plan on making a run in March. For the Southern Illinois Saluki’s this was their home opener, and they would not have wanted to play the Wildcats at a better time, then after a blowout loss to Duke with the Wildcats questioning their talents. The Saluki’s returned Armon Fletcher who was their leading scorer last year and a two-time All-MVC pick.

In the first half, Kentucky got down to a 7-2 lead. Kentucky came out not closing out on defense, which led to wide open three-point opportunities for the Saluki’s. Kentucky came out of a timeout down 10-5 in a full court press. The wildcats continued to let the Saluki’s shoot threes, as if Kentucky was playing zone. Kentucky had six turnovers within the first six minutes of the game. Immanuel Quickley converted on an And-One opportunity that cut the deficit to 13 to 8. Kentucky went for almost any ball fake that was attempted against them no matter where it was on the floor. Keldon Johnson tied the game up 19-19 on a transition layup that got the BBN fanbase into the game.  Quade hit a 3 to give Kentucky the lead with 5 minutes left in the first half at 22-19. Washington and Hagans both picked up their second fouls in the late first half, forcing them to sit out the remainder of the half. Nick Richards rebounded the ball extremely well in the first half, coming down with 12 rebounds. Kentucky went into the half with a 31-28 lead. The Wildcats outrebound the Saluki’s 25-8 in the first half. However, the Wildcats went into the half having turned the ball over 14 times. At the end of the half Johnson was leading the team in scoring with seven points.

To start the half Southern Illinois came out and took the lead 36-32. Immanuel Quickley hit a three at the 16-minute marker to put the game to 38-37 and to put him in double digits.

UK came out in a full court press and got beat on the back of it for an uncontested dunk to put the score to 40-37. Southern Illinois then comes down and converts an and one, but misses the layup. Kentucky’s next possession turned into a turnover by Nick Richards giving Kentucky their 17 turnover of the game which gave another and-one that lead Kentucky to call a timeout. Fortunately, Southern Illinois did not convert getting the lead to 46-40. Quickley then hits a three, cutting the lead to 46-43. Quade Green comes down and banks in a contested two pointer, shortening the lead even more to 46-45. EJ Montgomery has a nice put back off of a missed three by Quade Green, giving the wildcats a 47-46 lead. Kentucky comes back down the court lead by a Quade Green break and contributes a nice pass that lead to an EJ Montgomery dunk. Southern Illinois get the game back to 51-50 by another bad closeout on defense and allowing an uncontested layup. Keldon Johnson has a power dunk at the 8:45 mark that brought the crowd to their feet in Rupp.

This game came down to the end with the Wildcats taking this one in Lexington with a final score of 71-59. The Wildcats move to 1-1 on the getting their record back to .500. Kentucky really needs to cut down the turnovers and the breakdowns on defense. Kentucky forced a lot of unnecessary shots. The Wildcats need to come out with more energy like they played with in the second half. Kentucky seemed as if they were just going through the motions for quite a bit of the game, until late in the second half. They need to play team basketball and believe in each other more and I believe we will be fine the rest of the season. Coming into this season a lot of people thought PJ Washington would be the go-to player for this team, but from the first two games he hasn’t showed that. The Wildcats continued to turn the ball over tonight with a total of 19 turnovers. The guard play for Kentucky has got to improve for them to be a serious threat this season. The Wildcats will be on the hardware again Wednesday as they take on North Dakota. The Saluki’s will play again Monday against Buffalo as they seek their first win of the season. Kentucky was led in scoring by Quickley and Johnson who both chipped in 15 points on the night, Richards led them in rebounding coming down with a huge 19 rebounds. The Saluki’s were lead in scoring by Cook who ended up with a respectful 18 points against the #2 ranked Kentucky Wildcats and led in rebounded by Kavion Pippen who had 7 rebounds, Pippen happens to be Scottie Pippen’s nephew.

In the post-game interview Southern Illinois Head Basketball Coach Barry Hinson told us Wildcat fans not to panic. A statement that really got the crowd was “You can’t microwave maturation.” He was referring about our young team and that maturity take times, it can’t just happen overnight. He believes the Kentucky Wildcats will be fine in March, especially with the guy who’s driving the bus. Coach Hinson believed Quickley’s two three-pointers back to back was the turnaround in the game. Closing statement Coach Hinson was satisfied with the way his team played and mentioned that their star player Armon Fletcher only got to play for 15 minutes. Coach Calipari gave the Kentucky fans some hope in his interview. He mentioned that we as a team played more aggressive tonight. The turnovers that we are having off of loose balls, lob passes, and no look passes and that the team is going to watch film carefully tomorrow and he is going to point out every single turnover and ask the player was that pass necessary. Calipari bragged on Nick Richards has he recorded just as many rebounds as Southern Illinois. Calipari believes that Nick needs to be on the court at all times as you could tell against Duke when Richards was out of the game, the Blue Devils shot lay-up after lay-up and that we have to have a shot blocker in the game. Coach also believes Tyler Herro isn’t taking the open shots and forcing shots at time. He thinks Herro needs to know when he is going to shoot the ball before he catches it. Calipari is happy that Herro is struggling early and that it will help him grow and deal with these problems early. Coach also does not think PJ Washington is comfortable yet with the hand he had an operation on in the offseason. He also mentioned that the treadmill has been brought back out and that the team will become more disciplined and he is still excited about this team.