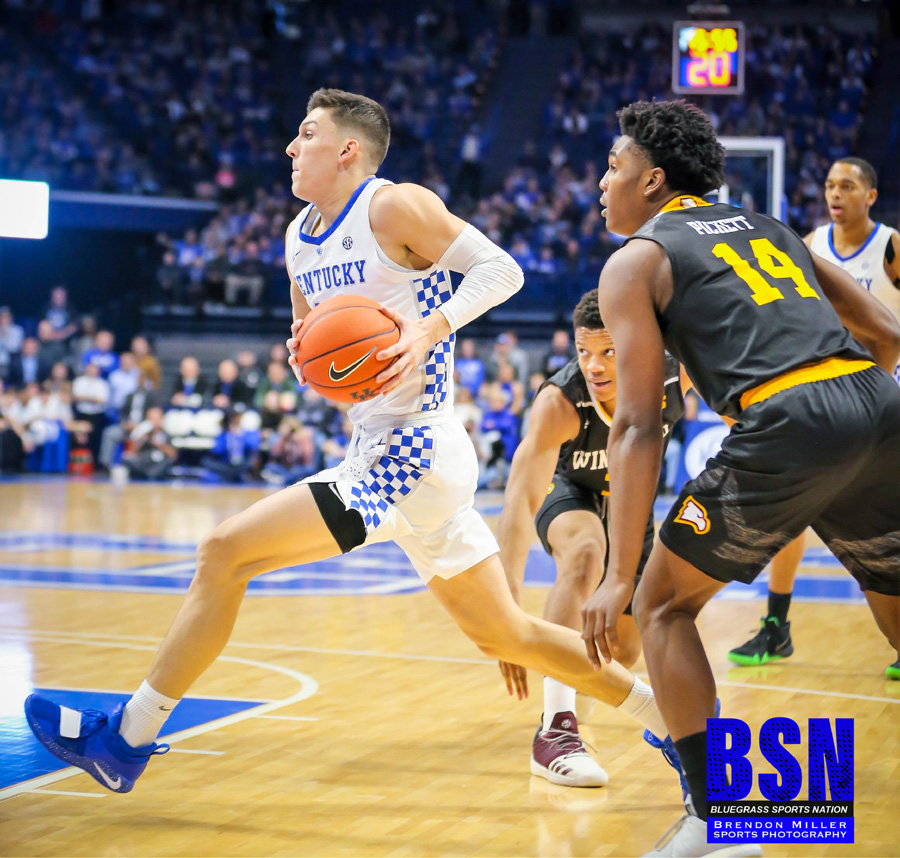 The #10 Kentucky Wildcats looked to continue the three-game win streak coming into today’s game against Winthrop, with a 1:00pm Eastern time tip-off. Winthrop is coming into today’s game with a 2-2 record, with their previous loss to East Tennessee State being a two-point loss. The Eagles are averaging 10.3 made three-pointers per game, which is not good for the Wildcats, as they have struggled defending the three-point line early this season. The Wildcats are allowing their opponents to shoot .434% from deep this season.  PJ Washington is coming off a good game against VMI, where he had 19 points and a career high 18 rebounds. Quade Green is coming off a big game, scoring 17 points off the bench. Reid Travis had another big game against VMI scoring 22 points and coming down with six rebounds. Travis took a hard hit to the eye last game, and is playing with glasses today, which hopefully doesn’t affect him. The Wildcats need to cut down on turnovers and look to turn the Eagles over today as they are averaging 17.3 turnovers a game, and with the Wildcats length and athleticism should be to an advantage.

To start the game on Kentucky’s first possession, Tyler Herro assisted a lob to PJ Washington to get the Cats up 2-0. Winthrop’s second possession was of course another three-point attempt to put them up 3-2. Kentucky controlled the tempo early getting a 7-3 lead. From a fan’s perspective, it looked as if the Wildcats came out with the most energy, I have seen so far this season, despite the score. Herro, staying in attack mode, penetrates the lane and assisted EJ Montgomery with a nice dunk. Next possession down, Keldon Johnson hits his second three-pointer, putting Kentucky up 14-8 at the 15:27 marker, with Winthrop calling a timeout. Back to back three-pointers by Quade Green and Immanuel Quickley, put the Cats up 22-10, giving the Cats momentum. Winthrop’s next possession turned into a four-point play by a three-point field goal and a free throw putting the score to 22-16. Reid Travis dominated the paint early, looking like a grown man. The Cats go on an 8-0 run putting the score to 30-16. Tyler Herro, going up with a strong take, takes a hard fall, causing him to come out of the game and go back to the locker room. Herro checks back in with 7 minutes remaining in the half, getting a crowd applause and scores on that very play. Hagans has a nice take, giving him his first points of the game, which is good to see after he has struggled early this season. PJ Washington scores on two consecutive possessions putting the Cats up 48-34.

The Cats go into the half with a 51-33 lead.  Kentucky finished the half, dominating the boards, pushing the ball, and attacking the glass. Going into the half, Kentucky outrebounded Winthrop 25-10. Kentucky is still struggling defending the three, as Winthrop shot 7-17 at the half from deep, but having missed their last final three-point attempts. At halftime PJ Washington led us in points and rebounding with 13 points and 8 rebounds. Washington and Travis could not be stopped in the post in the first half, even being fronted and double teamed once they caught the ball. Kentucky still turned the ball over, going into the half with 9 turnovers and only forcing the Eagles to 8 turnovers.

The first basket of the second half was off a missed Keldon Johnson three-point attempt with a Nick Richards dunk. Next trip down the floor, Tyler Herro hits a three to go on a 5-0 run straight out of halftime. To start the second half, Kentucky goes on a 9-0 run putting the lead to 62-37, forcing Winthrop to call a timeout. You can feel the energy in Rupp Arena early in the half, which is not a good feeling for the opposing team. Quade Green has a nice steal and finishes with a lay-up on the other end. Quade turns the ball over on two straight possessions, being replaced by Tyler Herro. Herro has a nice assist to Keldon Johnson for a dunk, giving Herro his 6th assist of the game. Tyler Herro starts to get hot as he scores 11 points this half, with two three-pointers and picking up his 7th assist. Winthrop continues to make it rain from deep with over half of their points coming from the three-point line. Zunic for Winthrop hits two three-pointers on back to back possession cutting the Wildcats lead to 79-62 with 6 minutes left. Winthrop is 13-27 from deep currently, with that being 48.1 percent. Not a good sign from the Cats, as defending the three is something they have been needing to improve on.  Winthrop goes on an 8-0 run, that being stopped by a strong Keldon Johnson take. PJ Washington has another strong take with 3 minutes left to go in the half giving him 19 points on the day.  Kentucky holds on to beat the Eagles with a score of 87-74, the game was not as close as the score indicates.

The Wildcats improved their record to 4-1 today. Kentucky was led in scoring and rebounding by PJ Washington. Winthrop was led in scoring by Falden who had 11 points and rebounding by Ferguson who came down with 8 boards on the night. Winthrop looks to get back in the winning column as they take on Warren Wilson on Saturday. The Wildcats have tomorrow off, with it being Thanksgiving and look to get back at it Friday as they take on Tennessee State at Rupp. The BBN showed up more than I thought they would for today’s game, except for the eruption zone, but with the dorms closing, a lot of students had no place to stay. The Cats looked better today, playing with more energy. Kentucky played more team ball today instead of trying to play one on one. After the initial push in transition, Kentucky looked to run through their offense. As a fan, who has been to every home game so far this season, it was the most electric I have felt in Rupp Arena this season.  Kentucky outrebound the Winthrop 37-22. Kentucky still turned the ball over quite a bit today, ending the game with 19 turnovers, the same as the Eagles. Going into a short holiday break, I am confident in the improvement I am seeing out of the Cats and has me extremely excited for the rest of the season. If Kentucky can cut down on the turnovers and defend the three-point better, I have a feeling it will be a good season.