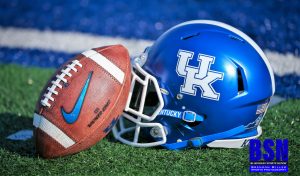 When first looking at the matchup between the Wildcats and the Blue Raiders the stat that stands out the most is how well Middle Tennessee can score. They are averaging 30.4 points per game. They also had a 61-point game against TN-Martin and a 51-point game against Old Dominion. However, the two SEC opponents, Georgia and Vandy, that they have played this year held the Raiders to only 7 points each game. With Kentucky’s inability to put points on the board, the last thing that they want is a high scoring game.

Middle Tennessee’s offensive strength comes from their passing game. They average 240 yards per game and 7 yards per passing attempt. Kentucky’s game plan should be to run the football against the Raiders. Middle Tennessee are allowing their opponents to rush for an average of 165 yards a game. Benny Snell hasn’t been the dominating running back as of late, but with it being perhaps his last game at home look for him to want to put on a show.

Middle Tennessee’s quarterback, Brent Stockstill, is a dual threat quarterback who has scored 23 touchdowns for the Raiders this season. This will be Kentucky’s defense main concern on Saturday. Josh Allen and the rest of the linebackers will have to disrupt Stockstill to keep the scoring low.

The loss in Knoxville was unbearable to watch. The lack of offense worries me in this game also, but our defense should be able to slow down the Raiders enough to allow for a Kentucky win. I am giving the Cats the edge 24-17 with a 175 yards from Benny Snell.