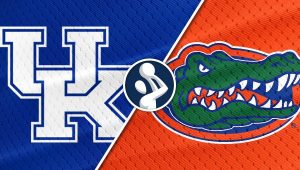 Kentucky has also been part of the game day broadcast at the opposing team’s arena several times as well.  Last year Rupp Arena was part of the Game Day Celebration as the Kansas Jayhawks visited Rupp Arena on January 28, 2017.  Kansas Defeated the Kentucky Wildcats 79- 73 in last year’s event. In total Kentucky is fourth in all time appearances with 16 since the 2005 season.  Surprisingly, UK has a losing record of 5-9 and a winning percentage of .357 during the coverage of game day.

Fans braved the weather and showed up, amped up for today’s event.  Approximately 1/4 of Rupp Arena was filled with Wildcat fans who come out to attend the event.  Today’s crowd was a good crowd but was nowhere near the 22, 144 that attended the event on February, 13, 2010 the Game UK was ranked #2 in the Country hosting the #12 ranked Tennessee Volunteers.  The 2010 Game day is the largest crowd to ever attend game day at any location.  Kentucky won the game, defeating the Vols 73-62.

The UK band, and cheerleaders attended the event, and rallied the Rupp Arena Patrons with the UK Fight song.  Typical UK Chants of Go Big Blue, and C-A-T-S CATS CATS CATS was common during today’s production.  Students made home made signs, and a few spectators had painted their faces or wore costumes to today’s event.  Coach Calipari attended the event and was interviewed by the Game Day Crew.  The event featured a half court shot in which a student was given the chance to win $18,000 if the student makes the shot from the half court.  Unfortunately, the student did not make the shot, but was close on a couple of shots rimming the ball around the rim.  At, the conclusion of today’s event The Analysts were asked their projection of various games taking place throughout the country.  As the show concluded of today’s event Host Reece Davis asked analyst Jay Williams his projection of today’s UK vs Florida Game.  Williams hesitated momentarily with his answer but in the end unbuttoned his shirt and picked UK to prevail in tonight’s contest.  Rupp Arena was insane and the fans cheered loud with excitement.  CATS fans will need to keep the excitement going as UK hosts Florida in a crucial SEC East Showdown.