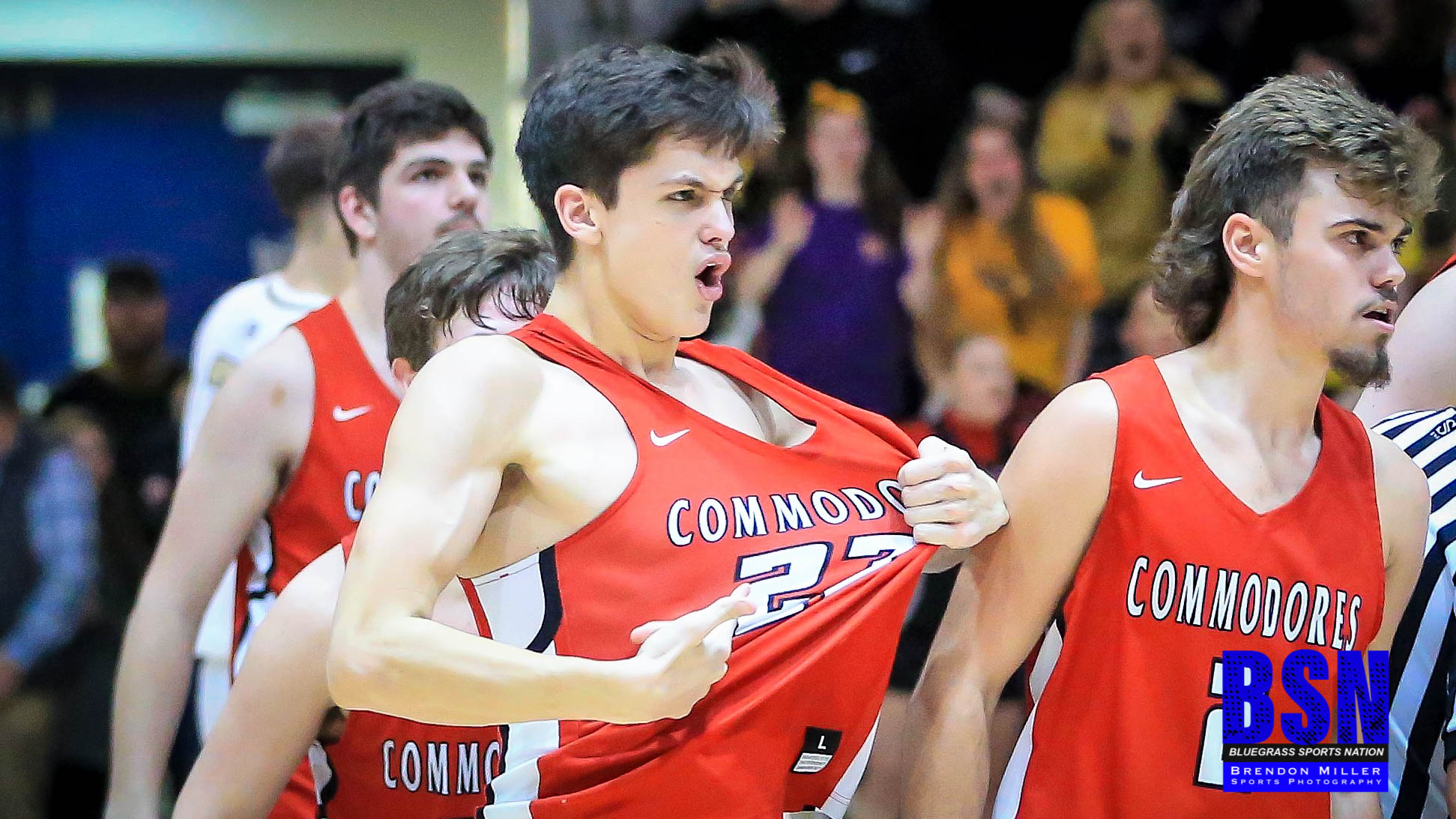 Friday Night was a magical night in Memorial Coliseum. Over its 70 years of existence, Memorial has seen the best of Mountain High School Basketball. The legacy of this grand building, and the intense Perry Central – Hazard rivalry, added another memorable story on Friday as the teams staged a heavyweight slugfest and Memorial was recognized by the Kentucky High School Basketball Hall of Fame as its First “Glory Road” site.

Hazard Head Coach Al Holland missed his second game for the Bulldogs with a medical issue and Assistant Josh Hurt again led Hazard as he had against Breathitt County on Tuesday.

Before the matchup, Hazard Principal and Mayor, Happy Mobellini had both student sections gather at mid-court for a picture before they cheered against one another. A show of unity in the community before the storm of this intense rivalry.

The game tipped and the teams got straight to business in the first quarter. Perry senior Cameron Fugate opened the game with the first give Commodore points. Dawson Duff hit his first three of the game and DeAndre Reed slashed for four points. Wade Pelfrey led the Dogs with eight on two baskets and a three pointer, and Jarrett Napier posted five early. At the end of the 1st, Hazard led 17-16.

The 2nd quarter saw Perry Central 8th grader Rydge Beverly take the spotlight. Beverly had three buckets for six to pace the ‘Dores. Lance McKenzie and Tyler Day each had four for all the Perry scoring in the frame. Reece Fletcher had five for the Bulldogs, and the teams headed to the locker rooms with Perry Central leading by a point, 30-20.

Perry Central in-bounded to begin what would be a tense and memorable 2nd half. Napier paced the Bulldogs with six and Fletcher added four. Duff took the reins for the ‘Dores with two 3’s and a basket in the Quarter for eight with Reed driving for four. Headed to the fourth, Perry was in front 44-43.

The fourth was a shot for shot and play for play duel, with an ending that will be talked about for years to come. Duff added six to total his team-high 17. Pelfrey had six with Flechter and Hall each adding big buckets to stake Hazard to a 60-57 lead with 1.0 on the clock. That is when IT happened. One of the most incredible plays/shots maybe witnessed. Everyone in Kentucky remembers the Laettner shot, but what Perry pulled off was more incredible.

Coach Shannon Hoskins dialed the play and his young men executed. Duff inbounded a long baseball pass to Tyler Day, who caught the ball on the left wing just out side the arc. Day caught, turned, and launched the ball, releasing with with .3 on the clock. Memorial erupted as the ball passed through the net. After clarification by the officials of the time and that the shot was a three pointer, overtime awaited, at 60-60.

In overtime, Hazard led 64-63 with :30 to go and Perry with the ball. Reed drove and scored on a contested shot in the lane with :11 on the clock. After a time out, Hazard was unable to get shot up and Perry Central celebrated at the buzzer.

This was simply a phenomenal High School Basketball game. The teams were never separated by more than five points during the game. Simply 14th Region Final material.