Curry’s 18 Digs Send No. 18 Kentucky Past Auburn in Sweep 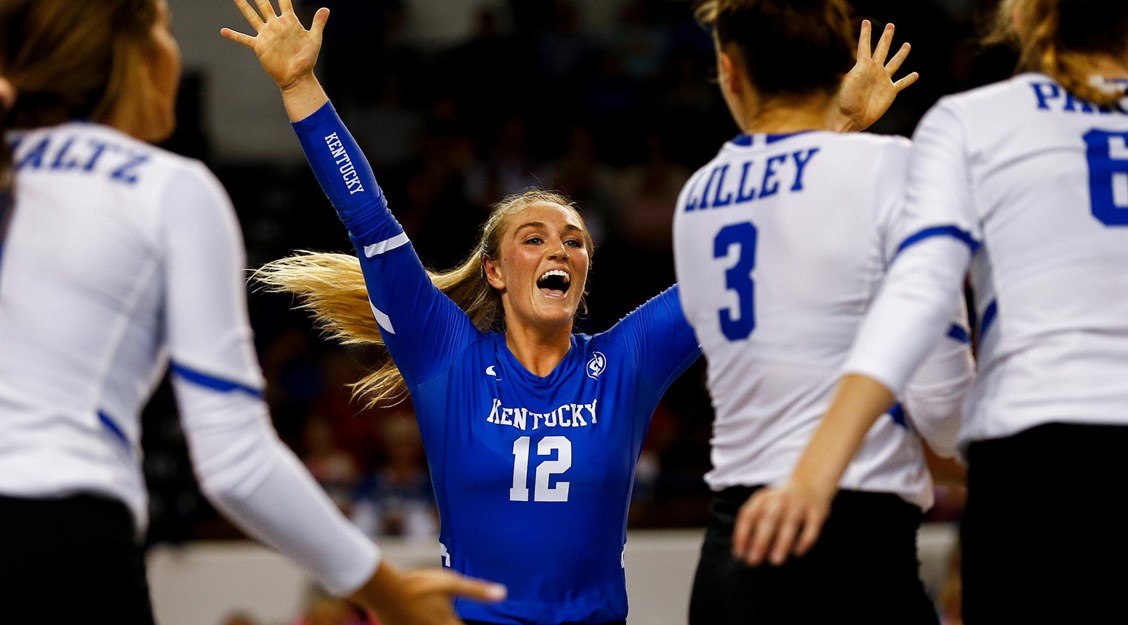 With Sunday’s win, Kentucky improves to 18-6 on the season and is now 11-2 in Southeastern Conference play, one game back of the SEC lead. Auburn falls to 0-12 in the SEC and is now 6-17 on the season.

“Auburn is a difficult team to prepare for because they have so many difference schemes,” UK head coach Craig Skinner said. “I thought our team did a really good job of solving those schemes and finishing each set. Really good floor defense by a lot of people today, and a great offensive spark by Azhani.”

Curry’s 18 digs mark the 22nd time this season the UK’s libero has 10-plus digs in a match. Curry helped hold the Auburn offense to .048 hitting in the match, with the Tigers never buoying over the .150 mark at any point in the match offensively. Four UK players had double-digit digs, with Curry leading the way with 18. Additionally, Lilley had 16, Edmond had 11 and Stumler had 10. Edmond, Stumler and Lilley all had double-doubles in the match.

UK had two players in double-digit kills with Edmond’s 13 leading the way, followed by Alli Stumler with 10. Freshman Azhani Tealer had nine kills on Sunday, just two off of her career high set vs. Ole Miss two weeks ago.

Madison Lilley continued her torrid run of late, scoring 31 assists on the day and leading the Wildcats to a .242 hitting percentage in the match.

Kentucky will continue its four-match road stretch on Friday night in Columbia, South Carolina as the Wildcats and Gamecocks will tangle at 7 p.m. ET.

Set One
Kentucky struggled out of the gates to get any offensive rhythm going, but a 3-0 run into the media timeout saw UK turn a 10-6 deficit into a 15-13 lead, its largest lead of the match to that point in the frame. UK extended the run with a service ace and a Leah Edmond kill to 5-0 and Auburn used its first timeout of the set. Azhani Tealer hammered her third kill of the match to the floor to make it a 6-0 run and make it 19-13, Wildcats, pushing Auburn into its final timeout of the set as UK’s lead was at six. The run would extend to 9-0 as Madison Lilley put down her second ace of the run and Kentucky was off and running to the finish line as Leah Meyer’s second kill of the set ended the frame with a 25-17 decision pointing UK’s way.

Set Two
The Wildcats turned a 9-7 Auburn lead into an 11-9 lead for themselves thanks to a 4-0 run at the service line by Alli Stumler, punctuated by a Leah Edmond and Madison Lilley block at the net as the Tigers took their first timeout of the set. The run extended to 7-0 on back-to-back kills from Edmond and Auburn used its final timeout trailing 14-9. The run closed at 8-0 on an attacking error by the Wildcats, but saw UK take a 15-10 lead. Auburn closed the gap to as little as three at 16-13, but UK went on a 4-0 run to take a 20-13 lead and put separation back between the sides. Tealer’s fourth kill of the match made it 22-14 off the Tiger block and Kylie Schmaltz’s serving helped the Wildcats close out a 2-0 lead, 25-15 lead, winning six of the last seven points of the set.

Set Three
Kentucky jumped out to a 3-0 lead, winning the first trio of points in the frame. Auburn rallied to make it close in the mid stages of the set with the Tigers tying things up at 7-7. Following a 4-0 run, Kentucky’s lead ballooned to six at 14-8 and the Wildcats took a 15-10 lead into the media timeout of the third set. Auburn called at timeout trailing 16-12 and UK took the lead and ran with things from there. Leah Edmond’s 12th kill of the match was a monster as it put UK in front by six at 19-13. Azhani Tealer’s thunderous sixth kill of the match made it 22-16 and the Wildcats coasted to a 25-17 win in three sets.