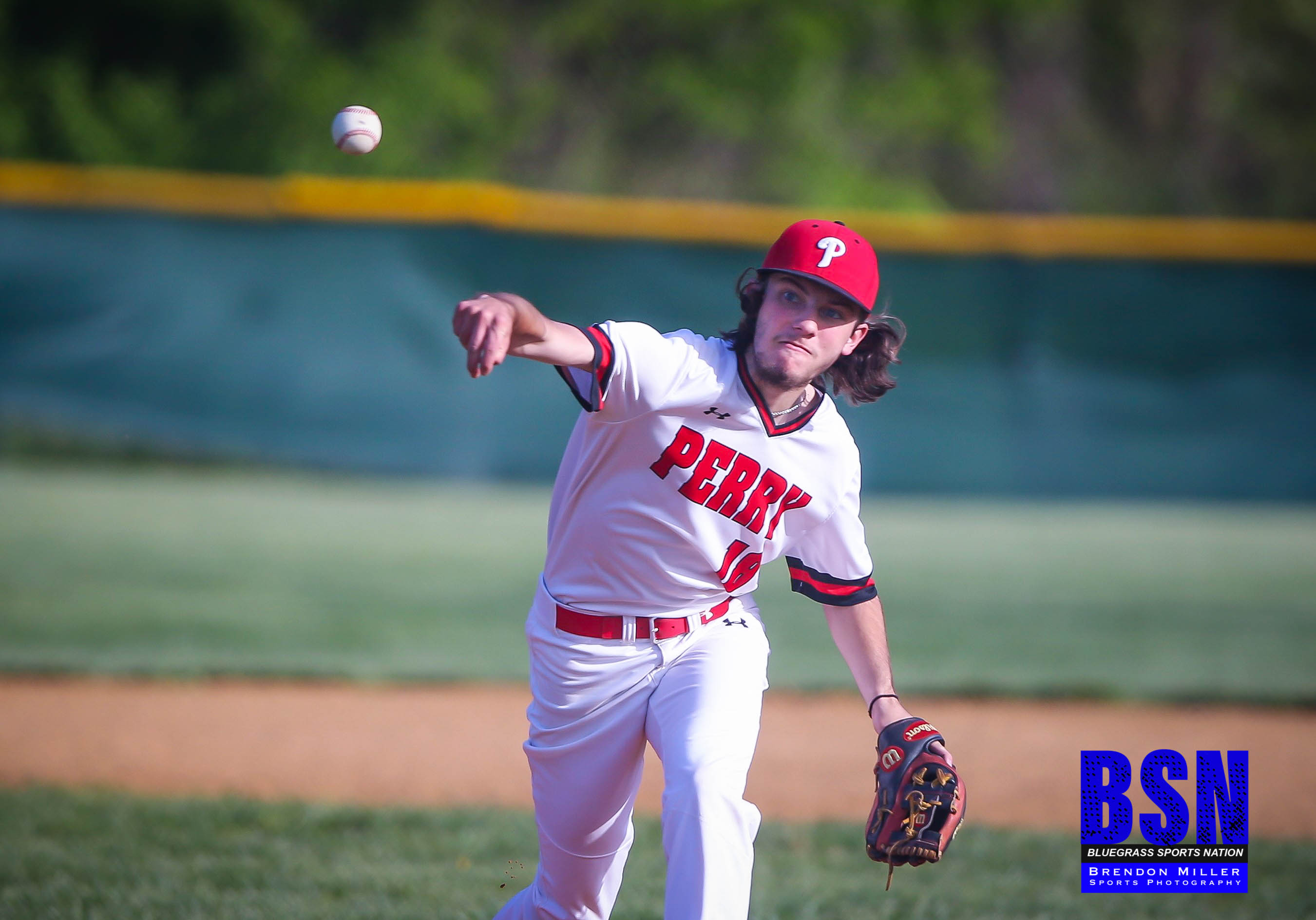 The 54th District Tournament got underway Saturday in the shadows of Buckhorn Lake Dam on the the campus of Buckhorn High School. The 54th District field was set two weeks prior when the tournament seeding was determined by a blind draw at the high school. It placed the Hazard Bulldogs against the Leslie County Eagles in the first semi final game and the Perry Central Commodores against the hosting Buckhorn Wildcats in the second semi final. Most every district in the state had decided to start the tournaments this year on the 18th in order to finish district by Monday the 20th and allow teams to prepare for regional action that will start on the 25th of May.

In the first game of the day, the Bulldogs of Hazard squared off against the Leslie County Eagles for the second time this season in an elimination atmosphere. The two played each other in April in the All A Regional Tournament. The Bulldogs moved on in that tournament, outscoring the Eagles 21-5 in 5 innings using a combination of pitchers (Garrett Miller (WP), Dalton Baker, and Bailey Blair) to hold the Eagles at bay. The stakes for Saturday’s game was quiet a bit higher as both team’s season was on the line.

The home team on the scoreboard, Leslie County, started senior Chase Adams on the bump to try and tame the Bulldog bats. The Eagles came out strong holding the Bulldogs to only a single by Trajon Campbell in the first inning. As Leslie came to the plate in the home half of the inning, they would face off against Hazard senior Andy Baker. The Eagles started fast as 8th grader Wyatt Hensley doubled, to start the inning, in the left center gap just out of the reach of center fielder Kyle Johnson’s glove. Baker then walked the the number two hitter and opposing pitcher Adams. The scoring threat was ended as Baker then struck out the next two batters and forced a ground out to first to finish the first inning tied at 0-0. Jarrett Napier would lead off the the next inning by walking and stealing second. After a Garrett Miller groundout to third that advanced Napier, Hazard 8th grader Max Johnson singled in the first run of the day to right field. Hazard did more damage in the inning as they scored 3 more runs with 2 outs. Senior Kyle Johnson scored himself and his brother Max on his first career home run. Trajon Campbell would then single, steal second, and score on a double by catcher Dalton Baker. Bailey Blair then plated courtesy runner Cameron Caudill on a triple. The top of the second saw the Bulldogs starting to impose their will and ended with 5-0 advantage to Hazard. The home half of the inning saw the lead off batter reach via error. He was then picked off by Baker. The next batter walked and Baker then recorded the 2nd and 3rd outs of the inning by way of strikeouts. In the top of the third, the Hazard bats stayed hot when Jarrett Napier singled, Garrett Miller Doubled, and both scored on an Andy Baker double in the left field corner putting the Bulldogs up 7-0. The bottom of the third was uneventful for Leslie County. The Bulldogs added 2 more in the 4th. Dalton Baker single and an error advanced him to second where he would score from in the next at bat when Andrew Ford singled. After a wild pitch moved Ford to second, he was then waved around to score on a Garrett Miller single. The bottom of the 4th and both halves of the 5th were quiet as neither team scored. In the top of the 6th Hazard added 3 more runs that would set their final tally of the day at 12. The three runs were by way of a HBP to Blair, a single by Ford, and a double by Miller. Miller was then plated by M. Johnson. In the bottom of the 6th, Hensley started the Eagles off again with a triple in the right field corner. Hensley scored on the next batter when C. Adams hit a line drive to left field. The remainder of the inning was quiet as Baker settled in and got a pop up and 2 strikeouts to finish the game. The Eagles finish the season at 6-17.

The Bulldog bats definitely made the trip across Buckhorn Mountain, as every Hazard batter recorded at least 1 hit. Hazard was led offensively by Garrett Miller who went 3-4 on the day with 3 RBIs. 4 Bulldogs recorded 2 hits as well. Trajon Campbell, Dalton Baker, Andrew Ford, and Max Johnson all had two hits a piece. The winning pitcher was Andy Baker who got the complete 6 inning game. He gave up 1 earned run on 3 hits, 3 walks, and an impressive 11 strikeout day out of 18 batters faced.

The second game of the day would watch the Buckhorn Wildcats host the Perry County Central Commodores. It would be the first meeting for the two in-county foes for the season. The Commodore were one win shy of another 20 win season, with a 19-14 record and the Wildcats were sitting at 9-17 at the time of first pitch.

This game started off much like the opening game of the day, as Buckhorn pitcher Jacob Blank coaxed 3 fly balls from the Commodores in the opening frame. The Wildcats had only one base runner in the bottom of the first as Dylan Davidson reached on an error. Commodore pitcher Dawson Kersey kept the Buckhorn batters at bay most of the evening. The second inning saw the Commodores explode for 13 runs on 8 hits. Mason MacAlarnis got the inning going with a deep double to the center field fence. He was then scored on a double by Kersey. All totaled in the inning Braden Cottongame had 1 hit and a BB, Kersey had 2 hits, Dustin Fields had a BB, Braxton Amburgey had 1 hit, Zack Gayheart had 1 hit and 1 BB, Ryan Couch had a triple, Trevor Spurlock had 1 hit and reached on an E, and MacAlarnis had a double. The Wildcats were able to finally end the inning on a couple of ground outs. Jacob Blank tried to give a spark to the Buckhorn offense as he started off the home half of the inning with a big double to center field. The Wildcats were unable to capitalize and stranded Blank in scoring position. MacAlarnis again got the 3rd inning started, this time with a single. The Commodores would go on to score 4 more runs in the inning plating MacAlarnis (1B), Kersey (BB), Amburgey (1B), and Gayheart (1B). Kersey was able to keep the Wildcats off the bases in the 3rd inning.

Kersey finished the day with the 3 inning CG, giving up only 1 hit, 4 Ks, and 1 BB. The Commodore bats were red hot collecting 14 hits on the day. The Dores had 5 guys collect multiple hits. Ryan Couch (2, 3 RBIs), 8th Grader Mason MacAlarnis (2, 1 RBI), Dawson Kersey (2, 4 RBI), Dustin Fields (2, 1 RBI), and Zack Gayheart (2, 2 RBIs). Other Commodores collecting hits on the day were Trevor Spurlock (1, 1 RBI), Dawson Duff (1, 1 RBI), Braxton Amburgey (1, 1 RBI), and Braden Cottongame (1). The Commodores will move on to play old foe the Hazard Bulldogs in the 54th District Championship on Monday May 20th at 6:00pm at Buckhorn. Both will move on to the 14th Regional Tournament.

Thanks to our sponsors for the 54th District baseball tournament 1st Trust Bank of Hazard and the Appalachian Regional Healthcare!.