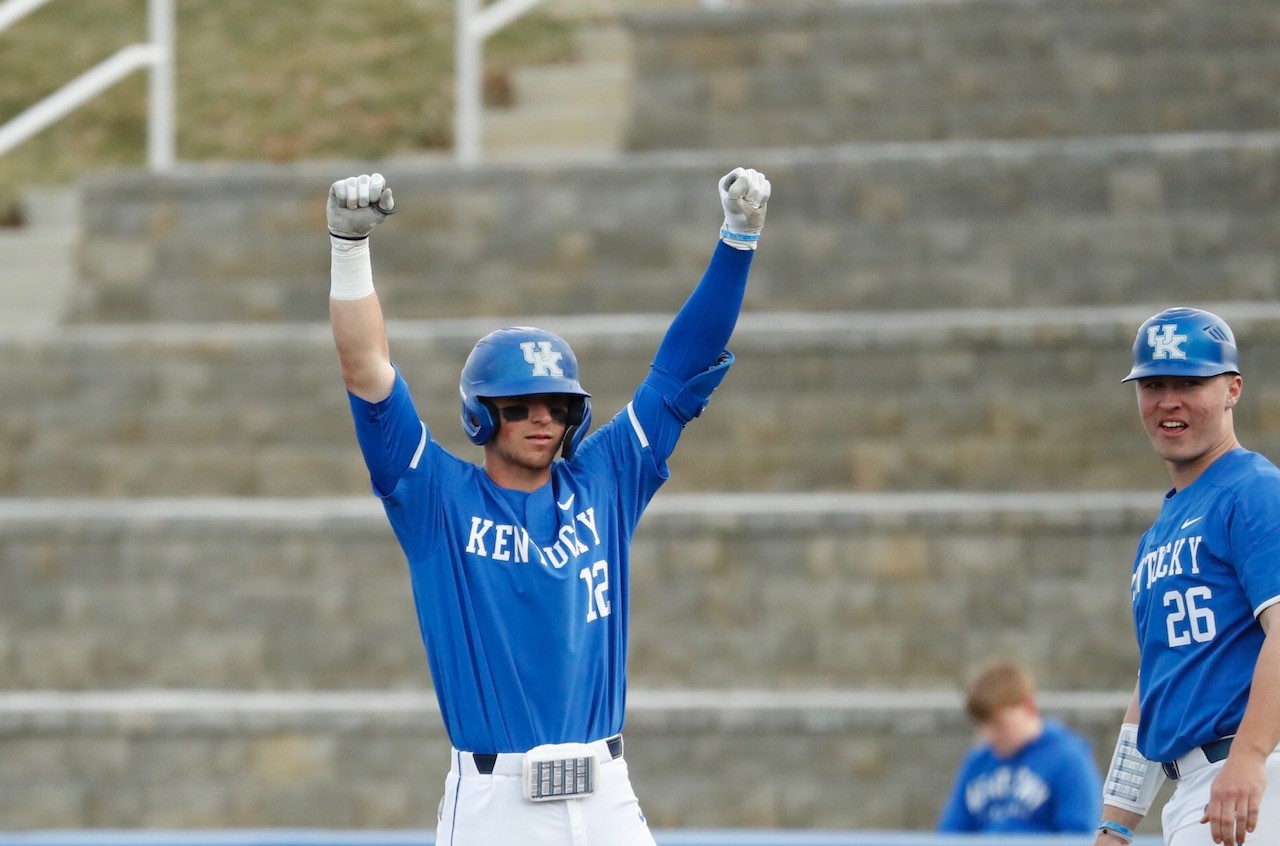 In Friday’s opener, Zack Thompson got the start for Kentucky and Doxaxis got the start for Texas A&M. Kentucky got on the board first in the bottom of the first inning, with a solo home run from Ryan Shinn to put Kentucky up 1-0. Kentucky got on the board again in the bottom of the third inning with two-run home run from Ryan Shinn again!! Texas A&M got on the board in the top of fourth inning to put the score to 3-1. The Aggies added two more runs in the top of the fifth to tie the game at 3-3. In the seventh inning, Texas A&M scored two more runs to give them a 5-3 lead. The Cats could not get the bats going to counter back and ended the game with the final score of 5-3.

Carson Coleman got the loss for Kentucky putting him at 2-3 on the season. Bryce Miller got the win for Texas A&M putting him to 3-0 on the season. Kasey Kalich was given the save for the Aggies. Kentucky left 10 runners on base, committed one error, and had nine hits. Ryan Shinn was 3-5 at the plate, hitting two home runs. M.Gei was 2-3, with two doubles.

In Saturday’s game two, Grant Macciocchi was given the start for the Cats. Asa Lacy was given the start for Texas A&M. Both teams scored one run in the first inning. Texas A&M scored a run in the second inning, two runs in the fourth inning, three runs in the fifth inning, and one run in the seventh inning to put the score to 8-1. In the bottom of the seventh inning, Curtis homered to right field to put the score to 8-2. Ryan Shinn reached on a throwing error, and the Cats got an unearned run. Unfortunately, the Cats couldn’t put any more runs on the board and the game finished with a final score of 9-3. Freshman, Braxton Cottongame, got to close out the top of the ninth inning for the Wildcats and did not allow a run.

In Sunday’s final game, Marsh was given the start for the Wildcats. Christian Roa got the start for the Aggies. In the bottom of the first inning, Ryan Shinn homered to left field to put the Cats up 1-0. Curtis singled to right field, scoring T.J. Collett, unearned to put the Cats up 2-0 after the first inning. In the top of the third inning, Blake singled up the middle, scoring Blaum. Ducoff singled through the left side, scoring Blake to tie the game up 2-2.

In the top of the fifth inning, Coleman singled tor right field scoring Shewmake to put the Aggies up 3-2. Hoehner singled through the right side, scoring Coleman and Ducoff to put the score to 5-2. Foster flied out to center field, scoring Frizzell, extending the lead to 6-2. Blaum tripled down the right field line, scoring Coleman and Hoehner putting the lead to 8-2. Kentucky ended up giving up eight runs in the fifth inning, after coming into the inning tied up. In the bottom of the fifth, the Cats battled back. Kessler double to left center, scoring Cam Hill. Gei grounded out to second base, scoring Curtis. Dalton Reed grounded out to shortstop, scoring Kessler. The Cats scored three runs in the bottom of the fifth inning, putting the score to 10-5. Texas A&M went on to score six more runs in the top of the ninth inning to make the score to 17-5, which ended up being the final score.

The Cats look to pick things back up, Tuesday against Morehead State with the first pitch at 6:30 PM at home. The Cats play a three-game series with Georgia this weekend, which is extremely crucial for this team, as they are 0-6 in SEC play right now. Everyone get out and try and help these Cats pick up some wins this week and help them on their way to try and get to Omaha.

Weekend Recap: Kentucky falls to Texas A&M all three games with the scores being 3-5, 3-9, and 17-5. The losing pitchers for Kentucky this weekend were Carson Coleman, Grant Macciochi, and Jimmy Ramsey. Kentucky left twenty-eight runners on base, committed three errors, had twenty-two hits, and scored nine runs for the weekend. Kentucky falls to 0-6 in the SEC and 14-9 overall. Kentucky threw twelve different pitchers over the week, pitching eight guys in the third game. Ryan Johnson, C. Coleman, and D. Harper got the opportunity to throw twice this weekend. Kentucky gave up thirty-one runs on the weekend.