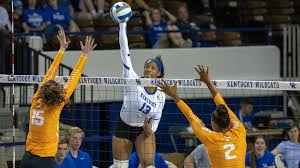 Wildcats fall to 6-4 on the season

“Purdue made plays and we didn’t, bottom line.” UK head coach Craig Skinner said. “In the fifth set, (Purdue) got kills and blocks when they needed to and served in the right spots. They created their own breaks. We need to do a better opportunity of creating our own opportunities to score points and stop the bleeding when a team gets a few points in a row.”

Kentucky falls to 6-4 on the season. The annual “Battle of the Bluegrass” will take center stage on Friday night inside of Memorial Coliseum, as Kentucky hosts in-state rival No. 23 Louisville at 8 p.m. ET. The match will be seen live on the SEC Network, ESPN3 and the ESPN app.

Purdue found itself trailing 21-20 in the fourth set, and called a timeout. The Boilermakers then won five of the final six points of the fourth set to force the match into a fifth set. The five-set match for Kentucky was its second-straight five-set affair, following a full-distance loss to Indiana on Saturday afternoon.

In the fifth set, Purdue took charge winning the first eight points and forcing UK to burn both of its timeouts early in the frame. Kentucky closed the gap late in the fifth with a charge to pull within 13-8, but Purdue close out the match and its fifth win of the season. UK is now 0-2 in five-set matches this season.