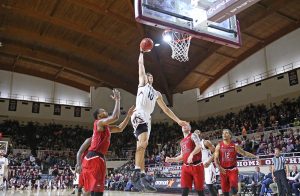 In all, EKU’s schedule features 11 teams that played in national postseason tournament last year. Nine of the Colonels’ opponents won 20 or more games a year ago. 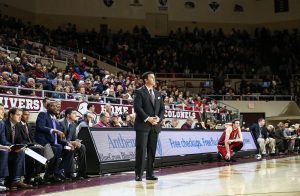 “It’s a challenging schedule from the start,” McHale said. “Anytime you open the season against a C-USA school like Rice and an SEC school like Ole Miss, you’re going to be tested. But we’re excited because we want to play the best.”

Following an exhibition against Georgetown College at home on Friday, November 3, EKU opens the regular season at Rice on Friday, November 10 in Houston. It marks the first time EKU has opened the season away from McBrayer Arena since 2013-14. The Owls went 23-12 last season and reached the quarterfinals of the College Basketball Invitational (CBI).

The Colonels then travel to Oxford, Mississippi to take on Ole Miss on Monday, November 13. The Rebels went 22-14 in 2016-17 and advanced all the way to the quarterfinals of the National Invitation Tournament (NIT).

Both of EKU’s first two games are part of the 2017 MGM Resorts Main Event.

The Colonels host Kentucky State in their home opener on Thursday, November 16.

Following that game, they head back out west to play in the Las Vegas portion of the MGM Resorts Main Event. EKU plays Prairie View A&M in the tournament opener on November 20 and will play either Eastern Washington or Georgia State on November 22, depending on results. EWU went 22-12 last year and played in the CBI, while Georgia State finished 20-13 to earn a spot in the CollegeInsider.com Tournament (CIT).

Both Las Vegas games will be played right on the strip at T-Mobile Arena.

“I want to make it fun for these guys, and getting to fly out to Las Vegas and play at T-Mobile Arena is an experience they’ll never forget,” McHale said.

Following a home matchup against Asbury on November 25, EKU heads south to Bowling Green on November 29 to square off against WKU at Diddle Arena. It will mark the 158th time EKU and WKU have met in basketball’s version of the Battle of the Bluegrass. The Colonels defeated the Hilltoppers, 78-59, last year in Richmond behind 19 points from then-freshman Asante Gist.

EKU follows that up with three straight road games, starting with Oregon State on December 5 in Corvallis. It will mark the first-ever matchup between the two programs.

The Colonels open up a new series with NKU on December 10 in Highland Heights. NKU won the Horizon League Tournament and played Kentucky in the NCAA Tournament last season. It will be only the seventh meeting (and first since 1992) between the two in-state programs.

“Being able to play Western Kentucky, Marshall and now a new series with Northern Kentucky … those are special because they are all three great natural rivalries,” McHale said.

“I want these guys to be battle tested, but I have to be careful because we are logging thousands of miles of travel during the first few weeks of the season,” McHale added. “It’s all meant to get us prepared for the rigors of OVC play.”

EKU’s OVC schedule will look somewhat different this season with the elimination of conference divisions.

The Colonels close out the regular season at Morehead State on February 24.

For the first time ever, the OVC Tournament will be held at the Ford Center in Evansville, Indiana this year. The tournament will run from February 28 – March 3.