EKU’S DUJUANTA WEAVER OUT FOR THE YEAR WITH TORN ACL 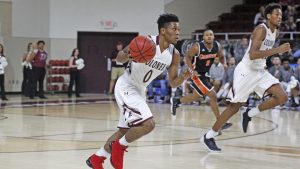 Tay Weaver out for season – Photo by EKU

It is the same ACL Weaver tore during his prep days at Doss High School in Louisville.

He missed all of last season with a torn right ACL. 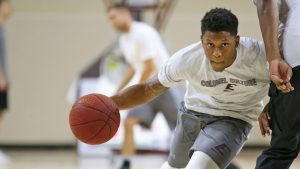 “We are devastated to learn that Tay Weaver will miss yet another season with a torn ACL,” head coach Dan McHale said. “To say that Tay is the heart, soul and fabric of this team is an understatement. We are heartbroken, because we know that if anyone deserves to be back on that court playing, it’s Tay. He had worked so hard to come back from last year’s injury. Unfortunately, he suffered a non-contact injury on Friday that will end his season.”

Weaver has not played in a regular season game since January of 2016, when he suffered a shoulder injury that ended his freshman campaign. McHale has often praised Weaver’s defensive prowess, and he recently said of the 5-10 guard: “When Tay’s out there, everyone else elevates their defensive intensity because they see how hard he works. He’s definitely the head of the snake when it comes to our defense.”

“Tay will still have a valuable role on the team,” McHale continued. “He’ll always have a smile on his face, he’ll lead by example and his impact on this team will be felt even more. As difficult as this is for Tay and his family, I’m confident there is a silver lining in the end.”

EKU opens the season on Friday night at Rice. Tip is scheduled for 8:00 p.m. ET.