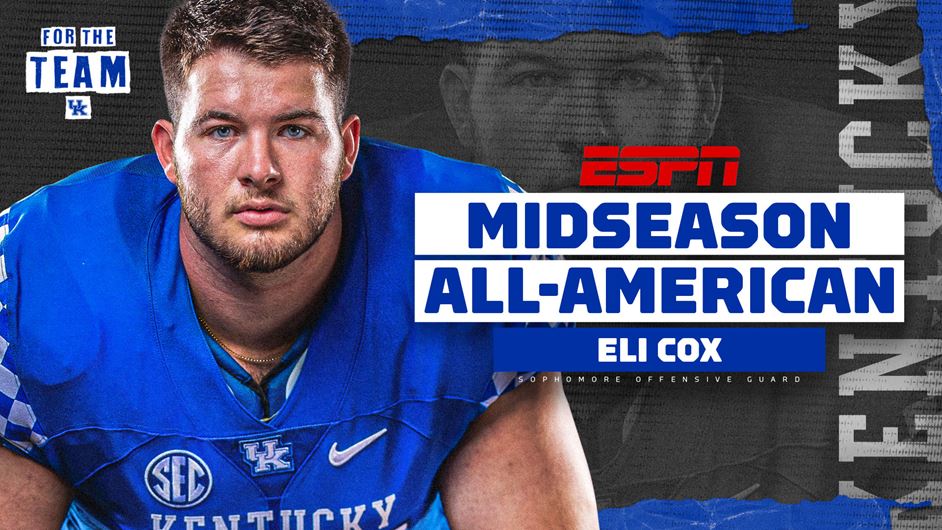 Sophomore right guard has graded at 80.8 percent in six games

Cox, a 6-foot-4, 301-pound sophomore from Nicholasville, Kentucky, is in his first season as the starting right guard on UK’s offensive line affectionately known as the “Big Blue Wall.” The o-line unit has help paved the way for the Southeastern Conference’s leading rusher, Chris Rodriguez Jr. Thanks to its punishing ground game, Kentucky is 6-0 for the first time since 1950 and just the second time in the past 111 years. The Wildcats are also bowl-eligible for a school record sixth-straight season.

Described as the strongest pound-for-pound player on the team, Cox has graded at 80.8 percent with 15 knockdown blocks this season. He also recovered a fumble in the end zone, which was the winning touchdown against Missouri.

In last week’s 42-21 win over LSU, he graded at 91 percent, led the team with seven knockdown blocks and had 15 blocks at the point of attack while not missing an assignment or yielding any pressures. He was named the SEC co-Offensive Line Player of the Week for his efforts as he also helped the Cats pile up 330 rushing yards and average 7.7 yards per rush (excluding two kneel downs at the end of the game) against the Tigers.

No. 11 Kentucky hits the road this weekend to take on top-ranked Georgia at Sanford Stadium. Kickoff is set for 3:30 p.m. EDT on CBS Sports and the UK Sports Radio Network.