Elliott will Chase the Championship 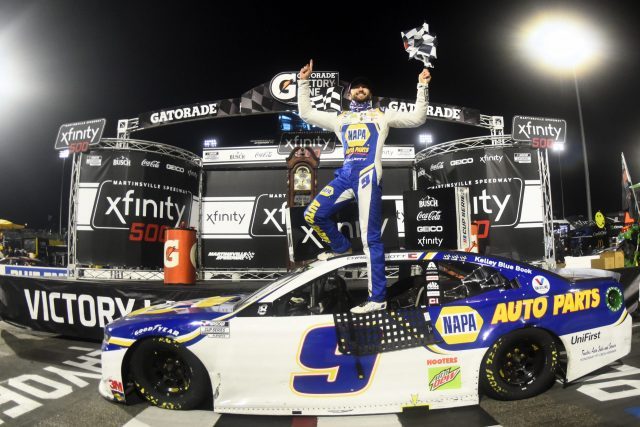 Chase Elliott displayed his career best performance at Martinsville Speedway on Sunday, leading 236 of 500 Laps to clinch the victory and opportunity to advance to the Championship 4 Tournament at Phoenix.

The NASCAR Cup Series Road to the Championship 4 finished Sunday afternoon at Martinsville Speedway in the Xfinity 500.  Only four of the remaining eight contenders will advance past the weekend with a shot at the Cup Series title in Phoenix Raceway. A victory at the Paperclip by any playoff driver would clinch a spot in the Championship 4, regardless of points.

Brad Keselowski was awarded Pole position and paced the field in the opening laps only to turn the reins over to Marin Truex Jr. on Lap 4.   Denny Hamlin will follow in second behind his JGR teammate.

On Lap 89 Chase Elliott secured the lead for the first time as he muscled inside of leader Martin Truex Jr. on the front stretch for position.

Garrett Smithley’s spin out in Turn 4 brought out another caution flag on Lap 105.  Many lead Lap cars decide to pit for service, whereas, Chase Elliott remained on track for track position.

Joey Gase on track incident in Turn 4 brought yet another closing Stage caution on Lap 116. The shootout returned to green on Lap 121 with Denny Hamlin surging to the front followed by Chase Elliott.

Alex Bowman would easily maneuvered around Elliott for the second spot on Lap 123.

Running door to door for two laps with his older brother, Kurt Busch cleared Kyle Busch for the honors on Lap 143.

On Lap 181, Kevin Harvick was forced to pit under green due to a tire issue. When Kevin Harvick returned to the track he was running a disappointing 32nd and two laps down.

Ryan Preece accident on Lap 216 brought out the caution.   As many lead lap car pit for service, including Chase Elliott who relinquished the lead to Denny Hamlin. By Lap 240 Chase Elliott rebounds and passes Denny Hamlin on the inside lane to recover the lead.

With 10 laps to go in the stage, Chase Elliott’s lead over Denny Hamlin had expanded to 2.4 seconds with Martin Truex Jr. in third.

After Timmy Hill smacked the safety barrier wall on Lap 352, caution flew over the track. On the restart on Lap 359, Joey Logano was followed by Martin Truex Jr., Ryan Blaney and Chase Elliott.

On the restart on Lap 409, Martin Truex Jr. made contact with Joey Logano and drove to the front.

With 27 laps to go, Martin Truex Jr. began falling back due to loose lug on a previous pit service.  Martin Truex Jr. ended up having to pit on Lap 476 as chances to advance in playoffs diminished.

With less than 10 to go, Chase Elliott protected a more than 5-second lead over Ryan Blaney as Joey Logano claimed third.  Chase advances to the Championship 4.