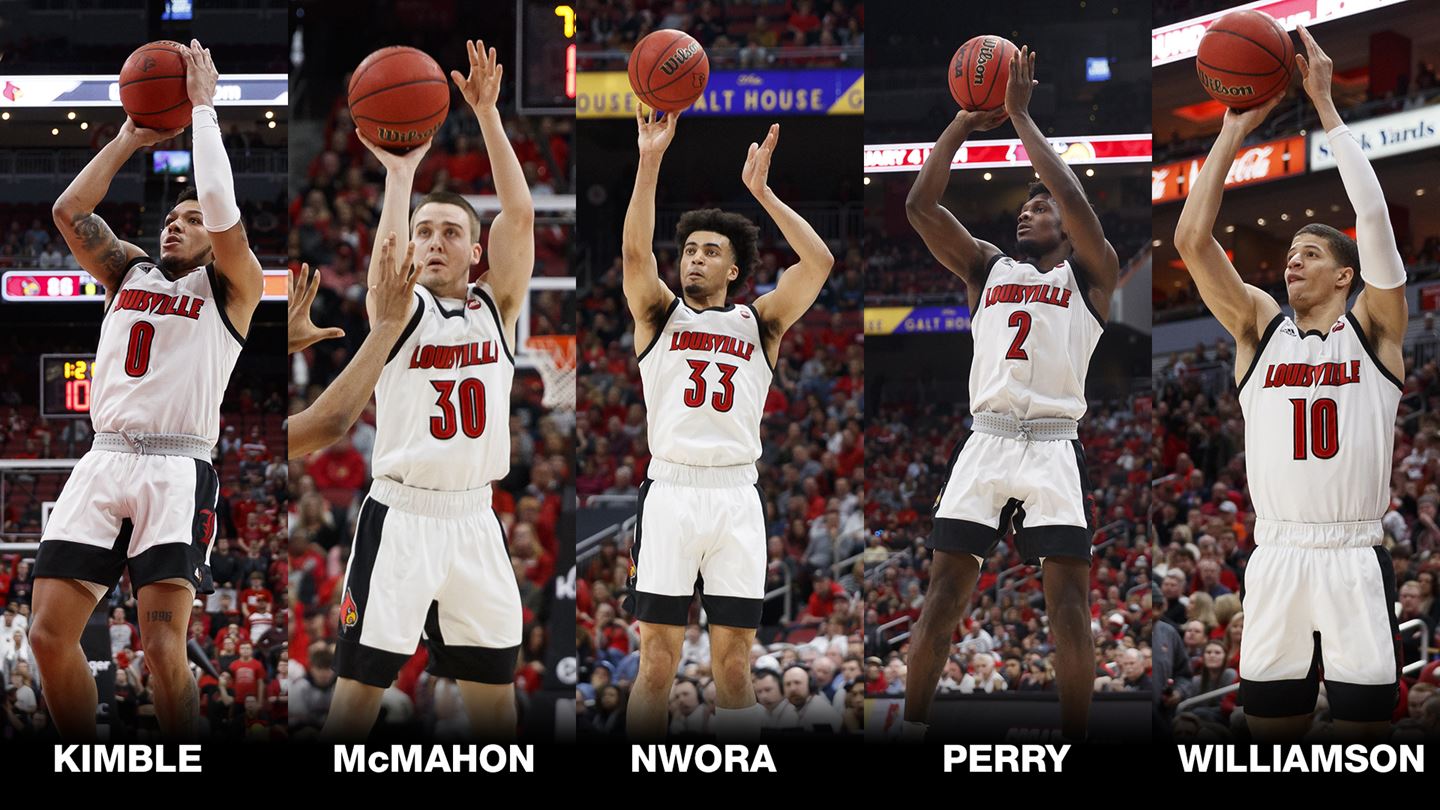 Louisville’s Lamarr “Fresh” Kimble, Ryan McMahon, Jordan Nwora, Darius Perry and Samuell Williamson are among 31 ACC men’s basketball student-athletes recognized for their academic achievement as well as their on-court performance.  Nwora and Perry earned the recognition for the third straight year, while McMahon is receiving his second academic accolades.

Louisville’s five selections among the 31 honorees matched Pittsburgh as the most from an ACC institution.  Clemson had three selections, while seven schools had two each including Florida State, Miami, NC State, Notre Dame, Syracuse, Virginia Tech and Wake Forest.  UofL has placed an ACC-best 36 selections on the team in the last six years, including six last year, five in 2017-18, six in 2016-17 and seven in its first two ACC seasons.

To be eligible for consideration, a student-athlete must have earned a 3.0 grade point average for the previous semester and maintained a 3.0 cumulative average during his academic career.  Athletic achievements during the most recent season are also considered in selecting the All-ACC Academic Team.

Florida State senior Trent Forrest was chosen as the recipient of the ACC’s Skip Prosser Award, presented annually to the top scholar-athlete in ACC men’s basketball.

Kimble, who is working on a master’s degree in criminal justice, has handed out four or more assists in nine games this season, and has three or more assists in eight of the last 18 games.  Kimble started 16 games this season, with UofL posting a 12-4 record in those games.  The 6-0 graduate transfer guard from Philadelphia, Pa., has scored six or more points in 12 games this season.  He He was a three-time captain and two-year starter at Saint Joseph’s University before joining UofL for his final collegiate season.

Nwora is on target to earn his bachelor’s degree in exercise science this summer in just over three years.  The preseason ACC Player of the Year, national player of the year candidate and one of five finalists for the Julius Erving Award as the nation’s top small forward, Nwora was named last week to the 2020 CoSIDA District 2 Academic All-District basketball team.  The 6-8 junior forward from Buffalo, N.Y., is the only player to rank among the ACC’s top ten in scoring (18.0 ppg, second in the ACC), rebounding (7.4, 8th), free throw percentage (.810, 4th), field goal percentage (.443, 8th) and three-pointers made per game (2.4, 3rd).

Williamson, a business major, has scored in 25 of 30 games as a top reserve at forward for the Cardinals.  The 6-7 freshman forward from Rockwall, Texas, has scored five or more points in 13 games this season, including seven of the last 13.  He is one of just 14 players in Louisville history to score as many as 13 points in a freshman career debut, tying for 12th on that list with 13 off the bench at Miami in the season opener.

Louisville has received an NCAA Public Recognition Award six of the last seven years for ranking among the top 10 percent in men’s basketball in the Academic Progress Rate (APR), which measures academic eligibility, retention and graduation for student-athletes. Louisville is one of just nine Division I schools in the nation, including only two from Power Five conferences (Louisville and Stanford), which have earned the APR recognition in at least six of the last seven years.  UofL is one of only nine Division I schools in the nation to have perfect men’s basketball multi-year APR scores in at least four of the past six years.