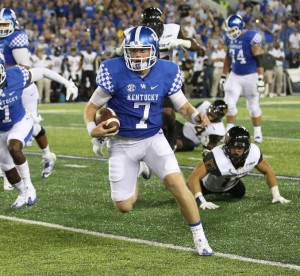 The University of Kentucky Wildcats opened up the 2016 college football season in Commonwealth Stadium with a very disappointing loss to the University of Southern Miss Golden Eagles.

The first quarter got off to a rough start for Kentucky.  The Cats came out on offense, barely mustering 4 yards on their first series capped off by a blocked punt by Southern Miss.  The Golden Eagles offense capitalized on receiving the ball with a short field and turned the opportunity into the game’s first score putting Southern Miss. up 7-0.  The Cats evened the score on their third series with Drew Barker hitting Jeff Badet on a quick screen and Badet took the pass 72 yards for the score, tying the game tied at 7-7 with just over 6 minutes left in the 1st quarter.  The Golden Eagles took over after the kick-off, but went 3 and out.  The Cats took over and two plays later Drew Barker hit Garrett Johnson for 43 yards and a score, putting the Cats in the lead 14-7.  After a J.D. Harmon interception, Kentucky took over on their next drive on their own 35.  Several plays later, Drew Barker hit Kayaune Ross in the back of the end zone for a 9 yard touchdown pass, putting the Cats up 21-7 at the end of the 1st quarter.

The 2nd quarter got off to a lackluster start with both teams trading the ball back and forth for the first several drives.  The Cats did however continue their assault on the Golden Eagle QB, Nick Mullens.  After Blake McClain intercepted Mullens for the Cats 2nd pick in the quarter, the Cats took over on the Southern Miss. 49 with 7:24 left in the quarter.  Two plays later, Drew Barker found Garrett Johnson wide open downfield for a 53 yard pass and score, putting the Cats up 28-7.  On the Golden Eagles next drive they drove the ball downfield for 64 yards resulting in a field goal.  Cats 28, Golden Eagles 10.  The Cats immediately took over on their own 36 following the Southern Miss kick off and marched 64 yards downfield ending in a 7 yard run by JoJo Kemp for a touchdown with :56 left in the first half, giving the Cats their larges lead 35-10.  Southern Miss. would not go quietly into halftime.  Nick Mullens hit Isaiah Jones for a 71 yard touchdown pass, making the half time score, Cats 35 Golden Eagles 17.

Southern Miss came. out on offense to start the 2nd half.  After returning the kick to their own 16, the Golden Eagles marched 84 yards downfield, aided by a pair of Kentucky penalties.  Nick Mullens went in for the score on a 1 yard QB sneak, making it Cats 35, Golden Eagles 24. Southern Miss. then recovered the football following a costly fumble by QB Drew Barker.  The Golden Eagles took over on their own 34 yard line and went 8 plays for 66 yards and a touchdown.  Nick Mullens found Julian Allen all alone in the end zone for an 18 yard touchdown pass, trimming the Cats lead to 35-31.  After Kentucky failed to muster anything offensively on their next drive, Southern Miss. took over again on their own 43.  This time the Golden Eagles drove 57 yards on 10 plays for the score.  Once again QB Nick Mullens dove over the middle for a 1 yard score.  Score at the end of the third – Cats 35, Golden Eagles 38.

Kentucky was led statistically on offense by Drew Barker’s passing (15-23, 323 yards, 4 touchdowns); Garrett Johnson (6 catches for 43 yards and 2 touchdowns) and Boom Williams (9 rushes for 93 yards) also had great statistics.  On defense, Jordan Jones (19 tackles, 1 sack) and J.D. Harmon (2 interceptions) led the way.
Kentucky hopes to turn things around next week when the Cats travel to Gainesvile, FL to take on the University of Florida Gators in the legendary Swamp. Kentucky has not beaten Florida in 30 years.