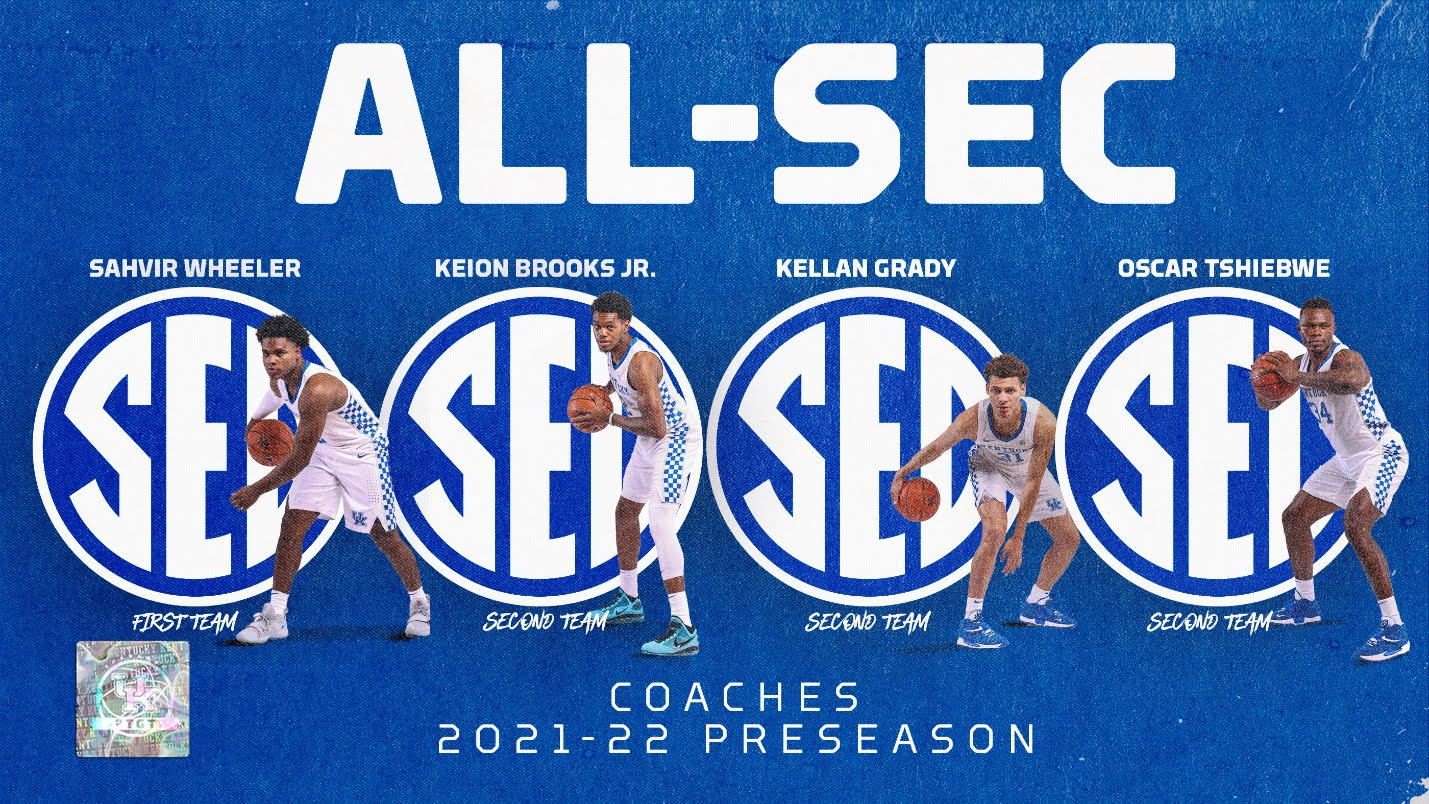 Wheeler voted for first-team honors; Brooks, Grady and Tschiebwe on the second team

In addition to Kentucky’s three picks, Davonte Davis from Alabama, Jabari Smith from Auburn, Xavier Pinson from LSU, Garrison Brooks from Mississippi State and Keyshawn Bryant from South Carolina made the second team.

Unlike the media preseason selections, no vote for SEC Player of the Year or predicted order of finish was conducted.

Wheeler was an All-SEC Second Team selection by both the league’s coaches and the media as a sophomore at Georgia. He paced the conference in assists per game with 7.4, but he also led the Bulldogs in scoring with 14.0 per game and steals at 1.7 per outing. His 22 games scoring in double figures was also a squad best.

Wheeler was fifth in the country in assists per game and his total assists ranked third.

The Houston native broke Georgia’s single-season assists record with 193 dimes and needed just 24 games to break the record. He was also the league’s best in assist-to-turnover ratio at 1.7 to become the fourth player since 2000 to lead the conference in both assists per game and assist-to-turnover ratio. Wheeler recorded eight double-doubles of the point-assist variety during his standout sophomore campaign and also registered the first triple-double in program history with 14 points, 13 assists and 11 rebounds against LSU on Feb. 23.

Brooks is one of UK’s leading returning scorers and is the top returning rebounder from the 2020-21 season. He averaged a career-high 10.3 points per game and had the highest rebounding average of 6.8 per game on the team despite missing the first nine games of the season with an injury. Brooks reached double-figure scoring in 11 of his 16 appearances and posted his first two career double-doubles.

Brooks has played in 47 games with nine starts over his first two seasons with Kentucky. He is averaging 6.4 points per game and 4.4 rebounds for his career. On 16 occasions Brooks has reached double-figure scoring throughout his career.

Grady was a prolific scorer at Davidson who scored 2,002 career points on 47.2% career shooting. With 240 career 3-pointers, Grady has made at least 51 treys in all four seasons and shot a career-best 38.2% from behind the arc in 2020-21. He has 21 games with at least four 3-pointers. Grady reached the 2,000-point milestone in Davidson’s final game of 2020-21 and was the sixth player in program history to achieve the mark.

The Boston native has been one of the Atlantic 10’s best players from the very start of his college career. Grady is a four-time All-A-10 selection, including a two-time first-team pick. He won A-10 Player of the Week five times in his Davidson career in addition to five A-10 Rookie of the Week honors in his breakthrough 2017-18 campaign. Grady was named in A-10 Rookie of the Year that season.

Tshiebwe was off to another solid start this season, averaging 8.5 points on 52.3% shooting in addition to 7.8 rebounds prior to his midseason transfer to Kentucky. Tshiebwe spent the 2021 spring semester with the Wildcats. He practiced with the team but was not eligible to appear in any games.

Kentucky’s first exhibition game is Friday at 7 p.m. in Rupp Arena vs. Kentucky Wesleyan. SEC Network will carry the game. UK will follow with an exhibition game vs. Miles College on Nov. 5 at 7 p.m. on SEC Network. The Wildcats open the regular season in New York for the Champions Classic. They will face No. 9 Duke on ESPN.