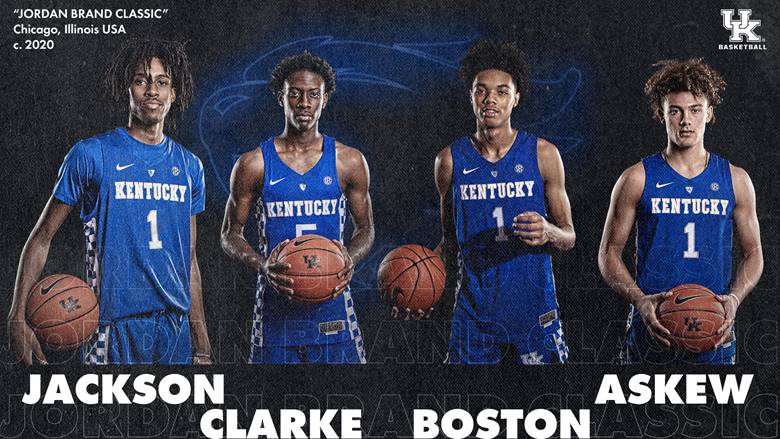 UK has had multiple players compete in every Jordan Brand Classic during the John Calipari era, including six in 2013. Since Calipari’s arrival, 44 total players have been selected for the Jordan Brand Classic. That mark is easily the best in the country. The four players selected this season is the second most of any college program.

Kentucky can only publicize recruits who have signed letters of intent with the University of Kentucky.

All told, 49 Wildcats have been selected for the game. A full list of JBC alumni can be found at jordanbrandclassic.com/history/.

The 19th edition of the game is set for March 27 at the Wintrust Arena in Chicago. Tipoff is set for 9 p.m. ET.

Tickets will be available at Ticketmaster.com and the Wintrust Box Office on Feb. 17 at noon ET.

Kentucky will be well-represented on the high school all-star circuit. Boston and Clarke will play in the 2020 McDonald’s All American Game on April 1 in Houston, and Boston, Clarke and Lance Ware were selected for the 2020 Iverson Roundball Classic, which will take place April 24 in Philadelphia. Boston and Clarke are also among 10 semifinalists for the 2020 Naismith Trophy High School Boys Player of the Year award.

UK’s current signing haul, which also includes Cam’Ron Fletcher, is going to be in the mix for one of the top classes in the nation yet again. ESPN, Rivals and 247Sports currently rank UK’s class No. 1.

At 6-foot-3, 195 pounds, Askew has the frame to make an immediate impact, plus he’s shown the ability to flourish alongside other high-level players at Mater Dei High School, where he averaged 14.0 points, 6.8 assists and 3.5 rebounds last season while leading his team as a sophomore to the California Interscholastic Federation Open Division Southern California Regional championship.

“Devin is a winner who other players want to play with,” Calipari said at the time of his signing. “He has a team-first mentality and a maturity about him that you won’t find from many kids his age. He can make shots, he creates plays for himself and his teammates, and he is a willing defender with great size and length. Devin embraces the challenge of playing on this stage and has the makeup to be a special player.”

A 2018-19 MaxPreps Boys Basketball Sophomore All-American Third Team selection, Askew led his team to the Peach Jam finals last summer and averaged 11.6 points, 5.1 assists and 4.8 rebounds per game while shooting 41.4% from 3 in the Nike EYBL circuit. The five-star prospect is tabbed the No. 25 overall player in the 2020 class by ESPN and was the consensus No. 1 point guard in the 2021 class prior to reclassifying.

At 6-7, 185 pounds, Boston is a consensus five-star prospect who is playing at Sierra Canyon High School (Chatsworth, California) for his senior season. Last summer, playing alongside and against some of the best players in the country, Boston averaged 22.8 points, 8.1 rebounds, 3.2 assists and 1.9 steals per game in the Nike EYBL circuit.

Boston is considered one of the top shooting guards in the class and is ranked as high as No. 4 overall by Rivals. He earned 2018-19 MaxPreps Boys Basketball Junior All-American Team Honorable Mention distinction after averaging 18.4 points, 5.4 rebounds 1.9 steals while leading his previous high school in Norcross, Georgia, to the state semifinals last season. He was a 2019-20 All-USA Preseason High School Boys Basketball Team selection and is a 2020 Naismith Trophy semifinalist.

Clarke is currently the top-ranked signee of this UK signing class. 247Sports considers him the No. 4 overall player in the class and Rivals tabs him at No. 5. He’s a consensus top-10 player in the class. USA Today named him to its All-USA Preseason High School Boys Basketball Team, and like Boston, he’s also a 2020 Naismith Trophy semifinalist.

At 6-9, 200 pounds, he will be an important piece for the future of UK’s front court. At his best, he combines an explosive skillset with length, athleticism and a lot of bounce. With an elite wingspan, he could be an ideal rim protector for the Wildcats. During the Nike EYBL circuit this past summer, he averaged 10.9 points, 6.0 rebounds and 2.3 blocks per game.

“Isaiah is without a doubt one of the best defenders in this class,” Calipari said. “You’re talking about an elite shot blocker who can guard one through five. Isaiah is acquiring the offensive skills needed to be an exceptional two-way player and I really like his ability to attack the rim in a lot of different ways. Isaiah is a high-character kid and a winner.”

Jackson is expected to continue to grow into his frame and why his best basketball is still ahead of him. He’s ranked as high as No. 27 in Rivals’ class of 2020 rankings. The five-star prospect is a consensus top-four power forward in the class.

The current Wildcats return to action on Tuesday when they travel to LSU. Tip is set for 9 p.m. ET on ESPN.