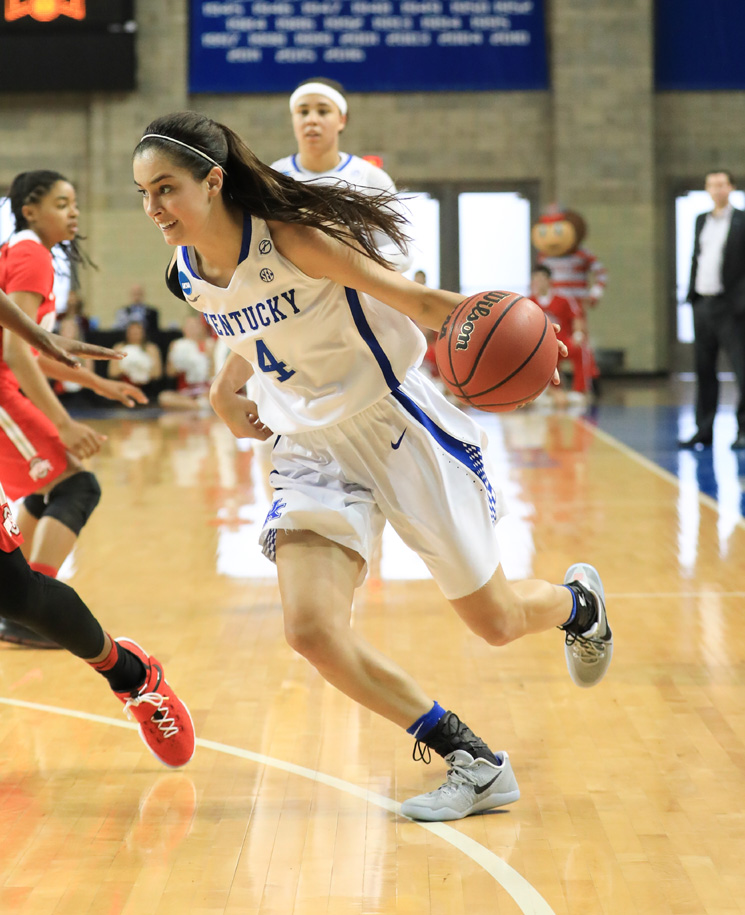 LEXINGTON, Ky. – Fourth-seeded Kentucky rallied from a 19-point second half deficit to within one point of the lead, but the Wildcats could not overcome fifth-seeded Ohio State’s advantage, as the Buckeyes won 82-68 on Sunday afternoon at Memorial Coliseum.

It was a 33-15 run over 13 minutes that allowed Kentucky to methodically cut into the Ohio State lead. But Ohio State ended the game on a 17-4 run to put it away.

Kentucky (22-11) was led by its seniors, as both Makayla Epps and Evelyn Akhator, who had big games as they played their final game at home. Epps scored 21 points and had four assists, while Akhator had 14 points and a career-high 23 rebounds. Only twice in the history of Kentucky women’s basketball has a player had more than 23 rebounds (Valerie Still had games of 27 and 26 rebounds).

Kentucky won the rebounding battle 50-43, but the Wildcats had twice as many turnovers as Ohio State (12-6). The Buckeyes had 22 points off of their bench, while Kentucky managed just eight.

Ohio State grabbed an early 7-2 lead, and eventually led 12-6. Kelsey Mitchell had 10 of the Buckeyes’ first 12 points, while Akhator scored the first six for Kentucky. Ohio State would increase its lead to 16-8, forcing Kentucky to take a timeout. The Wildcats responded, scoring the next six points to cut the deficit to just two, 16-14. Ohio State responded by scoring the next four, and the Buckeyes led after the first quarter 20-16. Kentucky struggled from the floor, hitting just six-of-17, including missing all five attempts from behind the arc.

In the second quarter, Ohio State started quickly once again, this time with a 14-2 run to take a 34-18 advantage. The lead grew to as many as 17, and the Buckeyes would have a 46-31 lead at the half. Epps had nine points to lead Kentucky in the first half, while Akhator had 13 rebounds at the break.

Ohio State increased the lead to 19 at 50-31 before Epps went on a personal 6-0 run to make it 50-37, forcing the Buckeyes to call timeout. The Wildcats continued to cut into the Ohio State lead, getting within seven, 59-52. Kentucky would trail 61-53 after three quarters, despite Akhator’s 12 points and 20 rebounds in the game’s first 30 minutes.

Kentucky came out firing in the fourth quarter, with Epps scoring on a drive to the basket and Morris nailing a three from the top of the key to cut the lead to 61-58 with 8:55 remaining. The Wildcats would get within one, 65-64, on an Epps jumper with 6:04 left in the game. But Ohio State answered with an 8-0 run to build the lead back to nine.