Fox has best game of collegiate career: Kentucky defeats UCLA advances to the Regional Final to take on North Carolina. 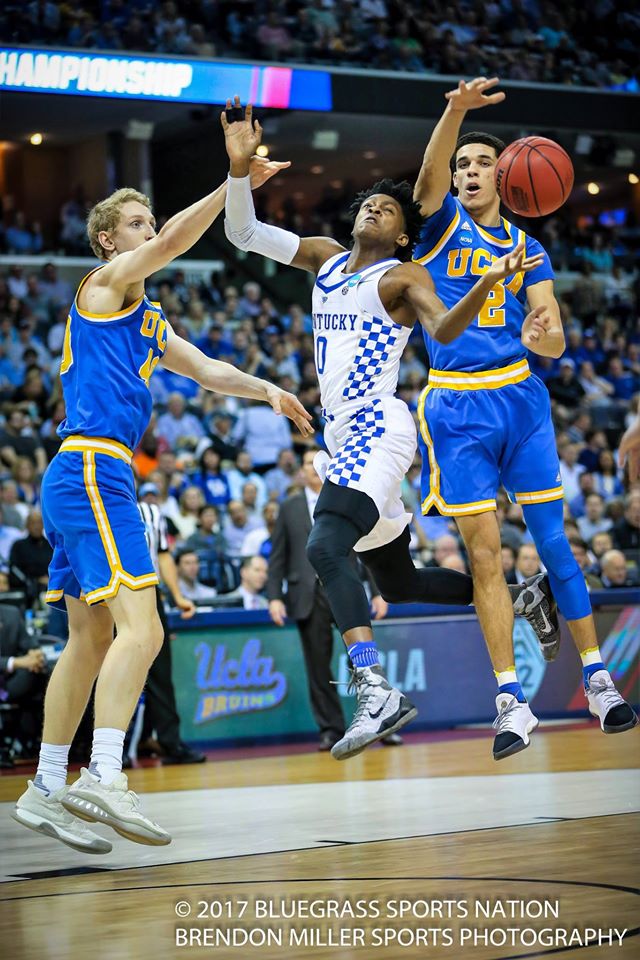 Fox has best game of collegiate career:  Kentucky defeats UCLA advances to the Regional Final to take on North Carolina.

Memphis, TN, The Sweet 16 of the NCAA tournament is one of the most exciting weekends in sports.  Memphis, Tennessee is the host city of the South Region.  The Region is the only region in the Tournament that features the top 4 seeds, playing.  The South Region features 3 Blue bloods in College Basketball history.  The # 1 Seed North Carolina Tar Heels, The # 2 Seed Kentucky Wildcats, the # 3 Seed the UCLA Bruins, and the #4 Seed Butler Bulldogs.

The South Region is also Kentucky’s Coach John Calipari first time  playing in the city since he left the Memphis Tigers in 2008 to join the Kentucky Wildcats. The game had a lot at stake and the National Attention this game gathered has been incredible.  De’Arron Fox had the game of his career, scores 39 points as the Cats Advance with a 11 point victory.  Kentucky 86- UCLA 75.

The game between Kentucky and UCLA features 2 iconic programs.  Kentucky came into the game with a 14 game win streak, the largest in the country.  The game is a rematch from December when UCLA travelled to Rupp Arena to take on the #1 ranked and undefeated Kentucky Team.  UCLA upset the CATS with the Score of 97- 92, giving the Young Cats team its first loss of the season.  Entering the Game UCLA has had a lot of distractions.  Coach Steve Alford is rumored to be leaving the Beautiful Warm  climate of Los Angeles and joining The Indiana Hoosiers as their Head coach, where he was a star player for Bobby Knight in the 1980’s.  Doug Gotlieb of ESPN reports the deal to  be finalized whenever the UCLA season is over.  Lamar Ball the father of the Bruins Star point guard Lonzo Ball has been in the media recently, and has also gathered some unwanted distractions to Lonzo and the UCLA Bruins.  He has been seen on ESPN stating he could beat Hall of Famer Michael Jordan at his prime in 1987.  Jordan was averaging 21 points per game in 87 playing professionally for the Chicago Bulls, and Lamar was playing at Washington  University averaging 7 points per game that same season.  Lamar has also made several Negative statements regarding the Kentucky Wildcats, and Freshmen De’Arron Fox.  Ball has called Fox  a weak player, and his son Lonzo is not only the best player in college but in the NBA as well.  The statements by Ball’s  Father Lamar, has been seen on ESPN on has been criticized by his statements from several ESPN broadcaster.  Kentucky has seen the comments as well, and Coach Cal has used the statements  as a form of motivations for the game against the bruins.

Kentucky started the game with the usual lineup.  De’Arron Fox started at the point guard, Malik Monk , and Isiah Briscoe at the other 2 guards, Derrick Willis at forward, and Bam Adebayo at center. UCLA started the same lineup that defeated the CATS on Dec 6, 2016.  T.J. Leaf at forward, Bryce Alford at shooting guard, Lonzo Ball at point guard, Isaac Hamilton and Aaron Holiday.

The most anticipated Regional Semi final In recent memory began, and from the opening tip the game had the feel of a remarkable game.  Kentucky controlled the tip , and Fox was the first one to get on the board with a driving 2 point basket.  UCLA would answer soon with a 3 point basket from alford.  UCLA would go upt to an early lead of 6-2 as Kentucky struggled to score in the first couple minutes.  Fox soon come alive as he had 6 of  Kentucky’s first 8 points in the game.  Dominique Hawkins who has played outstanding late as a reserve player for the Wildcats came into the game and his presence was felt immediately.  Hawkins Comes into the game and hits a 3 point basket tieing the game at 11 with 14:25 remaining in the half.  Derek Willis came into the game and made his presences known as he hits a  three point basket  giving the cats a lead of 14-11.  Malik Monk who was held scoreless for the first 12:30 of the first half, finally got on the board scoring 2 points giving Kentucky a lead  of 1 point.  The lead wouldn’t last as on the very next play UCLA broke down the Kentucky defense and found T.J. Leaf for a 2 handed slam.  Kentucky would go back to Monk for Scoring  as he hits 2  three point basket late in the half. Kentucky fans become ecstatic with the chants of GO BIG BLUE, and C-A-T-S.  The game was extremely close as the half comes to a close, Kentucky had played great but only had a 2 point halftime lead Kentucky 34-UCLA 32.

The second half began and Kentucky  goes to  Fox right away . He scored 2 points and the Cats had an early 4 point lead.  De’Arron Fox was a different player in tonight’s game.  He came out with a chip on his shoulder and done everything  he could to prove his doubters wrong, perhaps playing his best game of the season.  The other star freshman Malik Monk would also get hot and knock down shots in the  second half.   Monk scored on a 3 early in the half, giving the cats a lead of 6 points.  UCLA wouldn’t go away, as the game stayed close.  Bryce Alford hits a 3 point basket cutting the  lead to 1 point Kentucky 50- UCLA 49. Fox started taking over the game by taking the ball to the rim and scoring on almost every possession.  When Fox scored 2 points on a driving floater with 11:49 remaining in the game, Kentucky was up 6 points Kentucky 57- UCLA 51.  On the Next offensive possession Kentucky would find Monk who makes a contested 3 , the Wildcats now had a little breathing room and were up 9 points .  Bam Adebayo Who normally is very effective and scores the ball often, was held scoreless for the first 32 minutes of the game.  Bam finally scored  on an over the top lob play from Monk.  Hawkins and Willis each made shots in the closing moments, helping increase the Cats lead.  The game was getting late and Kentucky would continue to build on its lead, with 3:12 remaining in the game, Kentucky was up 13 points, Kentucky 71- UCLA 58.  Kentucky would go onto defeat the Bruins by 11 points, Kentucky 86, UCLA 75.   Fox Was the star of the show and finished with a game high of 39 points.  Monk also contributed and had his best game in a long time finishing with 24 points.

Stats for the Game

# 14 Gyorgy Goloman 4 point, 1 foul, playing 6 minutes.
Kentucky will move onto the South Region Finals, where they will meet North Carolina.  North Carolina is the # 1 Seed in the South region.  The game will be awesome and the National Attention that this game will generate will be through the roof. Kentucky and UNC both play similar styles, both like to push the ball up the court, and score in transition.  Both teams live and die based on their 3 point shooting, and both programs have 2 current Hall of Fame Coaches, Kentucky John Calipari  and North Carolina has Roy Williams.  Hopefully, the Confetti will be flying on Fed EX Forum court and Kentucky will be heading to Phoenix, Arizona to compete in the NCAA Final Four.