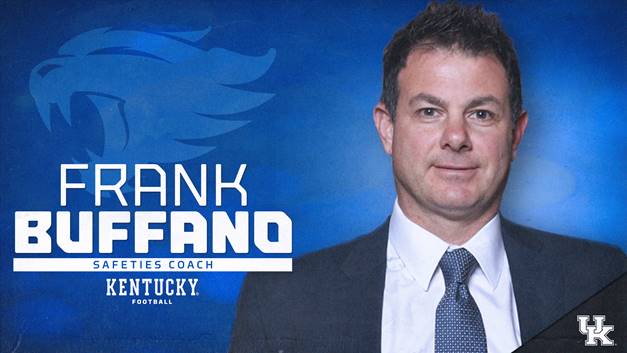 After seven years as the director of football operations for Kentucky football, Frank Buffano has accepted a new role as the safeties coach, head coach Mark Stoops announced today.

“I’m so happy to announce the promotion of Frank Buffano from director of football operations to safeties coach,” Stoops said. “To say that Frank has paid his dues is an understatement. We began in 2004 when he was an undergraduate student at Arizona. He became a graduate assistant coach, then coached at Youngstown State, and has been with us since we came to Kentucky, so he has spent 16 years getting to this point.

“Frank has a tremendous work ethic and obviously has extensive understanding of our system and the expectations of our coaching staff.  I’m excited for our team and for Frank to have this opportunity.”

Buffano joined Stoops’ Kentucky staff in 2013 as the director of football operations but returning to coaching was always in his long-term plan.

“I want to thank Coach Stoops for this opportunity,” Buffano said. “My collegiate coaching career started at Arizona under him when he was the defensive coordinator and when he called me to come work at Kentucky seven years ago it was a no-brainer. Even though it meant I wouldn’t be on-the-field coaching, I knew I wanted to be a part of his program and his vision. Serving as the director of football operations at Kentucky these past seven years has taught me a lot and helped prepare me for this opportunity. The timing was just right and I can’t wait to get started.”

Prior to UK, Buffano served as an assistant coach for three seasons at Youngstown State under Eric Wolford, coaching linebackers in 2011-12 after serving as the secondary coach in 2010.

In 2012, the Penguins’ defense was extremely stingy against the rush, allowing just 95.5 yards rushing per game, the fourth-lowest total average for a season in school history. YSU ranked sixth in the Football Championship Subdivision in fewest rushing yards allowed per contest.

YSU posted a 7-4 overall mark highlighted by a 31-17 win at Pittsburgh, the program’s first-ever win over a Football Bowl Subdivision opponent. The Penguins allowed just 23 points in the last three games, the lowest total in a three-game stretch since 2003.

In 2011 under Buffano’s tutelage, Teven Williams was named honorable-mention All-MVFC and was named to the all-newcomer squad after leading the team with 67 total stops, including 38 solos. The Penguins went 6-5 in the 2011 season, including a win over top-ranked North Dakota State, despite three freshman starters at linebacker most of the season. Of 33 possible starts, 29 were by freshmen and one was by a sophomore. Williams and Travis Williams were both named to the conference’s all-newcomer squad.

In 2010, Buffano coached YSU’s secondary. He had a second-team all-league selection in cornerback Brandian Ross, who went on to sign with the Green Bay Packers as an undrafted free agent. Another highlight on the season was an 87-yard interception return by safety Will Shaw. It was the fourth-longest in school history. During the campaign, YSU started two true freshmen and one sophomore for the majority of the year.

Prior to YSU, Buffano spent five seasons with Stoops at Arizona, serving as a defensive graduate assistant coach his last two seasons after three years of working as a video graduate assistant with the Wildcats. As a graduate assistant, he worked with the defensive backs. He also coached the offensive scout team, broke down game film, helped develop weekly game plans and evaluated film of prospective student-athletes.

In 2009, Arizona posted an 8-5 overall mark, tying for second in the Pac-10 Conference. In 2008, UA reached its first bowl game in nine seasons and finished the campaign with an 8-5 mark as well. The Wildcats played in the Pacific Life Holiday Bowl in 2009 and the Pioneer Las Vegas Bowl in 2008.

Before joining the Arizona program, he was in private business in Ohio and Florida.

The Youngstown, Ohio, native is a graduate of Cardinal Mooney High School, along with Stoops and tight ends coach Vince Marrow. He began his coaching career at his alma mater as an assistant coach for the legendary Don Bucci from 1990 through 1996, working with the running backs and defensive backs for the Cardinals. The program reached the state semifinals in 1990 and 1996. As a player, he was part of the Mooney squad that won the Division III State Championship in 1987.

Buffano graduated with a bachelor’s degree in geography and regional development from Arizona in 2006.

He and his wife, Kelley, have three daughters, Isabella, Gabriella and Olivia.