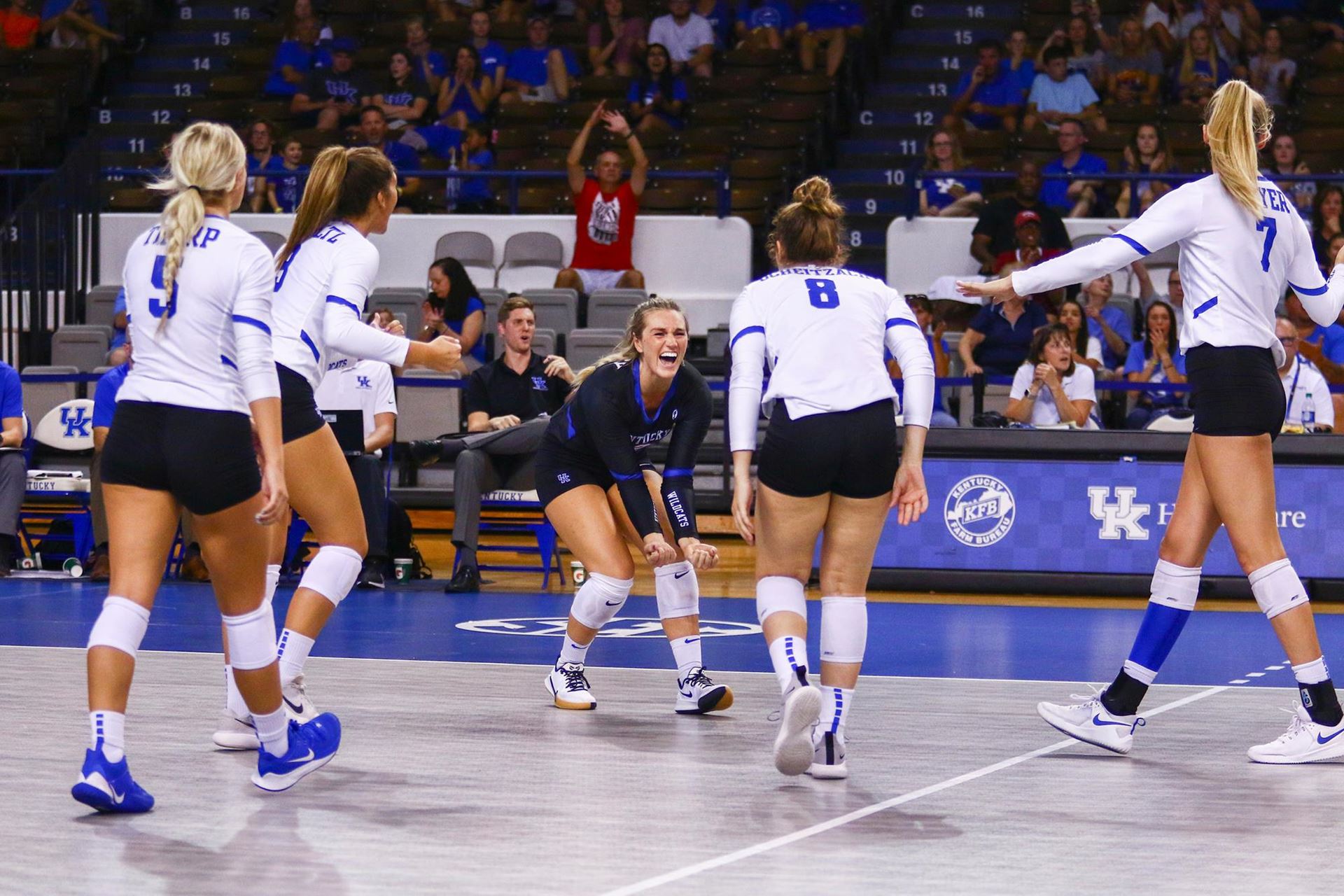 Gabby Curry gets her 1,000th-career dig in loss to Bulldogs

LEXINGTON, Ky. – After rallying to win sets three and four after an uncharacteristically poor performance out of the gates in sets one and two, the No. 12 Kentucky Volleyball saw its 29-match Southeastern Conference win streak snapped by the Georgia Bulldogs on Friday night in five sets at Memorial Coliseum.

With the loss, Kentucky falls to 11-5 on the season and drops its first SEC match since 2017 to fall to 4-1 in SEC play this season.

The Wildcats will look to start a new streak on Wednesday night in Knoxville, Tennessee as Kentucky travels to Rocky Top to take on the Lady Vols. The match will be shown live on ESPNU, ESPN3 and the ESPN app at 7 p.m. ET.

Gabby Curry in the third set became the seventh member of the Kentucky Volleyball program to reach 1,000 career digs. The junior from Buford, Georgia had a match-high 22 digs and also her first kill of the season.

Leah Edmond led the way offensively for Kentucky, as she had 22 kills on 51 swings Friday night. With her 22 kills, she moves now just 18 away from breaking the school’s all-time record for kills in a career. Edmond was joined by sophomore Alli Stumler (16), Caitlyn Cooper (11) and Kendyl Paris (10) who were the four UK players in double-digit for kills.

Madison Lilley had 57 assists in the match, a new season high. The junior’s previous high was 55 vs. Florida Gulf Coast and Southern Cal set in non-conference play. Lilley tallied her ninth double-double of the season with 13 digs to go along with her 57 assists.

Edmond recorded her sixth double-double of the season and third straight with 22 kills and 11 digs. Stumler now has back-to-back double-doubles, as she had 16 kills and 10 digs in the match.

Georgia was the team that took control early in the match, racing out to an early 12-7 lead and forcing the Wildcats to use an early timeout. The Bulldogs controlled the lead and the tempo for a majority of the opening set, leading the frame as much as 18-12 in the mid stages and holding the UK offense to .199 hitting at that point and pushing UK into its second timeout trailing by six. Georgia took a 24-20 lead and Kentucky reeled off back-to-back points to push the Bulldogs into a timeout. A blocking error at the net pushed the Wildcats to within a point at 24-23, but a kill by UGA ended a sloppy first set in favor of Georgia, 25-23. Kentucky hit just .283 in the set, but more uncharacteristically, allowed UGA to hit .289. Caitlyn Cooper had four kills to lead all UK attackers.

The second set was tight for a majority of the beginning stages before the Wildcats scored four points in a row off of Stumler, Edmond and Cooper kills to pull away at 10-7. The Kentucky lead expanded to as much as 17-12 before the Bulldogs took advantage of a service error and two-consecutive attack errors. UGA tied the set for the first time since 7-7 at 20-20 and proceeded to take the lead on the next point at 21-20, its first lead since 6-5 of the frame and Kentucky called a timeout. Back-to-back service aces by the Bulldogs pushed the UGA lead to 22-20. UK would go on a run of successive points to climb back into the set at 22-22 before a monster kill by Georgia pulled the Dawgs back on top. Kentucky’s fifth service error of the match ended the set and Georgia took a two sets to none lead over UK.

After trailing by as much as 19-15, the Kentucky offense got clicking in the third set for the first time all match, as UK went on its first substantial run of the night winning 10 of the last 11 points in the frame to close out the third set, 25-20. The Wildcats were in a world of hurt down 19-15 and with a timeout used, but Edmond and Cooper rose to the occasion with kills on the pins and a huge dig on a set-changing rally by Curry turned the tide of the stanza. Kentucky struggled on offense for a majority of the frame, but a huge kill by Edmond at 20-19 ignited the fuse and the Wildcats coasted to the finish line from there in the frame.

Set four was controlled by the Wildcats from start to finish, as the Wildcats won the frame, 25-15. UK hit .545 in the set paced by 18 kills off of 33 team attacks. Madison Lilley continued to dictate the tempo of the offense as Edmond and Stumler both had three kills in the set with a few aces sprinkled in for the Wildcats, as well. The fourth set was a coast to the finish for UK as it set up a winner-take-all fifth set in Memorial for the second-straight match.

Georgia won three-straight points after the Wildcats took an early 2-1 lead in the fifth. After Kentucky found itself down 7-4, it used its first timeout of the fifth set. After an overturned decision by replay, UK pulled to within 10-9 but the Bulldogs would win the next two points off of converted over passes to take a set-high 12-9 lead and force Kentucky into its final timeout. Georgia would go up 14-10 and close out the match.