Goff, Wildcats Tied for Second on Opening Day of The Blessings 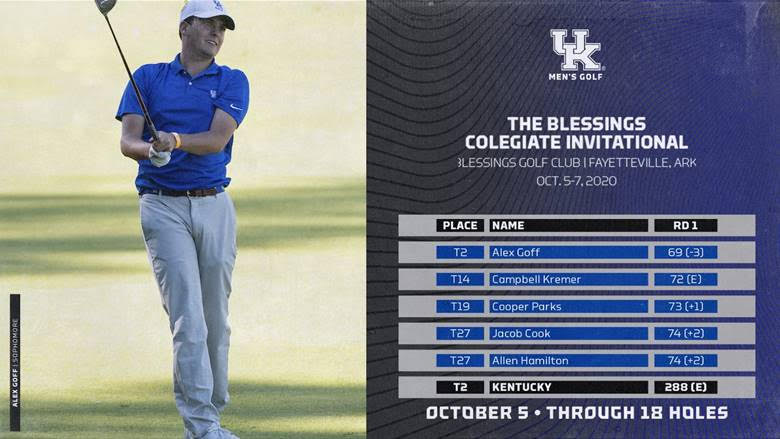 Round One Results | Live Stats | Round Two Tee Times

Paced by sophomore Alex Goff the Kentucky men’s golf team got off to a terrific start at The Blessings Collegiate Invitational on Monday. Goff produced a 3-under-par round of 69 to enter the clubhouse one shot back of the lead and in a tie for second, while the Wildcats concluded the opening 18 holes at even par and tied for second with Texas A&M.

The Wildcats, who are still reeling from the death of teammate and friend Cullan Brown in August, played with yellow ribbons on their caps and his memory on their minds. Goff, a roommate and friend of Brown’s, carried a bag featuring Brown’s name to enhance the team’s tribute. The team not only honored their friend but put together an impressive round despite some ups and downs.

“Today was a nice start for the Cats,” UK head coach Brian Craig said. “I am really proud of our grit today. We had some tough holes, but you would have never known it by the way these guys kept their heads high and their attitudes strong. Honestly, that was how Cullan Brown always approached the game and these guys honored him today with their toughness and big hearts.”

Goff concluded round one in excellent position at 3-under par and just one shot back of the leader. Freshman Campbell Kremer, playing in his first collegiate event, finished in a tie for 14th with an even-par 72. Sophomore Cooper Parks rebounded with birdies on three of the final four holes to get to 1-over par and tied for 19th. Graduate student Jacob Cook and redshirt senior Allen Hamilton registered a pair of 74s and are tied for 27th.

Tennessee concluded the day in the lead by eight shots. UK begins play in round two at 9:58 a.m. ET off of the 10th tee. GOLF Channel will continue to deliver live coverage each night of the tournament from 3:30-7:30 p.m. ET. Live stats will be provided by golfstat.com.

Goff was faced with adversity early with a double-bogey on the par-five second. Three straight birdies on nine, 10 and 11 ignited his round. The highlight of the day for the Kings Mountain, North Carolina, native came at the par-three 13th when he sunk an impressive birdie from distance. He fought off a pair of late bogeys with a birdie on the par-four 18th to move to 69 for the day.

Kremer got off to a quick start with birdies at the third and sixth holes to jumpstart his college career. He finished the front nine at 1-under par. After yielding three bogeys over a four-hole stretch on the back nine, the Louisville, Kentucky, native responded with birdies at the 15th and 16th. He played even par the rest of the way to finish the day in the top 15 on the leaderboard.

Parks was 3-over par at the turn but settled in and produced a 2-under par back nine. He birdied three straight beginning at the par-five 15th to help UK’s cause. He ended the day tied for 19th and is in search of his second career top-20 finish.

Hamilton played the opening nine holes at 1-under par behind birdies at the third, fifth and sixth to help combat a pair of early bogeys. Cook notched a pair of birdies on the back nine to highlight his round of 74.