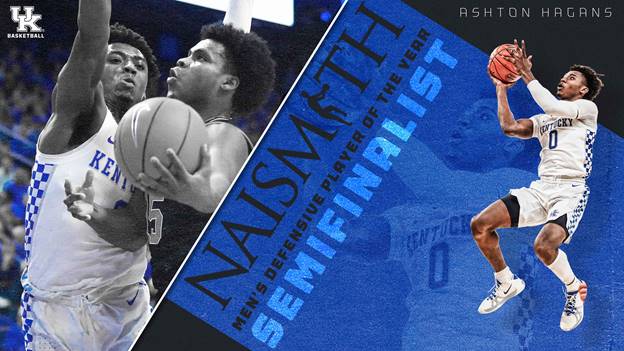 Hagans, the 2019 Southeastern Conference Co-Defensive Player of the Year, remained on the Naismith watch list as the Atlanta Tipoff Club trimmed its list to 10 semifinalists on Thursday.

It’s the second season in a row Hagans has been named a Naismith Defensive Player of the Year semifinalist.

The finalists for the award will be revealed March 12. The winner of the 2020 Naismith Men’s Defensive Player of the Year will be announced April 5 during the Naismith Awards Brunch in Atlanta.

Hagans is once again UK’s best on-ball defender with a team-high 54 steals, oftentimes drawing the assignment on the opposing team’s best offensive player. He’s averaging 1.9 swipes per game, second in the SEC. In just 65 career games, Hagans has already amassed 115 career steals, and his 1.797 steals-per-game career mark is second in school history, behind only Rajon Rondo’s career mark of 2.294

With Hagans spearheading the defensive effort, UK is limiting teams to 38.7% shooting from the floor, among the top 20 teams nationally.

Said national writer Jeff Goodman: “Lots of great defensive players out there, but I’ll take Ashton Hagans over all of them.”

UK’s point guard’s game has evolved in year two and he’s impacting the game in a multitude of ways. Hagans is averaging 11.8 points, 6.5 assists, 4.0 rebounds and 1.9 steals per game while grabbing the leadership reins of a talented but once again young team.

The midseason Bob Cousy Point Guard of the Year finalist has scored in double figures in 19 games, including a career-high 26-point performance in the win over Utah Valley. Hagans has dished out three or more assists in every game and has five or more in 21 outings

With 342 career dimes, Hagans is 12th in program history. His assist average is ranked 12th in the country and tops in the league (through games on Feb. 25).

UK returns to action on Saturday when it hosts Auburn at 3:45 p.m. in Rupp Arena on CBS. A victory would clinch the outright SEC regular-season title and the No. 1 seed in the SEC Tournament.