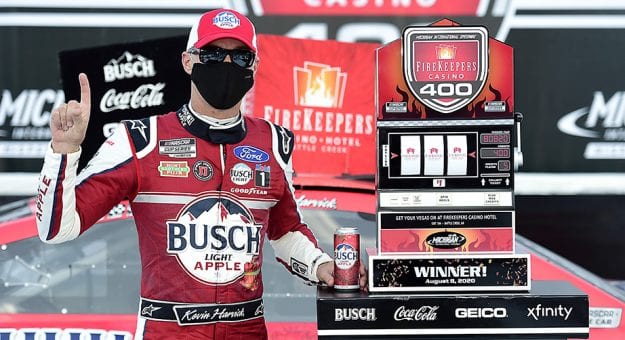 The starting lineup for Sunday’s NASCAR Cup Series race at Michigan featured an inversion of the top 20 finishers from Saturday’s Firekeepers Casino 400,  Kevin Harvick’s victory granted a  20th start position for the second leg of the Michigan Double Header.  Clint Bowyer will invert to pole position and lead the field to green.

Clint Bowyer cruised to a Stage 1 win. Bowyer led every lap on his way to his third stage win of the year and sixth Stage win of his career.  Bowyer will receive 3 playoff points with Stage 1 win.

Clint Bowyer could not repeat his previous Stage performance, as Harvick drove to the front and held on for his fifth stage win of the year.

Harvick led every green-flag lap of the second stage.

Ryan Blaney took the lead in the early section of Stage 3 right before the first major crash of the race.

His Team Penske teammate Brad Keselowski crashed into him, knocking them both out of the race and giving Hamlin the lead:

Aric Almirola circulated to a temporary lead after staying out before a restart.  A  secret code w miscommunication with Almirola’s crew chief will pay dividends as the teams whom opted to pit, advance.

Kevin  Harvick regained the lead back with 15 laps remaining. Hamlin records the fastest lap of the race attempting to real in race leader Harvick.

2 Laps to checkers Harvick guards his position from a late-race challenge from Hamlin.

Kevin Harvick recorded his sixth victory of the season, which broke a tie with Hamlin (5 wins) for the series lead with six races remaining before the start of NASCAR’s playoffs.