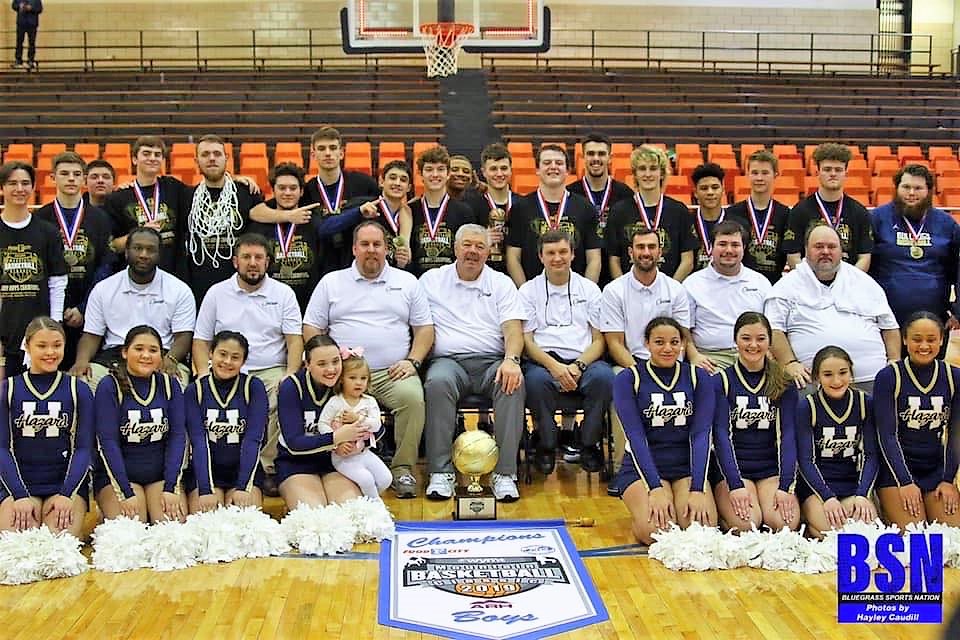 The two top seeds met in the Championship game of the 2019 WYMT Mountain Classic at Knott County Central High School.  Clay County was the #1 seed and defending champion of the tournament.  They got to the finals with a 94-50 win over Pike County Central and a 75-61 win over host Knott County Central.  Hazard defeated Phelps 61-55 and Martin County 52-40 to reach the championship game.  Hazard had not won the tournament since 2014, but it was the Bulldogs who came away with a 57-43 victory to claim their 5th championship in tournament history.  It was also the 5th title for Hazard coach Al Holland.  He won 3 times at Perry Central and twice while at Hazard.

Two free throws by Evan Langdon cut the lead to 14-10, but Wade Pelfrey answered with a 3-pointer to extend the lead back to 17-10 with 6:39 to go in the first half.  The two teams traded scores back and forth and Hazard maintained a 28-21 lead with 2:44 to go in the 2nd quarter.  At the 2:21 mark, Coach Glenn Gray of Clay County was assessed a technical foul.  Wade Pelfrey made both free throws and a Reece Fletcher lay-up gave Hazard their biggest lead of the game at 32-21 with 1:51 on the clock.  Connor Robinson answered with a 3-pointer for Clay County, but Jarrett Napier’s 3rd 3-pointer of the half staked Hazard to a 35-24 halftime lead.  Jarrett Napier and Reece Fletcher had 9 points each for the Hazard Bulldogs, while Clay County’s Evan Langdon led all scorers with 11 points.

Coach Al Holland slowed the pace way down in the third quarter. Both teams made 3 field goals and scored 7 points each in the quarter.  Hazard maintained a 42-31 lead at the end of the third quarter on a Noah Niece 3-pointer.

Logan Hall opened the scoring for Hazard in the final period extending their lead to 44-31 with 7:26 to play.  Reece Fletcher scored 7 of Hazard’s next 9 points capped by a free throw that gave Hazard their largest lead at 53-39 with 1:48 to go in the 4th quarter.  Hazard turnovers and 2 baskets by Clay County cut the lead to 53-43 with 0:43 on the clock.  Jake Johnson and Reece Fletcher made 2 free throws each to give Hazard the 57-43 victory.

Reece Fletcher had a huge game for Hazard with 18 points and 16 rebounds.  Hazard dominated the rebounding battle 32-11 (unofficially).  Connor Robinson led Clay County with 15 points off the bench. Evan Langdon finished the game with 14 points, only 3 coming after halftime.  Wade Pelfrey was named MVP of the tournament, with Logan Hall, Reece Fletcher, and Jarrett Napier making the all-tournament team.

UP NEXT
Hazard will play Leslie County at home on Tuesday, December 17.

Clay County will play Madisonville – North Hopkins at the King of the Bluegrass on Friday, December 20.