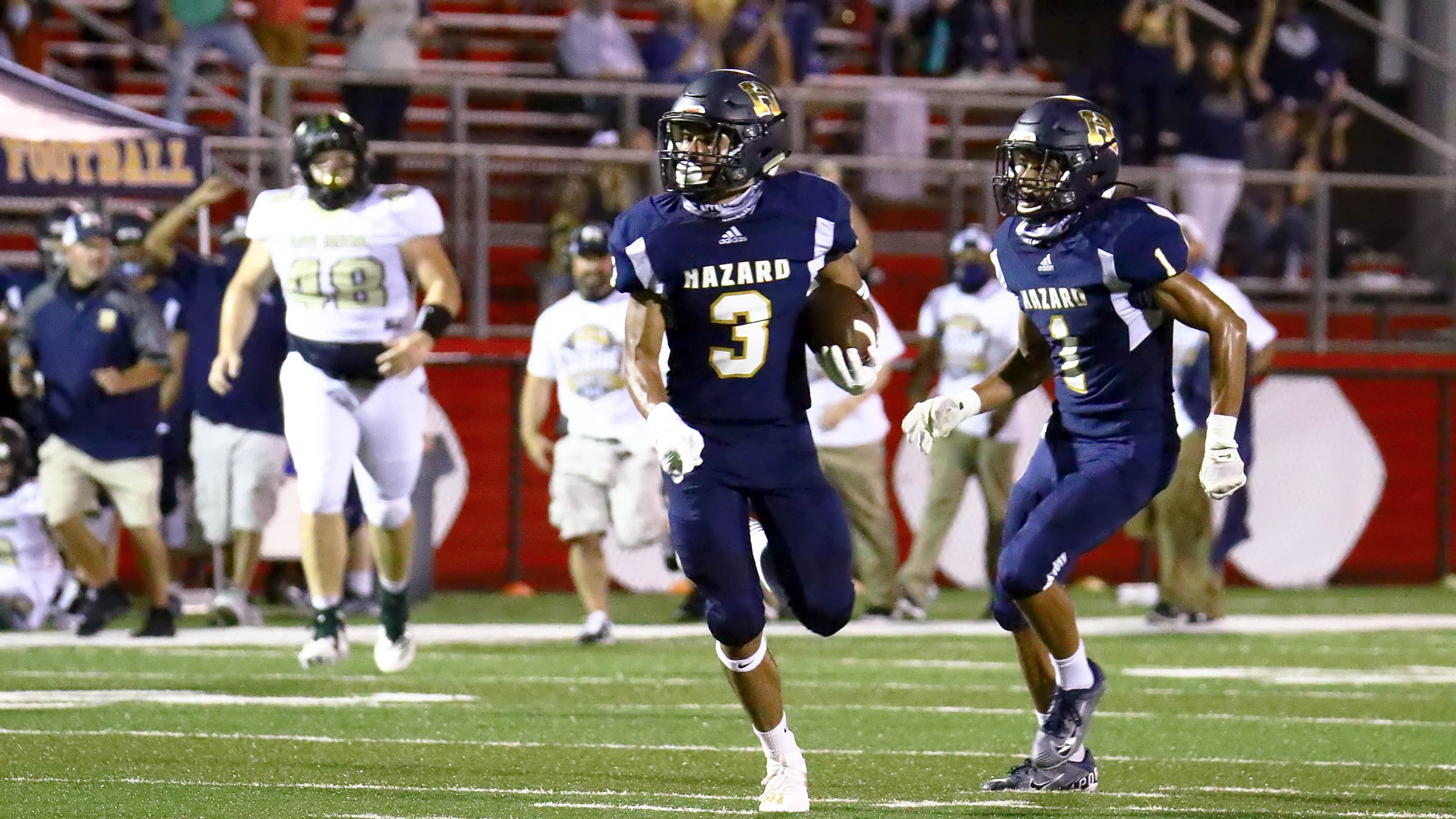 High school football staged a festive return to play in the mountains after the uncertainty of if a season would be held due to the Covid-19 pandemic. The first ever Bill Dixon bowl was hosted at Perry County Central on Friday and Saturday nights and featured one high school football game on each day. The second night saw the Hazard Bulldogs and the Floyd Central Jaguars pitted against one another to begin their respective seasons.

Both teams saw the expected “rust” from the intense offseason become a factor early in the game. The Bulldogs and Jaguars traded unsuccessful drives to begin the first quarter and the possession returned to the Bulldogs. After a slow start to the drive marked by a penalty, snap miscommunication, and pass incompletion, a swift draw run set the Bulldogs up to complete a 41 yard touchdown off of a screen pass from senior quarterback Garrett Miller to junior wide receiver Tyson Turner. Jonah Helm netted the PAT to put the bulldogs up 7-0 with 5:11 to play in the first quarter.

The rush-first offense of the Jaguars failed to piece together another offensive drive and were forced to punt the ball back to the Hazard Bulldogs, but senior linebacker Brant Potter came up with a huge interception that kept the Bulldogs from adding to their point tally. The Jaguars took possession and a sack by sophomore defensive back Max Johnson capped off the first quarter with Hazard leading 7-0.

The Jaguars opened the second quarter by sticking to their run first offense and riding it down into the red zone where they racked up yardage on pass interference and face mask penalties against the Hazard defense. A rush from senior quarterback Caleb Hager from a yard away put the Jaguars on the board for 6, where they would stay for the moment after a failed 2 point conversion attempt following the touchdown. The Bulldogs quickly threw back a punch by way of a Max Johnson kickoff return to midfield that would start the Bulldog offense in excellent field position.

First year head coach Dan Howard sent the Hazard offense onto the field with the other half of his dual quarterback system: senior quarterback Nick Miller. Nick Miller and Garrett Miller would share possessions for the entire evening. Nick Miller led the offense down the field with a couple of long scrambles, but the Bulldogs 4th and Goal pass was intercepted in the end zone. The Jaguar offense then took over only to have sophomore cornerback Hank Pelfrey snatch away a pass from a Floyd Central receiver to manage an interception of his own. Hazard quarterback Garrett Miller wasted no time in completing a long pass to Max Johnson, who caught the pass and juked his way down to the 1 yard line. Garrett Miller ran it in and Jonah Helm sank the PAT to update the score at 14-6 in Hazard’s favor.

With the first half winding down the Jaguars attempted to gain ground through the air but gave up possession when Max Johnson grabbed an interception and followed it with a long return toward the end zone. Garrett Miller threw a touchdown to Junior wideout Andrew Ford from 20 yards out to close the first half at 21-6 Bulldogs after Jonah Helm remained perfect with his leg.

The second half began with a strong drive by Floyd Central that was once again extinguished by a turnover. Hazard recovered a fumble only 2 yards away from giving up a touchdown. Hazard wasn’t able to provide much offense and was forced to punt the ball back to the Jaguars. The Jaguars quickly took advantage of their field position by finding the end zone by way of a quarterback keeper from Caleb Hager. Another failed 2 point conversion made the score 21-12 Bulldogs. The Bulldogs again responded with a strong kick return from Junior Tyson Turner, but couldn’t capitalize after a failed 4th down conversion. The Jaguars immediately exploded for a 78 yard touchdown pass from Caleb Hager to Brant Potter and came within three (21-18) after another failed 2 point conversion.

Hazard’s offense was again absent as an interception put the ball back into Jaguar control. After a long rush by senior running back Jordan Akers, quarterback Caleb Hager again found the end zone on foot and pushed Floyd Central ahead 24-21. Tyson Turner responded with another long kick return that started the Hazard drive. On 4th and 1 in the red zone with 3:11 left in the game, Hazard lost a snap and was unable to convert. The Jaguars drive was also unsuccessful and forced a punt back to the Bulldogs with 1:00 to play and the ball at their own 15. The Garrett Miller to Max Johnson connection took the Bulldogs to the other 8 yard line. With 8 seconds to play, the Bulldogs were downed by another muffed snap and watched as the time ticked to zero with the score reading: Floyd Central – 24, Hazard – 21.