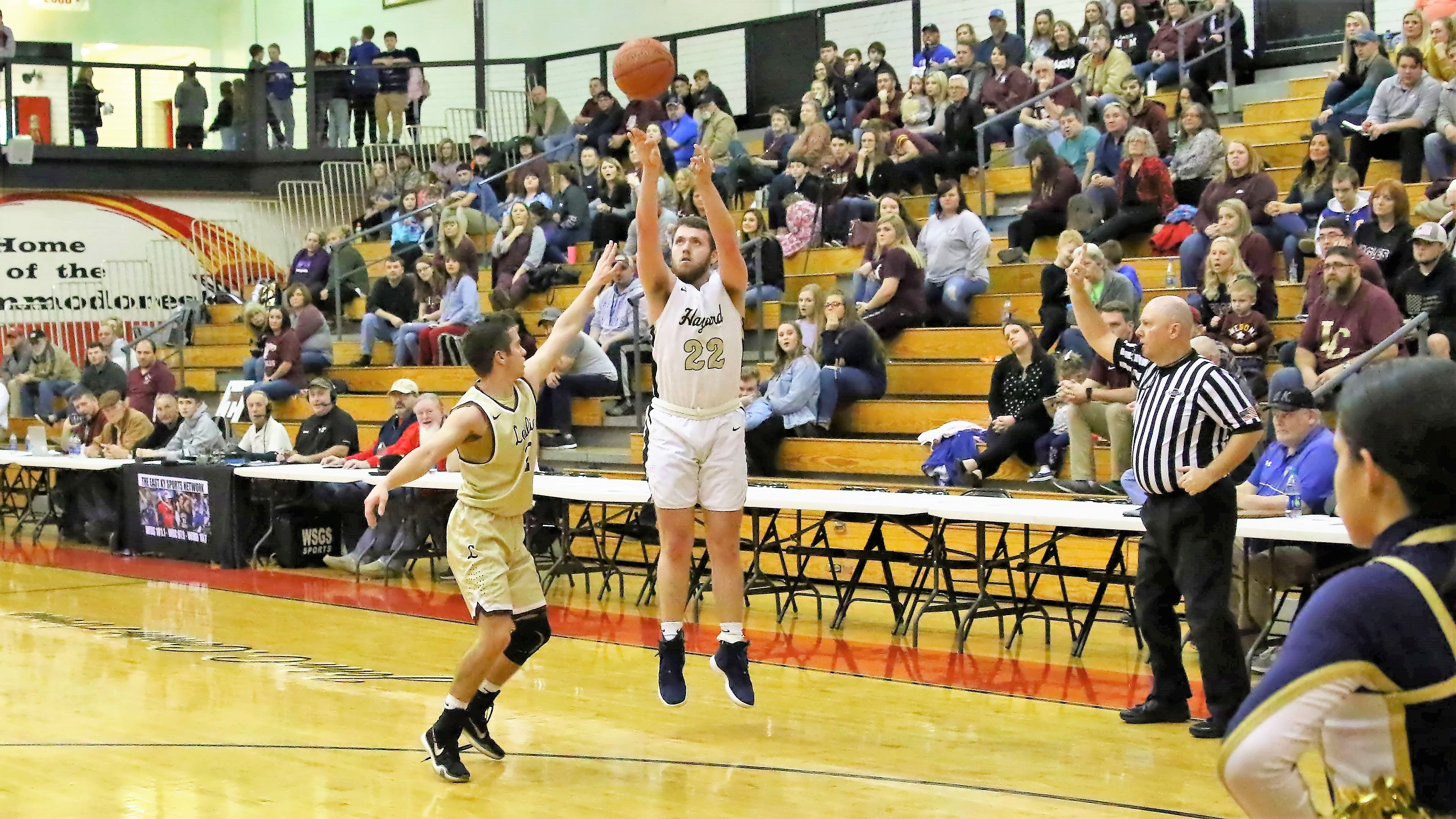 Jacob Johnson chosen as Player of the Game with 17 points.

John C. Combs Arena- The Boys 54th District Basketball Tournament opening round tipped off tonight as the Hazard Bulldogs (23-7) battled the Leslie County Eagles (7-19).  Tonight’s matchup is the fourth time this season the two teams have played as Hazard in previously 3-0 against the Eagles.  Although, Hazard is undefeated against the Eagles the margin of victory has been decreased each contest with the Bulldogs margin of victory ranging from 20 points during the first contest to 10 points in the last contest. Tonight’s game should be won by the team that wins the boards and commits the least number of turnovers.

Entering tonight’s contest Hazard sets atop the Region standings at 23-7 overall, 12-5 in Region play and 4-3 in 54th District play.  Hazard is one of the favorites to not only win the District but has a legitimate chance on winning the 14th Region.  Leslie County has struggled this season with an overall record of 7-19, 5-9 in Region play and 1-5 in District play.  Although Leslie County has a losing record the Eagles are a scrappy team and one of the most physical teams in the entire region.

Hazard gets the tip and immediately look for Reece Fletcher down low to score the ball.  Fletcher scores on the first possession and scores soon after with another basket in the post.  Hazard is much bigger at the center and forward positions and early on the offense revolves around talented forwards Reece Fletcher and Logan Hall.  Hazard leads Leslie County 6-0, but Leslie Counters with a 5-0 run.  Recce Fletcher adds another basket late in the quarter and Hazard leads Leslie County 9-5 at the end of the first quarter.

In the second quarter the scoring picks up for both teams.  Hazard’s Reece Fletcher picks up an early personal foul, his second of the game forcing the talented big man to set the remainder of the half.  Hazard’s Austin Bennett gets hot from behind the ARC with a made 3PT baskets early in the quarter.  Hazard continues to look inside for scoring and forward Jacob Johnson scores on several baskets in the low post.  For Leslie County scoring comes form Trenton Day with multiple baskets in the quarter.  With 2:17 remaining in the half Hazard leads Leslie County 24- 14.  Hazzard Austin Bennett connects with another 3 PT basket late in the quarter and Hazard leads Leslie County 27-16 at intermission.

Hazard continues to look for the ball down low in the third quarter taking advantage of the size mismatch against the Eagles.  Hazard is a much bigger team and the Bulldogs look to the post for Logan Hall, and Jacob Johnson.   Reece Fletcher doesn’t score in the quarter but is a force on the boards grabbing several critical rebounds.  Leslie County was able to keep the game close with the play of Trenton Day and Trent Asher, cutting the Bulldog lead to five points with 3:40 remaining in the quarter.  Hazard’s Jacob Johnson scores the ball late in quarter and the Bulldogs lead Leslie County 41-33 at the end of the third quarter.

Hazard starts to pull away in the fourth quarter putting the game out reach, again with the scoring in the post by the two talented Forwards in Logan Hall, and Jacob Johnson.  Leslie County continues to compete, but the size advantage of the Bulldogs is too much to overcome against the smaller Leslie County Eagles.  Midway through the fourth quarter Hazard develops a comfortable 18-point lead, Hazard 53- Leslie County 35.  With the lead Hazard starts to hold the ball eliminating possessions by the Eagles.  Austin Bennett Of Hazard continues to be effective from behind the ARC knocking down several shots in the quarter.  Hazard goes on to defeat Leslie County 58- 43 advancing to the Boys 54th District Championship game playing the winner of tomorrow night’s game between the Buckhorn Wildcats and the Perry County Central Commodores.

Hazard’s # 22 Jacob Johnson is chosen as the Player of the game presented by the National Guard Armory.  Johnson was tied with Austin Bennett with 17 points in the game.