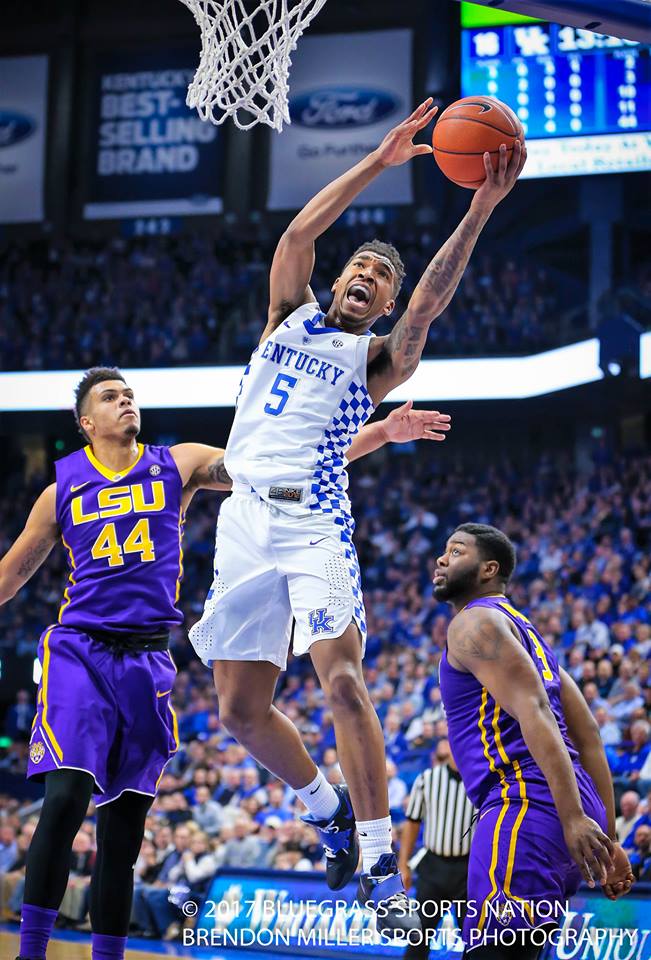 Monk on the drive vs LSU – Photo by Brendon Miller

During Kentucky’s recent slide toward “rock bottom,” everyone wants to know what’s wrong with the Cats. Anytime the team loses a single game, people invariably start asking questions. Whenever the team loses three out of four, then all of BBN immediately plunges into full panic mode. Unfortunately, I don’t have any of the answers. That’s for others above my pay grade and security clearance to figure out. I’m here simply to give you a taste of what it’s like to report on the action.

One of the biggest challenges in my new media gig has been interviewing the players. Just picture an old fifty-something year old geezer trying to have meaningful conversations with 18-year old kids right out of high school. Or imagine having someone like Jerry Tipton hovering nearby, scribbling notes on his yellow legal pad about everything being said. The situation can get a bit creepy really quickly. I think you get what I’m talking about.

Nevertheless, I’ve tried to soldier on, learning as much as I can in the process to bring my readers the latest and most interesting Wildcat news. There are only so many routine questions that can be repeated before your mind starts wandering, so rather than focusing on individual player responses, I thought I’d give you a quick glimpse of my impressions of the individual players behind the responses.

A day before each game, UK usually schedules a media opportunity with two different players. The choice of who is made available is fairly random but appears to be done on a rotating basis based on who is performing well at that particular time. Then after each individual game, players are usually selected for interviews based on their performance during that game. For example, after the 92-85 victory over LSU, Wenyen Gabriel and Bam Adebayo came out to face reporters. Rather than just focus on those two, I thought I’d just give you the scoop on the entire team.

We’ll start with senior forward Derek Willis. Derek always presents as if he just rolled out of bed and you’re somehow interrupting his daily nap. His even-keeled demeanor is a reflection not only of his personality but his boredom of having answered the very same questions for the past four years. Please, no more questions about his defensive weaknesses. As Coach John Calipari said recently, “He’s a SENIOR! He is what he is.”

De’Aaron Fox answers questions as if he’s the class valedictorian—confidently and affably as someone comfortable in his own skin. He’s extremely eloquent and articulate and reminds me of Karl-Anthony Towns. In other words, almost too nice to be real. He’s always good for a quote and he’s been interviewed a lot, as evidenced by his numerous player of the game and SEC player of the week honors.

Fellow freshman Malik Monk is also a sweet interview. Malik listens intently to your questions and usually responds in an engaging fashion—chuckling, winking, joking, and gesturing as if you were his long-lost cousin. Just like his moves on the court, his moves behind the microphone will frequently catch you off guard. With Malik, you have to let him smile. Don’t let anybody stifle his personality.

Listening to Isaac Humphries is like listening to someone recite poetry. Maybe it’s the Australian accent, but the sophomore center from Down Under answers questions with the aplomb of a college professor—thoughtfully and analytically as if you’ve just inquired about the mystery of life. He’s a multi-talented cultural dude. Best to save the moon pie and Ale-8 references for someone else.

Speaking of endearing southern treasures, how about Dominique Hawkins? The senior from Richmond has a perpetual smile on his face. As a dentist, I can’t take my eyes off his pearly whites—and he flashes them constantly regardless of the questions or the mood. A visit with Dom is better than going to your shrink. I promise you’ll leave happier than when you came in.

Be prepared to respond when interviewing Isaiah Briscoe—especially when he starts stroking his chin. I think he enjoys playful banter with reporters more than anyone else. He’s quick with a quip, he understands sarcasm, and he’s not afraid to put you in your place whenever you fire off the proverbial “dumb” question. If you want a good sound bite about Coach Cal, Isaiah is your “go to” guy.

I’m still scared of Bam Adebayo. His bulging biceps look like they’ll punch you in the face at any minute. Combine that with the scowl on his face, the scar under his right eye and well….you get the picture. I always try to make him laugh. When he finally gives you that disarming smile, you feel like you can actually breathe again. And yes, it’s true—No Dwight Howard references please!

Wenyen Gabriel is about as friendly as they get. He’s like the teacher’s pet, the neighborhood kid who shovels your driveway, or your child’s most well behaved friend. He wants to please. You want him to do well, throwing him questions like floaters in the lane that he can easily swat away.

Mychal Mulder is deceptively smooth. Just like his jump shot, his answers are sweet and frequently on target. He smiles at just the right times, answering questions without interruption as if reading meticulously prepared responses off a Big Blue teleprompter. I can see him someday becoming a coach, or politician, or President.

I’m mesmerized by Tai Wynyard’s New Zealand accent. Those lilting Kiwi tones just don’t mix well with talk of physically violent play. When I heard Tai say “Next Mahn Up” in a recent interview, I felt like I was watching a young Russell Crowe getting ready to do battle in Gladiator. Whether playing two minutes or riding the pine, he’s always ready for action. How can you not love the kid?

Just like his presence on the court, Sacha Killeya-Jones has been missing in action on the interview circuit. The one or two times he’s been available, he certainly looks the part—tall, athletic, intelligent, nice hair, and good sense of humor. It’s just that when you rarely get off the bench, there’s just not a whole lot you have to say. Hopefully that will change in the upcoming weeks.

I’m not surprised that all these kids are intelligent, well spoken, high character individuals. After all, they’re exactly the type of players Cal recruits to represent the UK program. Maybe they’re even “too nice” out on the basketball court. But for a novice like me, looking to deliver quality content and endearing stories, they’re as perfect off the court as they could possibly be.