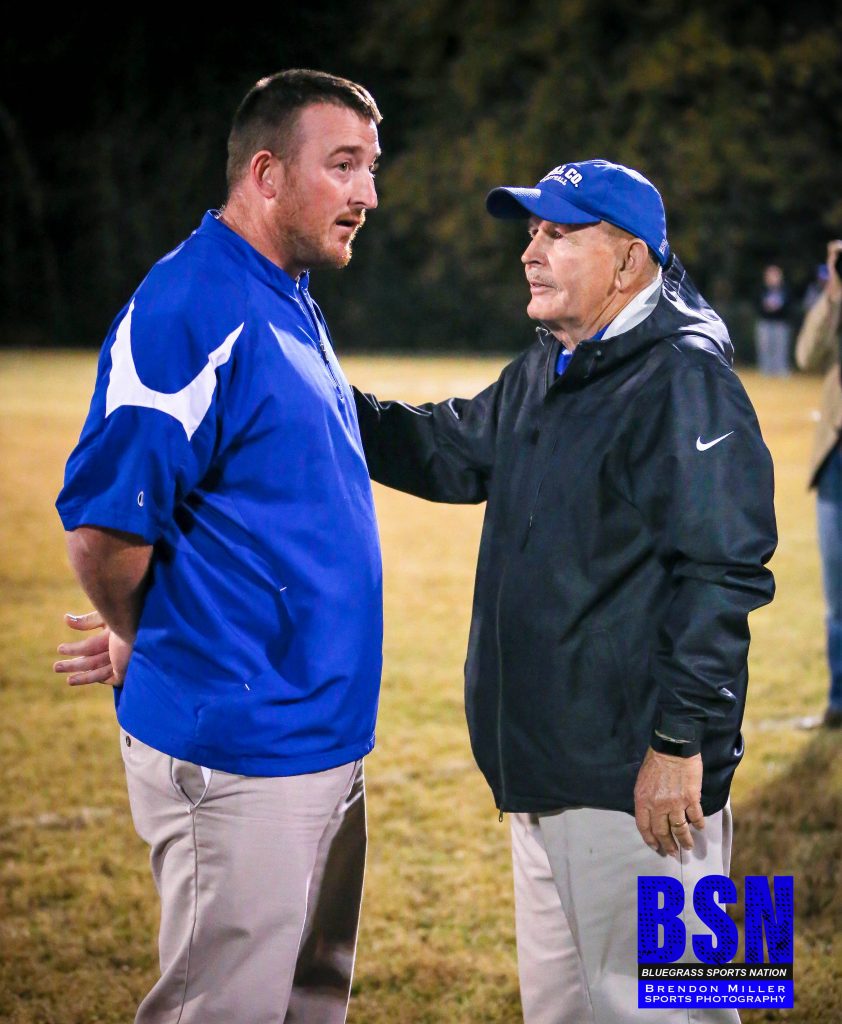 Bell County was put on the map by a legend in Dudley Hilton.  Coach Hilton has led Bell County to several region titles, and has also won a couple state championships on Log Mountain, with the most  recent coming in the 2008-2009 season.  Oddly enough, Breathitt County’s last trip to the State Championship was the same year when they lost to Louisville Central.  Coach Hilton started his career at Breathitt County, before taking the job at Bell.                 Coach Hilton left Bell County and hit the college ranks when his son, John Dudley, graduated and went to UPIKE to play football.  Just as Coach Hilton did in high school, he would take the head coaching job at UPIKE and try his hand at the college ranks.

I mentioned before that Bell and Breathitt have a lot in common. Breathitt has a legendary coach on their staff as well.  Coach Mike Holcomb led the Breathitt Bobcats to 3 state championships, and 4 appearances in a State-Title game during his time as Head Coach.  His teams won 42 consecutive games between 1995-1997.  Under his direction Breathitt High became a house hold name.  Many called Breathitt, “Quarterback U.”  From the mid 1990’s through the early 2000’s, the quarterback position at Breathitt was garnered as the best quarterback in the region. Waylon Chapman, Kyle Moore, Allen Sperry, Justin Haddix, and Jacob Hundley all would play collegiate football from the quarterback position.  Coach Holcomb’s offense was feared across the state as Breathitt looked to air it out every Friday night.

Coach Holcomb is viewed by many as a genius when it comes to offensive play calling.  His offenses in Breathitt County set and broke several records through his time as Breathitt Head Coach. Coach Holcomb stepped away from Breathitt for a short period of time, as he took over the Letcher County Central Head Football Coach position.  Coach Holcomb’s first year at Letcher only saw 4 wins.  In his second year, the cougars busted out a 9-3 record, losing to eventual State Champs Pulaski County. Coach Holcomb, retired after the 2015 season and joined Coach Kyle Moore’s staff at Breathitt High in 2016 and has been there since.

Coach Moore has done a little rebuilding himself. Coming into this Friday night, Breathitt boasts a 7-3 record.  The best record they have had since 2013.  Coach Moore and his staff have done an outstanding job.  The task that Coach Moore had when accepting the head coaching position is unlike anything Coach Hilton or Coach Holcomb faced.  Coach Moore accepted the position in the midst of the state department of education taking over the school district.  One of the first acts the state took….was eliminating the Breathitt County feeder system.  Any coach knows, a good feeder system is the blood line a successful high school program.  On top of that, Coach Moore had to face unrealistic expectations by a fan base that was used to winning not just games, but championships.

As for the present…..Both teams will be looking to punch their ticket for a regional championship game.  It will undoubtedly be a physical contest and both teams will be well prepared. Bell County comes wanting to run the ball.  In their only loss of the season to Corbin, they were still able to rush for 330 yards.  #4 London Stephney is a huge contributor of their running game as he posted 138 yards on 19 carries in that game.  Colby Frazier and Keagen Lefevers respectfully combined for 186 yards on 27 carries.

From a former player’s perspective it is easy to look ahead at matchups when you are favored to win.  Breathitt was a victim of this last week as they kept shooting themselves in the foot with ill-advised penalties and missed blocking assignments.  There will be no over-looking Bell County this Friday night.  Breathitt, although the home team on the scoreboard, will be the underdog just as they have been all season.  Nobody gave this team a shot at being District Champs at the beginning of the season.  Nobody gave them a shot at posting a winning record, and nobody believed that this team would be hosting a second round playoff game, but here they are.

There is a lot on the line this Friday night.  Breatthitt has their eyes set on their first Regional Championship Game since 2012.  It would also mark the 1st Regional Title appearance in the Kyle Moore Era as Breathitt Head Coach.  Bell County at 10-1 still have a lot to prove as well.  They won’t be considered “BACK” until they get the monkey off their back. That monkey…. Is a Breathitt County Boy who is undefeated against Bell County.  Justin Haddix is undefeated against Dudley Hilton and the Bell County Bobcats since becoming the Head Coach at Corbin.  At 10-1 the lone loss for the Bell Bobcats was to Corbin.  Obviously Corbin has to take care of business this week as well but whoever leaves the River Bank with a “W” will most likely be traveling to Corbin for a regional championship showdown.  For those too young to remember, Corbin has a bad taste in their mouths when it comes to Breathitt County.  In 2002 Breathitt crushed Corbin by a score of 51-0 in the 2A State Championship. The quarterback for the Bobcats….None other than Justin Haddix their current head coach.

That is next week, but this week…..when the clock hits 0 Friday night, the Bobcats will be winners.  Whether it’s the Bell County Bobcats or the Breathitt County Bobcats, that is the question.  The atmosphere on the River Bank will be reminiscent of the mid 90’s-early 2000’s.  Undoubtedly the Mike Holcomb Athletic Complex will be packed, and these two teams will leave it all on the field.  Who will be headed to the Regional Championship, and who will be putting the pads up for good?  Find out this Friday night as Breathitt County hosts Bell County.  If you aren’t able to attend, you can stay connected to all the action by liking our Facebook page, and visiting our website at www.bluegrasssportsnation.com

Thanks to our sponsors of Breathitt Football this week: