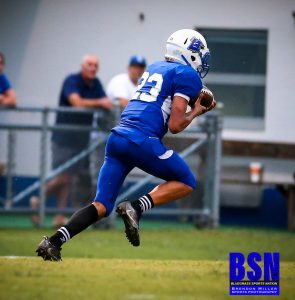 September 6, 2018 – CASEY ALLEN – Bluegrass Sports Nation Breathitt Football Columnist
When you think of Eastern Kentucky high school football two schools are usually in everyone’s conversation.  The Breathitt County Bobcats and the Prestonsburg Blackcats are both prestigious football programs located just 45 minutes apart.  In the early 2000’s you could not go to a KHSAA State Championship game unless you went through both schools.  The teams have met several times in the playoffs, resulting in one of the fiercest rivalries in Eastern Kentucky.  Since KHSAA re-classification a decade ago, the programs have been in separate classes, putting a strain on the rivalry, and will be fully reborn next season when Breathitt moves down to 2A and the schools will be District Rivals once more!

Both schools vowed to kept the rivalry alive as they would meet in consecutive years from 2007-2010, and split the series two games a piece, but would not play again until 2015.  Coming into this Friday’s game they have played each other three consecutive years, with the Blackcats besting the Bobcats all three meetings.

Both teams come into this week looking for their first win.  The Bobcats, though 0-3, have made strides in the right direction improving every week.  Last week was a heart-breaking loss as they lost the lead with just 25 seconds left in the game.  Prestonsburg however, will make the trip to the River Bank losing both of their first two games by a combined score of 85-14.  The Blackcats return Ethan Varney and Ryne Slone who lead the Blackcats in rushing last year.  In their matchup against the Bobcats last season, those two backs combined for 391 yards, and six touchdowns on 34 carries.  With a new Head Coach in Brandon Brewer who likes to run the ball often, it’s safe to say these two backs will see a lot of action Friday night.

The Bobcats may be 0-3 but the growth that this team has shown over the past three weeks is remarkable.  Defensively the Bobcats have improved drastically in both tackling and taking care of their assignments.  Breathitt has played some stiff competition thus far as well.  Their opponent win-loss record through the first three weeks of the season is now a cumulative 8-1.  The Bobcats have also played some incredible talent.  Most notably Jayden Neace of Perry County Central, who is taking the state by storm with his power and speed.  The tough scheduling by Coach Moore is by design, as the Bobcats are preparing for a Class 3A District 7 title run.

The Bobcats will be looking to make a statement Friday night.  Led by sophomore quarterback Braxton O’Hara the Bobcats have the ability to be an explosive offense, with a balanced attack of throwing and running the ball efficiently.  The Bobcats have been close, but close doesn’t win ball games, and they will need to put it all together this Friday to beat a hungry Prestonsburg team.  Being around the Bobcats’ practices this week, I am confident that is exactly what they are going to do.

In a game where both teams are winless, something has got to give.  This might be the best game in Eastern Kentucky this week.  If you are a fan of Mountain High School Football, I’d suggest making the trip to Jackson, this Friday night.  There will be plenty of fireworks in this one as this old rivalry gets more intense in preparation for District play next year.  If you are not able to make the trip, stay connected by visiting our Bluegrass Sports Nation facebook page, and our website at www.bluegrasssportsnation.com