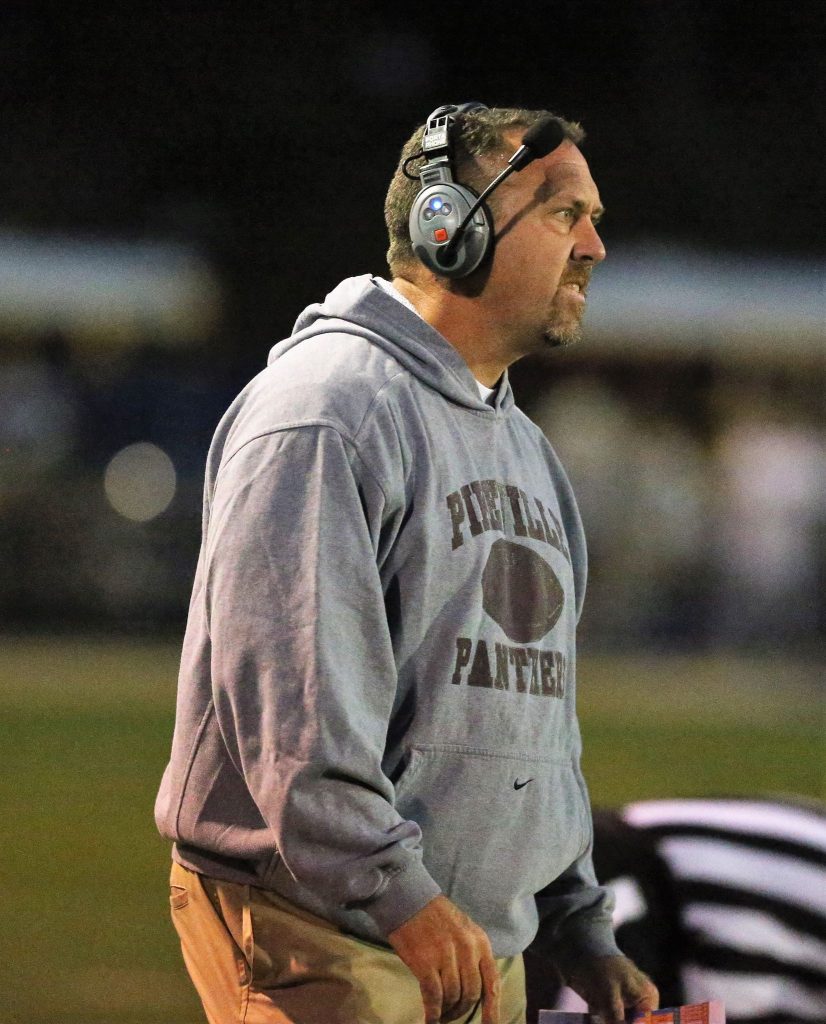 If you are from eastern Kentucky and love high school football, then you know all about the Pikeville-Belfry rivalry. For those who don’t know…..These two schools are located within 25 miles of each other and in the same county, these two schools fight it out each year to claim Kings of Pike County on the football field. They have combined for 9 state titles and countless regional and district crowns. People from all over the state made the trip to Pikeville to see these two powerhouses under the Friday Night Lights. These two teams would not disappoint.

Pikeville won the coin toss and chose to receive. After moving the ball on the ground the drive would stall out on an incomplete pass. Belfry would capitalize on their defensive stand as their run heavy offense would drive the length of the field on 6 plays with 4 different players touching the rock. Kevin Browning topped the drive off from 8 yards out making the score with just over seven minutes left in the first quarter, 7-0 in favor of Belfry.

Pikeville would run the ball effectively on the ensuing drive with a heavy dose of Zack Roberts. The Belfry defense would again stiffen up and force the first turnover of the game by intercepting a Connor Roberts pass. The Pikeville defense would answer by forcing the first punt of the game. Pikeville’s offensive would prove that Belfry wasn’t the only school who could run the ball as they would put together a 13 play drive deep into Belfry territory. Unfortunately for the Panthers  they would turn the ball over again on an interception.

Belfry would run a sweep with Ben Bentley who turned on the jets as he scored from 66 yards out. The Pikeville faithful would become silent as the Pond Creek Nation would celebrate a 2 point conversion making the score 15-0. The Pikeville Panthers showed their poise on their next possession as they methodically drove the ball down the Pirates throat on a 12 play, 76 yard drive. Pikeville finished the drive off on a bruising 10 yard dash by Zack Roberts. Belfry’s lead was cut in half 15-7.

Pikeville’s defense would shut the Belfry rushing attack forcing their second three and out of the game. On the ensuing drive with 3 minutes left in the first half, the Panther offense kept the ball rolling as their dual threat quarter back Connor Roberts showed his ability both on the ground and through the air. He would put the Pikeville offense on his back and find pay dirt from 3 yards out. With 1:06 seconds left in the half the Pikeville Panthers went for the two point conversion and tied the game at 15 points each.

Many would think that 1 minute left in a half wouldn’t be enough time to score with a ground and pound offense like Belfry. That wasn’t the case last night as Belfry would yet again score on a one play drive. This time Isaac Dixon’s number would be called as he blasted through the Panther defense for a 80 yard touchdown run. Point after try was good and we would go to the half with Belfry leading Pikeville 22-15.

The final score in this game would not indicate just how good of a game it truly was. Although the final score was 36-21 this game could have easily been a one possession game. The Panthers turned the ball over three times. Two of those turnovers resulted in touchdowns for the Pirates. That ultimately would be the difference in the game.

These two teams couldn’t have played each other more evenly. Both offensive lines were impressive opening huge holes for their backs. Pikeville even had a drive that saw 21 plays and gobbling up 92 yards. When these teams watch the film, it will serve both well. Pikeville will need to eliminate turnovers. Belfry will need to sure up their defensive line.

Offensively both teams had a lot of success. Pikeville finished the night rushing for 272 total yards. Leading the way was Connor Roberts who finished the night with 141 yards and a touchdown on 24 carries. Not to be out done was Zack Roberts who added 127 yards and two touchdowns on 29 carries. Connor Roberts completed 57% of his passes for 135 yards. On the receiving end of those passes were Christina Billiter, Jackson Hensley, Seth Pugh, and Kyle Watkins. Watkins lead all receivers with 74 yards on 5 receptions.

Belfry on the other hand was business as usual as they did all of their damage on the ground. Isaac Dixon led the stable of running backs for Belfry with 167 yards on 7 attempts and adding a touchdown. Fullback Brett Coleman carried defenders for 74 yards and a touchdown. Ben Bentley and Kevin Browning combined for 120 yards and 2 touchdowns.

One thing is for sure, these two teams will be making deep runs into the playoffs. Belfry, a class 3A powerhouse is entering district play this week as they travel to Sheldon Clark. Pikeville on the other hand will be traveling to Point Pleasant, WV.

Belfry may hold bragging rights over Pikeville for the next 365 days but these two rivals will be pulling for each other to bring home a state championship. Pike County has a lot to be proud of as these two teams and fan bases represented themselves well. Football may just a game but for these two schools it’s a way of life. Bluegrass Sports Nation wishes both teams the best of luck and we look forward to covering your runs for another State Title.