High School Football – BOBCATS CLAW THEIR WAY TO A 22-19 VICTORY OVER LESLIE WITH “HEART”. 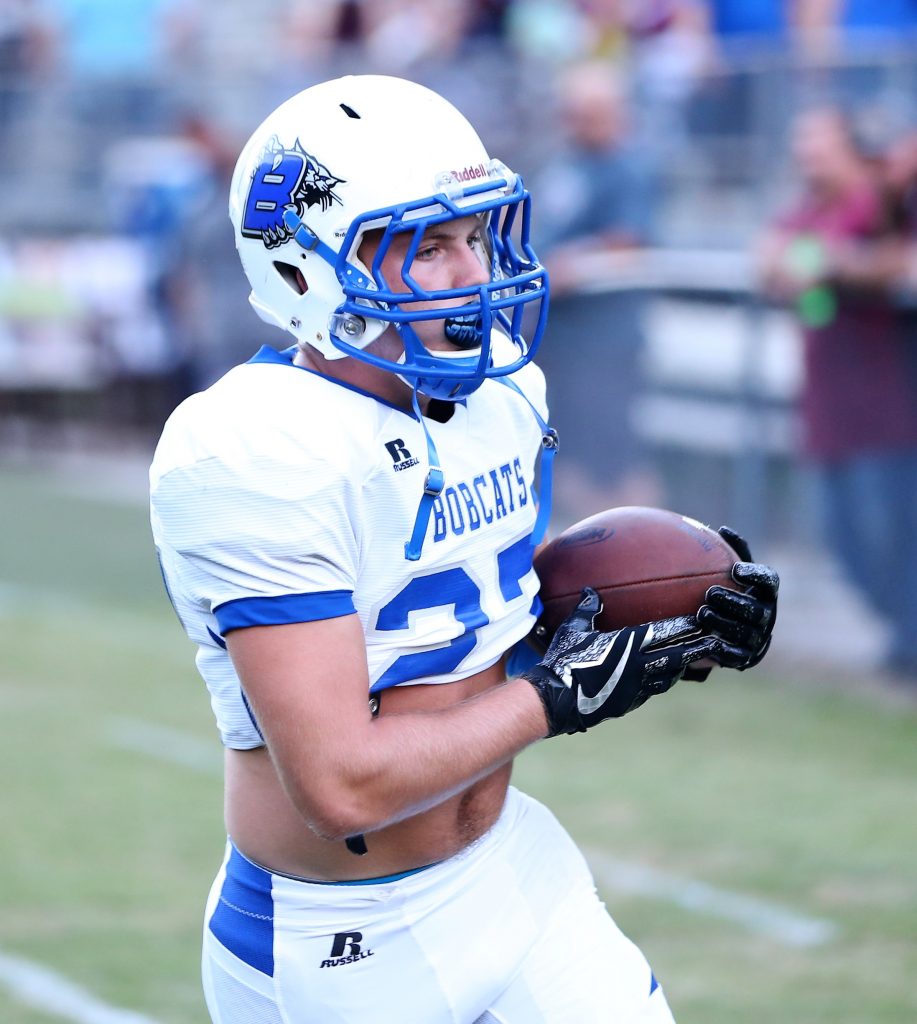 With the game in the balance, and under a minute on the clock, Breathitt Coach Kyle Moore dialed up a play that would not only decide this match up, but may shape the rest of the Bobcat’s 2018 season.  Braxton O’Hara connected with Jason Noble for 30 yards on a perfectly thrown ball for a spectacular touchdown to propel the Bobcats to a thrilling 22-19 victory over the Leslie County Eagles.

The Bobcats rolled into Hyden brimming with confidence coming off their first win of the season against Prestonsburg last week.  Coach Eddie Melton’s Eagles came into the game at 0-4 on the season, but played like their record should have been 4-0.  The Eagles were tough and physical and stalled the Bobcats’ high-octane offense for most of the game.

In days past when the likes of Tim Couch and Waylon Chapman faced off for these two schools,  points and yards were plentiful.  The same was not true of the first 24 minutes of this one.   The first half was a defensive stalemate, as the teams combined for six punts, two turnovers and zero points.

The second half was just the opposite with fireworks a plenty.  Leslie kicked off and recovered an onside kick at the BHS 48.  The Eagles drove the ball down the field in five plays and put the first points on the board on a Luke Lewis 11 yard run.  After the conversion failed, Leslie was on top 6-0.  After a Breathitt punt, Leslie again struck just two minutes later on a 75 yard pass from Zack Parker to Dylan Adams to increase the Eagle margin to 12-0 as the conversion again failed.

Breathitt fumbled the kickoff back to the Eagles, who then immediately fumbled the ball back to the Bobcats.  That is when the Bobcats finally got on the board on the first play of the possession on a 55 yard connection from O’Hara to Jacob Noble.  Tyson Noble ran in the conversion making it 12-8 Eagles.

Leslie had to punt on the ensuing possession and the Bobcats received the ball at their own 29.  The Bobcats drove the ball 71 yards on seven plays and took the lead for the first time on a 1 yard Tyson Gross plunge.  O’Hara ran in the conversion to increase the lead to 16-12.  The teams then again traded turnovers with Brandyn Slaughter intercepting a Parker pass in the endzone to stop a scoring drive, and then Trent Asher intercepted an O’Hara pass at the Leslie 23.  The Eagles then again cashed in the turnover on a 35 yard ramble by Preston Spurlock with 8:20 on the clock.  With the Taten Smith kick, the Eagles led 19-16.

Breathitt was again stymied and had to punt.  The Eagles drove the ball and were in the process of running out the clock when the Bobcats forced a fumble and recovered to give themselves a chance.  The Bobcats eventually moved the ball to the 30 for game winning score from O’Hara to Noble, with 27 seconds to go, benefitting from a helmet to helmet unnecessary roughness call on a hit on O’Hara by Adams.  Leslie had a last chance to score and take the game back, but were unable to score as the clock expired.

Breathitt was led on the ground by O’Hara who rushed 24 times for 103 yards with Tyson Gross adding 59 on 14 carries.  Leslie was led by Taten Smith who had 127 yards on 16 touches with Preston Spurlock adding 35 yards on a single carry.  O’Hara was 10 for 19 through the air for 169 yards and two touchdowns.  Leslie quarterback Parker was 12 for 27 for 246 yards and a touchdown.

Breathitt did suffer a huge blow in the second half when Senior linebacker and center Braxton Eiserman went down with a knee injury.  Eiserman did not return to the game and his status in unknown going forward.

When asked about the game, Coach Moore pointed to the Heart his team displayed to come back and take the hard fought victory.  The Bobcats have faced adversity since it was learned that Senior quarterback Cameron Sizemore would not be able to play to start the season.  Such adversity builds character, and these Bobcats have battled through, and are 2-3 as they and begin District play as Knott Central comes to Mike Holcomb Athletic Complex for Homecoming next Friday.  District games matter and the heart and character displayed and developed by the Bobcats on Friday Night may be a determining factor for this team going forward.

Bluegrass Sports Nation is your home for your Breathitt Football coverage.