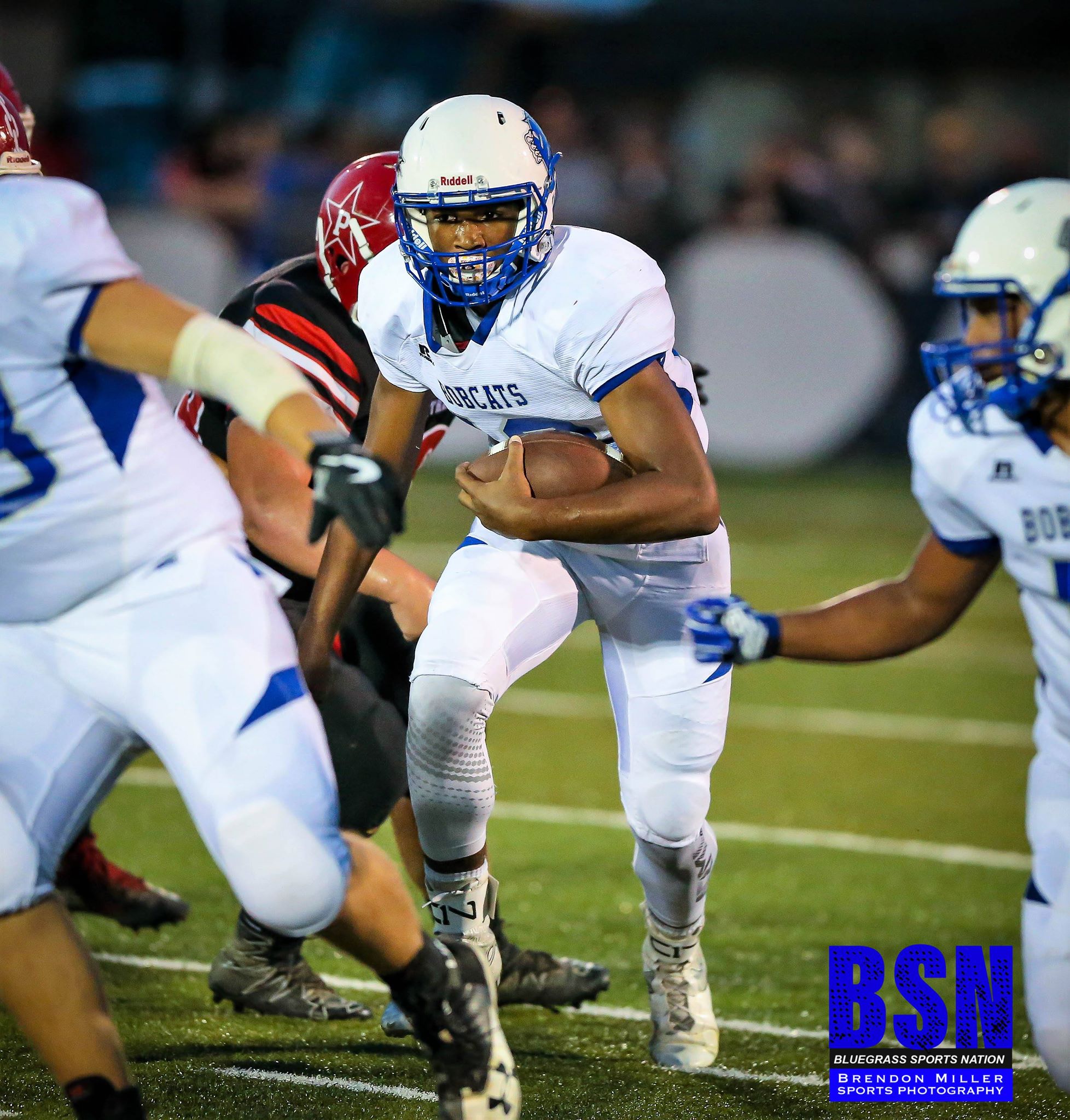 The Breathitt County Bobcats made the short trip to Perry County last night in hopes of getting their first win of the season.  The Bobcats were again tasked with yet another Class 5A team with enrollment that dwarfs that of Breathitt.  The Bobcats proved they were more than up for the challenge.

The Bobcat defense, who struggled last week, showed how scrappy they can be.  At the end of the first quarter, they had only allowed 14 points.  Perry Central took the opening kickoff and methodically moved the ball down the field on a nine play drive resulting in a 28 yard scamper by Jayden Neace, and with the conversion, the Commodores were on top 7-0.  The Bobcats were stopped on downs on their first possession, however a short punt led to a muff by the Commodore returner and possession back to the Bobcats.  On the next play, Bobcat Quarterback Braxton O’Hara hit Brandyn Slaughter for a 42 yard strike, and with the Jacob Noble kick, the score was tied 7-7.

With the score tied, Perry Central again drove down the field and scored on an 18 yard Jayden Neace run on the eighth play of the drive, putting the Commodores back on top 14-7.  The Bobcat were forced to punt, and then Perry Central again turned the ball over the Bobcats during the possession as Donavan Turner intercepted a deflected pass and returned the ball 36 yards to the Commodore 1.  With the opportunity to tie the game again, disaster struck, as O’Hara was stripped just inches before crossing the goal line and the ball bounded out the back of the end zone for a touchback and possession to Perry Central.

After the touchback, the Commodores drove the ball the length of the field in seven plays culminating in a Cameron Brown to Cade Miller touchdown pass, making it 21-7 Commodores with 2:38 to go in the half.  Again the Bobcats were forced to give the ball back to the Commodores before the half and it was costly.  After a couple of near interceptions, Jayden Neace busted loose for a 43 yard run as time expired in the half, making the half time margin 27-7 Commodores. Perry County Central finished the half rushing the ball 29 times for 298 yards.

The Bobcats took the 2nd half kickoff and drove the ball nine plays culminating on a six yard pass from O’Hara to Jacob Noble on 4th and goal, closing the gap to 27-13.  The teams would be dead locked for the majority of the 3rd quarter. That was until Jayden Neace decided enough was enough.  With 1:38 seconds remaining in the 3rd quarter, Jayden Neace broke several tackles on a 44-yard scamper to pay dirt making the score 34-13.  This wouldn’t just break the touchdown drought by both teams but would spark an offensive showcase in the 4th quarter.

Braxton O’hara the young gun slinger for the bobcats would explode for 240 yards and 5 touchdowns.  Three of those touchdowns would be completions to Brandyn Slaughter, and the two others would be connections with Jacob Noble.  Tyson Gross carried the ball 7 times for 50 yards and added a score of his own.  Although the Bobcats played with a lot of fight, the Jayden Neace led Commodores were just too much in the end.

Jayden Neace finished the night with 454 yards on 29 carries, adding 7 touchdowns to his already hot start to the 2018 season. Jayden Neace through 2 games has tallied 618 yards and 12 touchdowns.

After the game I caught up with Coach Ovie Canady. I asked him what his thoughts were on Jayden Neace’s performance thus far in the season. “I’m just glad he plays for us. He does a great job, I mean, he’s hard to stop. He is so strong, but the kid has earned every bit of it. He would lift weights before basketball practice, he would lift weights after basketball practice. Outside of that season he is there every day, he is one of the strongest 2 or 3 kids we have on the team.”

Although the Commodores are 2-0, Coach Canady wasn’t enthused about the amount of points the Commodores allowed. “Being the defensive coordinator it’s frustrating to allow that many points. We put ourselves in some of those situations with some of the stuff we did. We just got to clean up our own errors. A couple times we just got flat out beat. O’hara just out threw our coverage. I mean it happens, if they are faster than you, they are faster than you.”

A scary moment happened late in the game a Ethan Eldridge went down with a head injury. He was loaded into an ambulance and taken to the ARH Hospital in Hazard, Ky for further evaluation. Coach Canady was kind enough to give us an update on Ethan.  “He was moving and everything. He had feeling in all of his extremities. Any time you have a head injury, they are going to take you as a precaution.”

Bobcat Coach Kyle Moore, “Always disappointed with a loss but I love this team. They fought and kept making big plays.”  Speaking about the difference in the game, “I think the play before the half really hurt us.”

Perry County Central will be on the road next week as they will travel to Knott County Central for a date with the Patriots, who are coming off a win against Sheldon Clark 28-8. PCC has started the last 4 seasons 2-0, and are looking to start 3-0 for the second straight year.

Breathitt County will return home next week for the annual Honey Bowl as they face a red hot Floyd County Central team who have started their season 2-0 with wins over Harlan Independent and Betsy Layne. Both wins were by a score of 44-6. Breathitt will be looking to get their first win of the season in front of what should be a packed house.

As always stay tuned to www.bluegrasssportsnation.com or like our facebook page for all your local, college, and pro sports coverage. Stats provided by Steven Neace.