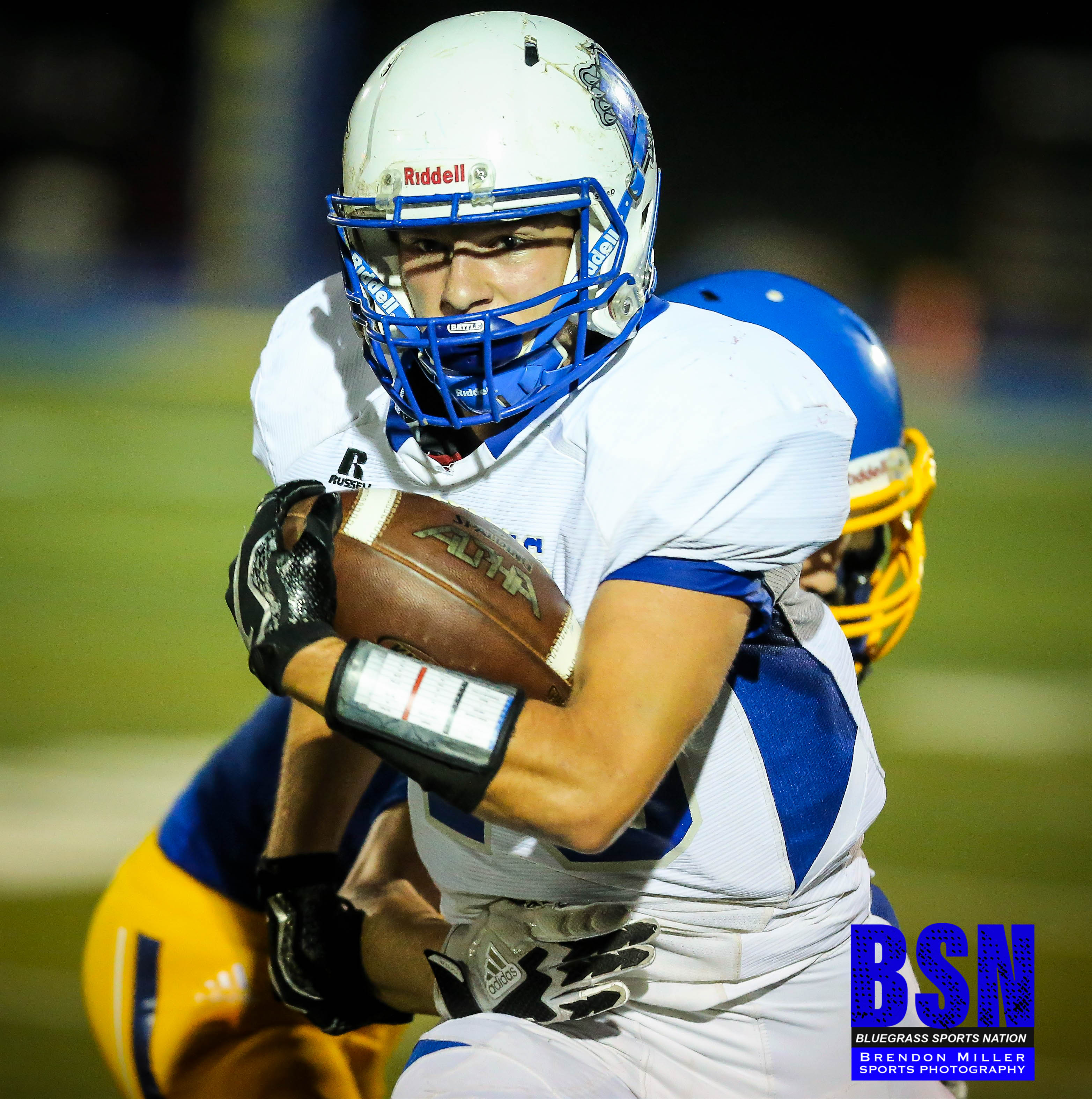 Breathitt made the short trip to West Liberty, Kentucky for a district showdown with the Morgan County Cougars.  With huge district implications on the line, this one was sure to be a real “Cat” fight. Morgan County came in 1-1 in District competition, and with a win, and winning out, they very well could have won the district title.  Breathitt on the other hand, held a 2-0 record in district competition and with a win would hold their own destiny in their hands.

Breathitt, as they have all year when winning the coin toss, elected to receive.  It didn’t take the Bobcats long to get things going as they only took 1:01 off the clock before Braxton O’Hara sprinted to the end zone from 38 yards out. The point after try was good by Jacob Noble, and the Bobcats scratched first 7-0.

On the ensuing drive the Morgan County would get some help from the Bobcat defense as they were called for roughing the passer on 4th and 11, giving the Cougars a drive saving first down, but would  fumble the ball at the goal line and the Bobcats quickly pounced on the loose ball at the 3-yard line

Taking over on their own 3-yard line, the Bobcats looked to put some distance between them and the Cougars.  As they did on their first drive, Breathitt played some smash-mouth and ran the ball behind their much-improved offensive line.  The drive culminated with a 19-yard run that you usually can only see in video games.  Braxton O’Hara juked left, right, and I’m almost certain he hit the “B” button as he found pay dirt.  Breathitt was unable to capitalize on the PAT and the score with 3:43 left in the first quarter was 13-0 in favor of the Bobcats.

Coach Mark Easterling’s Cougars came back on their next possession to drive the ball down the field and get on the board on a bruising Kaden Ballenger run.  The ball came out at the goal line but was ruled a score.  The score proved the Cougars wasn’t going to quit and at the end of the 1st quarter Breathitt led 13-6.

The 2nd quarter was difficult for both teams with the only score coming from the Bobcats on a 36 yard dash by Tyson Gross, extending the Breathitt lead to 19-6.  The defenses of each team stepped up and the game would not see another score for the rest of the 2nd or 3rd quarter.

On the very first play of the 4th quarter Morgan County’s dual threat quarterback Garrett Adkins connected with Cameron Bush on a wide receiver screen that put the Cougars within striking distance, at 19-12.  Unfortunately for the Cougars, the tandem at running back for the Bobcats Tyson Gross and Dalton Manns had had enough.

On the 1st play of the Breathitt possession, Coach Kyle Moore dial up a screen of his own as Morgan County had been blitzing their linebackers to stop the run.  Tyson Gross slipped out of the backfield and once he caught the pass from O’Hara, it was all she wrote as he took it to the house for a 67 yard touchdown reception.  Dalton Manns then added another score with just under seven minutes left in the game and the Bobcats now had some breathing room up 31-12.

It would be on the Breathitt County defense to seal the win as they have done the past 5 weeks. Senior Tyler Patrick intercepted a Cougar pass that ended any come back threat.  The Bobcats were unable to run the clock out and were forced to punt.  Tyler Patrick turned the Bobcat secondary into a no fly zone as he picked off his 2nd consecutive pass to seal it for the Bobcats.  Cameron Stacy would take the knee from the victory formation and the Bobcats win their 5th straight game.

Tyson Gross was his usual self, rushing for 155 yards and 1 touchdown on 14 attempts. Braxton O’Hara added 126 yards on 16 carries and 2 scores on the ground.  Tyson also added a receiving touchdown for the Bobcats.  Dalton Manns put the icing on the cake with his 40 yards and a score on 4 carries.

While Breathitt gained control of the ball game focus for the Bobcat Faithful quickly turned to the Powell County/Estill County ball game that was happening just down the road in Stanton.  When Bluegrass Sports Nation left West Liberty the last update we had received was that both the Engineers and Pirates were knotted up at 22 apiece.  When we arrived back in Jackson, we found out that Powell had edged Estill by a score of 43-22.  This sets up a massive game next Friday on the River Bank as Powell County will the Bobcats in what is will almost certainly for the District Championship.

After talking to Coach Moore on the ride home last night, we at Bluegrass Sports Nation will be asking all the Bobcat fans to fill Mike Holcomb Athletic Complex next Friday Night and bring their best to support the Bobcats and be “ALL BLUE” at the game as we will “PAINT THE BANK BLUE!!!”, for the matchup!

Morgan County still has hopes to make the playoffs as they travel to Knott County Central next week. That game might as well be a playoff game for the Cougars and Patriots as the loser is eliminated from playoff contention.

District Titles are up for grabs and playoff spots are still to be determined as we enter week 9 of the high school football season.  Stay tuned to Bluegrass Sports Nation as we keep you up to date on all the action as the playoff picture begins to take shape. You can do so by liking our Facebook Page, and visiting our website at www.bluegrasssportsnation.com daily.

Thanks to our Sponsors:  First National Bank of Jackson, Lakeside Homes of Jackson, Breathitt County Tire, and Ison Insurance Agency of West Liberty.