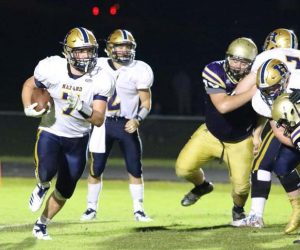 Hazard traveled to Somerset Friday night for what has been an intense rivalry over the last 8 years. Coming into the game the Briar Jumpers lead the series 4 games to 3 in the previous 7 meetings. Somerset had beaten Lincoln County and Williamsburg the first 2 weeks of the season, but had fallen 28-0 to 1A powerhouse Beechwood the week before in a weather shortened affair. The Bulldogs were seemingly rolling through opponents, scoring 86 points in their first two games of the season and giving up an average of 20 points per game against Harlan County and Letcher County Central. Hazard knew going into this game that Somerset was going to be the stoutest competition they’d faced in this early regular season but would be a good measuring stick to gauge where they stood in order to make a run at a regional title. The tipping point of the night didn’t come in the form of offense or defense. Somerset won the night on the special team side of the ball.

The game started off rough for the Bulldogs. On the first play after the opening kick off, they fumbled and gave great field position to the Bunnies. The Bulldog defense held strong, however, and forced Somerset to settle for a field goal. Hazard answered with a touchdown and a field goal of their own making the score 10-3. The field goal would be the last time Hazard scored on the night. Just before half Hazard kicked off and allowed the Briar Jumpers to return the kick 60+ yards for a touchdown to bring the score to 10-9. Hazard made a special team play of it’s own to retain the lead with a blocked extra point by Isaiah Stupart. The first half of the game ended much like most people thought it would with both teams playing physical up front and giving little on both sides of the ball.

The second half would only see two scores. Again, special teams play hurt the Bulldogs as they gave up a 50+ yard punt return. It was a back and fourth battle for most of the half after that. Hazard forced 3 turn overs (2 fumbles and an interception) but were unable to get the ball to the end zone against a stiff Somerset defense. The final score of the game came on the ground late in the 4th quarter after the Bulldogs turned the ball over on downs. The Briar Jumpers stayed with the ground attack, chewed up clock, and finally punched it in with less than a minute to go to make the final score 24-10.

On the night, Blair finished 11/24 for 157 yards with 0 TD’s and 1 interception through the air. Pelfrey gained 122 yards on 21 carries, Blair gained 35 yards and 1 touchdown, and Campbell gained 14 yards on the ground for a total of 171 yards rushing. Receivers on the night were led by Fletcher (64yds), followed by Baker (56yds), Pelfrey (25yds), and Johnson (12yds). Jonah Helm rounded out the scoring with 1 extra point and a 25 yard field goal.

Hazard will have an open week next Friday that will allow the team to heal up some bumps and bruises and refocus after this defeat. Moving forward, the Dogs need to shore up the special teams play and continue to get better offensively and defensively as they had the previous two weeks. The Bulldogs will host the Blackcats of Prestonsburg at Daniel Field on Friday September 21st at 7:30pm. That will be the last game before Hazard starts district play against Pikeville, at Pikeville on September 28th .