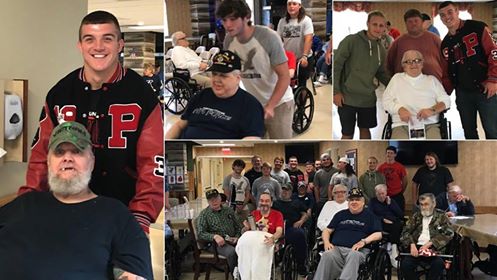 Seniors with the Perry County Central High School football team spent a few hours Tuesday with the heroes from the Eastern Kentucky Veteran’s Center.
The Commodores helped move the veterans from their rooms to a ceremony in remembrance of September 11, 2001. Commodore Coach Ovie Canady said the experience was humbling.
“We want to thank them all for their service and for allowing us to be a part of things today. They have seen and done more than we could ever imagine; things that would probably frighten most of us,” Canady said. “Thank God for them all.”
While the focus of the event was remembering 9/11 and helping out our local heroes, the Commodores ended up making some friends along the way.
“The boys were great.” District Athletic Director Eddie Browning said. “The veterans enjoyed them so much that they started asking to come and watch the boys play.”
School officials said they wanted to send out a special thanks to EKVC’s Administrator Neil Napier and Maintenance Director Greg Hall for all their help and giving their kids the opportunity.
Related TopicsHS Football