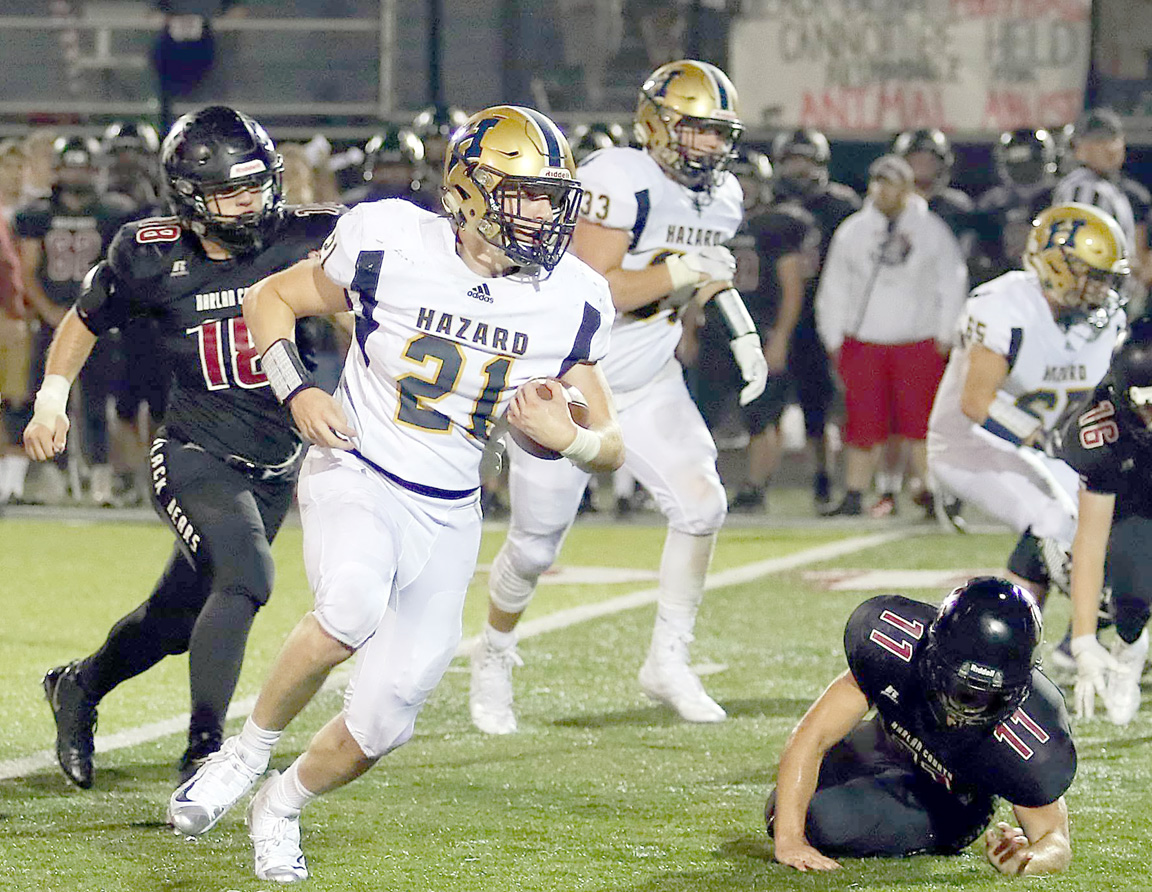 The ride home Friday night was an easy one for the Hazard Bulldogs after a 43-26 win over defending 5A District 8 Regional Champion Harlan County. This was Hazard’s season opener and the Black Bear’s home opener for the 2018 campaign. Both teams were looking for their first win after Harlan County fell at Ashland last week to the Tomcats 49-6. That contest was much closer than the score indicated after Ashland took advantage of several turnovers by the Black Bears with their speed and big play capability. Hazard was fresh off the completion of their scrimmage schedule after handling Pike Central with ease in the first contest and then running into some resistance with the perennial power Belfry Pirates. That scrimmage may have been what tipped the scales, defensively, in Hazard’s favor against the Black Bears, though. Both the Black Bears and Pirates run a similar option offense and Hazard had week to fix mistakes they made against the Belfry offense in preparation for the Harlan County game.

The Black Bears found the end zone on the first possession of the game. The Bulldogs had a few opportunities to stop the drive, but early season jitters and missed assignments allowed for a long sustained drive for Harlan County. The Bulldogs immediately answer, however, with a drive of their own that marched down the field with little resistance. The Bulldogs converted a two point conversion and went up 8-7 after one possession by each team. It didn’t take the Black Bears long to answer as their next drive was only one play. That would be the last time Harlan County would own the lead. The Bulldogs answered again and after a couple of defensive stops allowed them to settled into the game and hold off the Black Bears.

Through the preseason the Bulldog offense has looked unstoppable at times and has the potential to be explosive as the season progresses. Bailey Blair was everything you would want out of your senior quarterback. He was 12/15 passing for 178 yards and 1 TD. His targets for the night was led by senior Andy Baker (6 catches for 81yds) and other targets included Kyle Johnson (2 catches for 63yd), Mason Collins (1 catch for 22yds), Andrew “Smiley” Ford (1 catch for 9yds), and Skylar Pelfrey (1 catch for 3yds). The rushing attack for the Bulldogs was led by Skylar Pelfrey who racked up 135 yards on 12 carries. Reece Fletcher saw limited, but very productive, action with 78 yards on just 3 carries. Trajon Campbell had 52 yards on 3 carries and Bailey Blair had 34 yards on 11 carries. The offense also got a boost from Jonah Helm who was perfect on the night and added 5 extra points.

The defense was solid, for the most part of the game, after a shaky start. The Bulldogs were playing some new faces on defense after some minor injuries during the Belfry scrimmage and an incredible total of 23 players recorded tackles for the defense and special teams. The new guys fell right in to place after a few downs and earned some valuable early season playing time in a big game situation. The defense was led by Reece Fletcher and Andy Baker who had 11 tackles each. Other players recording tackles included Skylar Pelfrey (8), Jacob Brashear (7), Ben Adams (6), Trajon Campbell (5), Ryan Davidson (5), Zane Deaton (5), Parker Holbrook (5), Hootie Thomas (5), Mason Collins (4), Bryson Sayers (4), Tyson Turner (4), Kaleb Eversole (4), Matthew Couch (3), Kyle Johnson (3), Cameron Caudill (2), Nick Combs (2), Campbell Davis (2), Ryan Dean (2), David Cornett (1), Dalton Strong (1), and Nate Smith (1). Nick Combs also had 1 touch back on kick off and 1 punt for only a 3 yard return.

The Bulldogs will continue to be on the road for the next 2 weeks as they travel to Letcher County Central on August 31st at 7:30pm and Somerset on September 7th at 7:30pm. That will be followed by an open week and their home opener will be against Prestonsburg on September 21st at 7:30pm on Hazard’s Daniel Field.