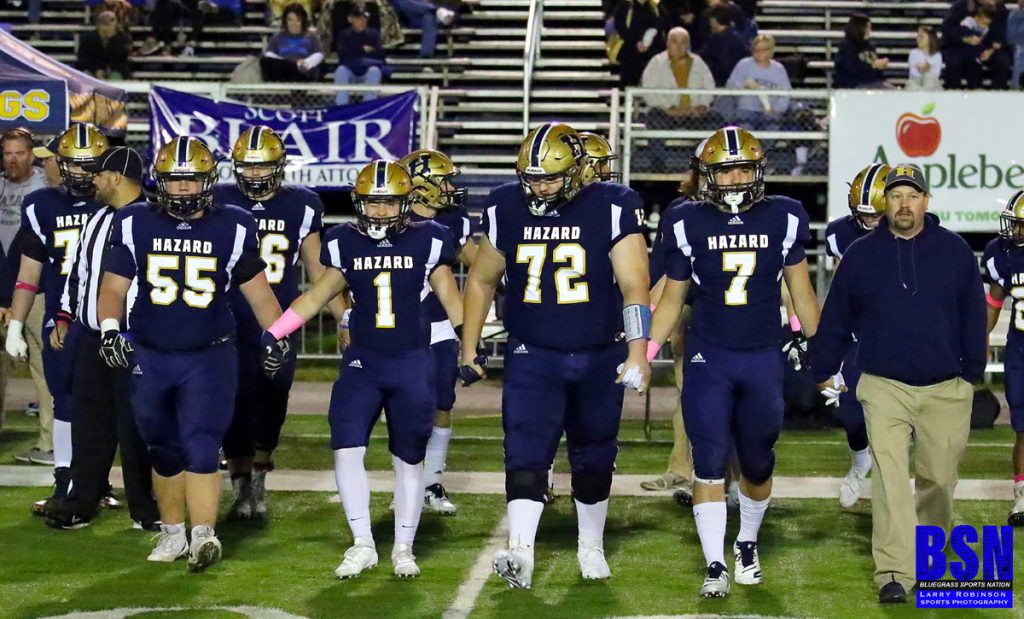 One thing that that the Williamsburg Yellow Jackets have done this year is find the end zone. With one of the most potent offenses in the state, the Bulldog defense will be tested all night long in the second round of the KHSAA Commonwealth Gridiron Classic this Friday night in Williamsburg. This should be one of the better second round games from around the state. Williamsburg will enter the game at 8-2 and Hazard will bring a 7-3 record to the contest. They have four common opponents and both have lost to 2 of those opponents. Williamsburg lost Paintsville 19-13 and Somerset 34-7. Hazard lost to Paintsville 38-37 and lost to Somerset 24-10. Both won against Leslie County and Harlan with the Yellow Jackets winning 40-30 and 41-14 and the Bulldogs winning 41-7 and 51-34, respectively. On paper everything between the two teams looks very evenly matched with the slight edge going to the Yellow Jackets in points scored with 419 compared to Hazards 355. The Bulldogs do take the defensive advantage though, only giving up 215 points compared to 228 given up by Williamsburg. Williamsburg has thrown for 2,582 yards this season compared to Hazard’s 1,852. Hazard has rushed for 2,157 yards opposed to the Yellow Jackets 1,799 yards on the ground. Both teams also have 14 interceptions on defense. I would give the strength of schedule nod to Hazard, but not by a lot.

Williamsburg has one of the best athletes in 1A football in #10 Dalton Ponder. Ponder has thrown for 2,528 yards this season and rushed for 1,160 yards. This dual threat QB has 30 touchdown passes against only 6 interceptions. What makes Ponder so dangerous is that most of his rushing yards have came on scrambles instead of drawn up run plays. He has the ability to bail out his receivers when being covered up, by using his legs. This makes it very hard on a defense because they must play their assignment each play or Ponder will have the ability to make you pay. They have 4 receivers that are all likely targets with none really standing head and shoulders above the others. #2 Gavon Thomas leads the receivers with 747 yards on 35 catches, but followed close behind is #8 Caleb Rose who has 637 yards on 40 catches, #13 Eli Mattingly who has 615 on 32 catches, and DeVonte Powell who has 408 yards on 26 catches. Ponder is their leading rusher with 1,160 yards on the ground. Offensively Williamsburg has racked up 4,381 yards this year.

The Hazard Bulldogs do own the offensive edge in one category, rushing. The Bulldogs have rushed for over 300 more yards than the Yellow Jackets this year. That number could have very well been higher though, considering the Bulldogs leading rusher, Skylar Pelfrey has been rested the last few weeks to heal up for a playoff run. That advantage is due in large part to the Bulldogs big offensive line that has opened holes for all running backs this year, allowing the Bulldogs to pull in 2,157 yards on the ground. This run threat has also allowed Hazard quarterback Bailey Blair to put up great numbers this year, as well. Blair has 1,852 yards passing with 14 touchdowns through the air to go along with 353 yards rushing. Leading all receivers for Hazard is Isaiah Stupart with 441 yards. Stupart has come on offensively in the second half of the year and has become a legitimate threat to defenses with both his quickness and speed. Much like Williamsburg, Hazard will usually have 4 receivers on the field at all times that are capable of making big plays. Andy Baker, Kyle Johnson, Reece Fletcher, Mason Collins, and Andrew Ford have all had big catches for the Bulldogs this season. In short yardage situations, the Bulldogs have another advantage with Collins and Fletcher both being big bodies that can catch a ball over the middle.

On Friday night we will find out who is better, Hazards defense or Williamsburgs offense. Hazard has put some points up on the board this year, also. If the Bulldogs can get a couple of turnovers then they will be well on their way to moving on to round 3. The forecast for Friday night is 100% rain. It’s also going to be cold. Those conditions favor the Bulldogs and their rushing attack if the big men up front can get movement on the Yellow Jacket defensive line and line-backing corp. This should be a great game to watch and these Bulldogs need all the support they can get on Friday night. Kickoff is set for 7:30pm in Williamsburg.

Also a big thanks goes out to our sponsors this week with Scott Alexander – Perry County Judge Executive, Dream Homes & People’s Bank and Trust. If your by theirs, or any of the other businesses that have sponsored these games this year, be sure to thank them for bring you coverage of our local high school athletics!