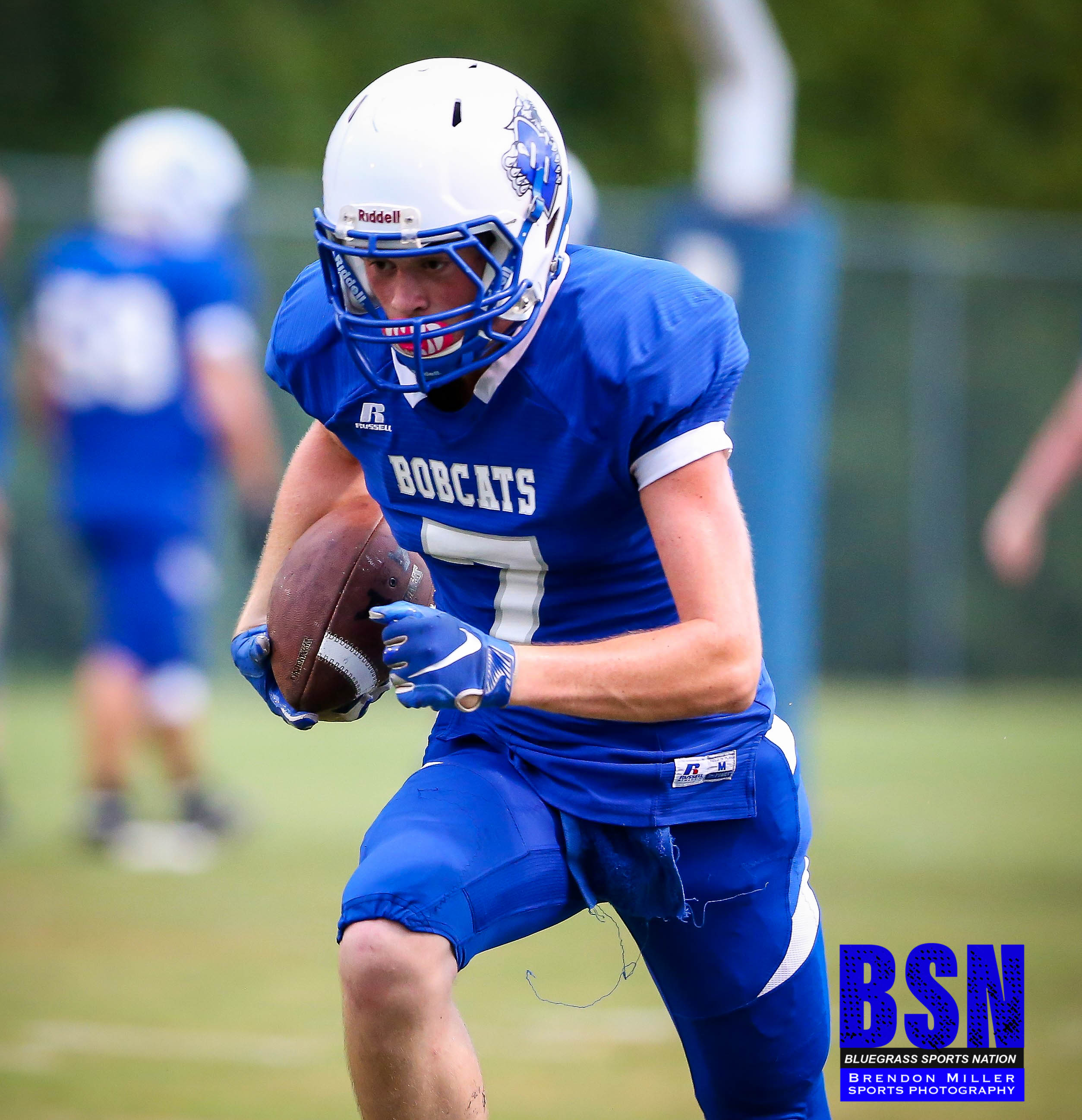 As the rain came pouring down in Jackson, Ky the Beathitt County Bobcats hoped get off a 2 game skid. Floyd Central on the other hand wanted to keep the train rolling as the Jaguars were 2-0 coming into the game. Something had to give as both teams took the field.

Breathitt won the coin toss and elected to receive. On the opening kickoff however, the Bobcats would fumble a wet football, and set Floyd Central up inside Bobcat territory. Floyd Central would methodically drive the ball to the 3 yard line were the Bobcats defense stood their ground and made an impressive goal line stand.

The Braxton O’Hara lead offense took the field with 97 yards between them and their first lead of the season. Three plays later, he would air it out for a 67 yard bomb to wide receiver Brandyn Slaughter. The Bobcats converted the 2 point conversion and for the first time this season Breathitt County had a lead 8-0.

Floyd Central answered driving the ball down the field and scoring on a Josh Whitaker 8 yard run. Floyd Central failed to convert the point after try leaving the Bobcats with a slim lead 8-6.

Both defenses would take over as the playing conditions got worse. The Bobcat defense come up big not once but twice on 4th and short. O’Hara and Slaughter would again hook up for a Bobcat touchdown. O’Hara would top the drive off with a 2 point conversion and the scoreboard would show 16-6 in favor of the Bobcats. Breathitt would go into the half with a 10 point lead. Braxton O’Hara in a torrential down pour was making it rain himself going 6 of 10 for 137 yards and 2 touchdowns.

The weather would play a huge factor in the second half as O’Hara only completed 1 more pass. Breathitt would lean heavily on their run game O’Hara proved his dual threat ability as he would lead the rushing attack for the Bobcats as well. He finished the night with 22 carries for 137 yards. Tyson Gross added 44 yards on 6 carries.

With the Bobcats offense slowing down, Floyd Central would do what they know best, which is handing the ball off to their workhorse of a running back Josh Whitaker. Whitaker would keep the Jaguars in the game and ultimately tying the score late in the 4th quarter. With just over 6 minutes left the Jaguars knotted things up at 22.

The Bobcats defense once again stepped up and forced the Jaguars into a 4th down a long scenario. Coach’s son Caleb Hager would throw the ball deep into Breathitt territory were his receiver was able to come down with the ball inside the 10 yard line. With time running out the Bobcats attempted another goal line stand, but Josh Whitaker would not be denied. With 25 seconds left on the clock Floyd Central took their first lead of the night. Breathitt was unable to answer and your final score from the River Bank would be 28-22 in favor of Floyd Central.

If you weren’t in the stands for this one you absolutely missed out. The Bobcats showed they are on their way back. Fighting tooth and nail to the very end. Talking with Coach Moore after the game he emphasized that, “I couldn’t be more proud of my guys of their fight and willingness to do what we ask them to do. We are close!”

The Bobcats will be home next week with as they host the Prestonsburg Blackcats. The Bobcats may be 0-3, but they are well on their way. With District play just around the corner, Breathitt will be looking to fine tune themselves as they bid for the 3A District 7 championship. As always stay connected to all things Breathitt Football with us here at Bluegrass Sports Nation. You can do that by liking our facebook page, or visiting us at www.bluegrasssportsnation.com.